India vs England: Twitter was abuzz with congratulatory messages for Team India after they thrashed England in the second Test to level the series 1-1. 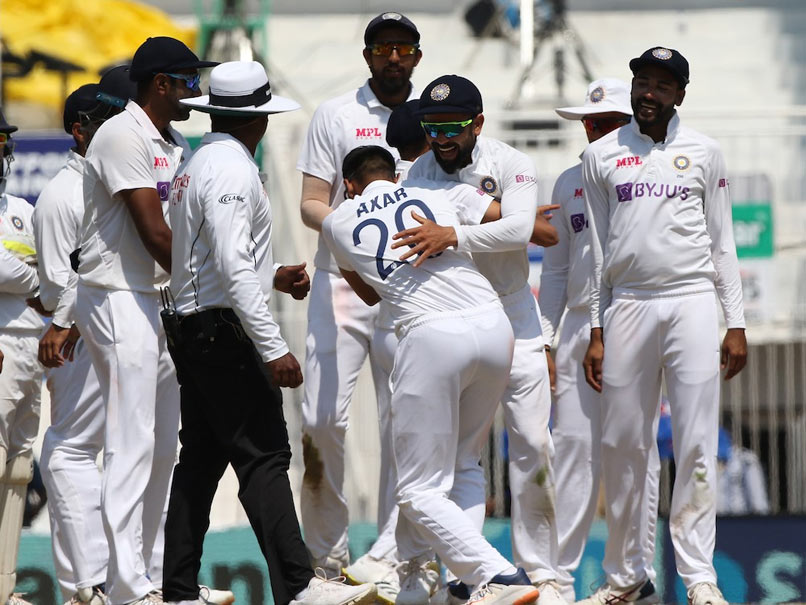 IND vs ENG: India thrashed England by 317 runs in the second Test in Chennai.© BCCI

India thrashed England by 317 runs in the second Test at the MA Chidambram Stadium in Chennai to level the four-match series at 1-1. Having lost the opening Test by 227 runs, India came roaring back to outclass the visitors from start to finish. On a pitch that took turn from Day 1, Indian spinners, led by Ravichandran Ashwin, came into their own and tormented the English batsmen. With the bat, Rohit Sharma was India's hero in the first innings, while Ashwin, who took a total of eight wickets in the match, hit a sensational 106 in the second innings.

A Test which will be known for #RohithSharma and #Ashwin , let us also salute debutant @akshar2026 . 5-wicket in his first Test and so many big wickets. Well done #axarpatel . Wish you all the best for future. Congratulations team India for a tremendous comeback #INDvsENG

India played well to win to this test and will win the series too. #INDvENG

When the going got tough the tough got going. Terrific team performance @ImRo45 @ajinkyarahane88 @RishabhPant17 @imVkohli @ashwinravi99 @akshar2026 all superb Building up to be a cracking series. Can't wait for the pink ball test at the new @GCAMotera stadium! #INDvsENG pic.twitter.com/ikdh76WWNF

India went into the match after being outplayed by Joe Root and England in the first Test in Chennai. Despite the second Test being held in the same venue, the pitch for the second Test had a very different look to it.

India won the toss and elected to bat but suffered a setback almost immediately as Shubman Gill was dismissed for a duck. Rohit Sharma took centre stage on a pitch that was already starting to crumble.

Along with vice-captain Ajinkya Rahane, Rohit put India in a position of strength as India posted 329 in the first innings. Rohit was dismissed for a brilliant 161 while Rishabh Pant provided some late fireworks to notch another half-century.

England were on the backfoot from the get-go with Ishant Sharma dismissing Rory Burns in the first over. Ashwin and debutant Axar Patel then went about dismantling the opposition with the former notching his 29th five-wicket haul in Test cricket.

England were bowled out for a paltry 134, conceding a massive lead to India.

India came out to bat in the second innings with purpose. But a flurry of wickets on Day 3 morning provided England a ray of hope. Virat Kohli and Ashwin, though, finished any chance of an England revival with a fine 96-run stand.

Ashwin went on to hit his fifth Test hundred as England were made to toil with India setting a mammoth 482-run target.

The Indian spinners once again came to the fore in the second innings, taking all the 10 wickets to fall. Axar Patel registered a maiden five-wicket haul, Ashwin had three dismissals to his name, while Kuldeep Yadav chipped in with two wickets.

Joe Root India vs England 2020-21 India vs England, 2nd Test Cricket
Get the latest updates on Fifa Worldcup 2022 and check out  Fifa World Cup Schedule, Stats and Live Cricket Score. Like us on Facebook or follow us on Twitter for more sports updates. You can also download the NDTV Cricket app for Android or iOS.