Virat Kohli has been in the thick of things ever since the series between India and Australia began in Pune with many critics talking about his nature and how he would react to instigation. 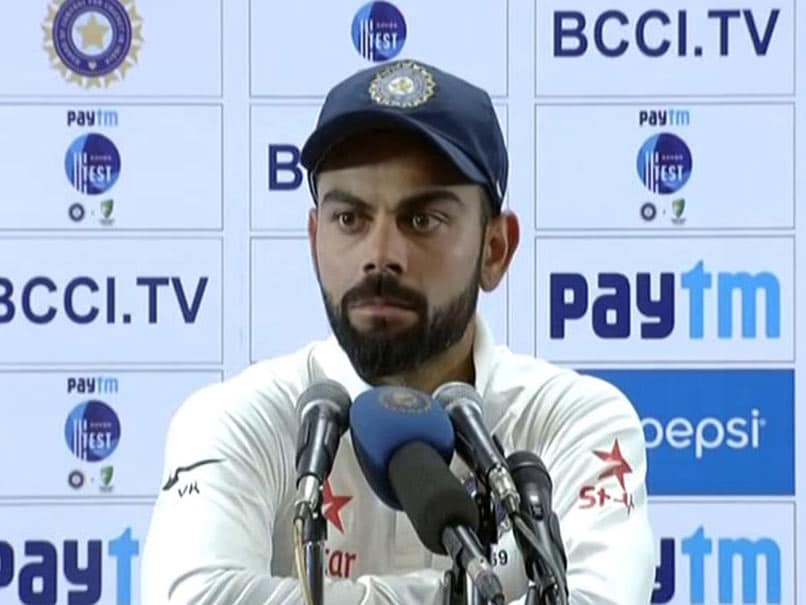 If there was any hope of things simmering down between India skipper Virat Kohli and the Australians at the end of the four-Test series, those hopes seem to be futile with Kohli making it clear that Australians were no longer his friends after the manner in which they went after him during the series. This is an issue that could well be kept on simmer till the main characters of the plot face off again for the Indian Premier League (IPL), beginning from April 5.

Asked after the end of the Dharamsala Test if he still considered Steve Smith's men his friends off the field as he had said at the start of the series, Kohli gave a very definite answer.

Virat: I think this is our best series win so far #INDvAUS

He was a constant target, especially after the Bengaluru 'brain fade' issue and was in the thick of things with former players questioning his attitude and intentions and the Australian media comparing him to United States President Donald Trump among other things.

Even Cricket Australia (CA) chief executive officer James Sutherland took a dig at him, saying Kohli perhaps does not know the spelling of sorry.

Things did not improve at any time during the series with Kohli's injury in Ranchi and Murali Vijay's catch off Josh Hazlewoood in Dharamsala all becoming issues.

Kohli ensured he had the final say on how the entire series was fought. He made it clear that his team was highly motivated and would give it right back when poked.

"Regardless of whether we are on top or not, we speak, if something pokes us we speak and give it right back," Kohli said.

"All people don't digest it well but we take it very well and we give it back even better," Kohli told official broadcasters 'Star Sports'.

Kohli was indifferent to the criticism.

"Some people want to create some spice sitting at some part of the world. They don't confront such situations themselves. The easiest thing to do is to just sit at home and write a blog or speak on the mike but to go out there and bowl and bat is different," he said.

Kohli said he was thoroughly enjoying the responsibility of leading a motivated side.

"I like taking responsibility, every game that I play for India is an opportunity to do something special with my skills. I like getting involved in the game. The workload is something that needs to be kept in mind in future but right now when the body is responding well I am fine," he said.

"It's been unbelievable. This is our best series win so far. The way we bounced back from World No.7 to No.1 has been outstanding achievement and I am proud as a captain.

"I thought (the series against) England was intense, but the way Australia gave us a fight it was amazing on their part but our guys kept bouncing back. We showed true character and maturity. The guys handled themselves well," he added.

He lauded stand-in skipper Ajinkya Rahane for the win in the fourth Test. "Ajinkya led the team really well. It was very pleasing to see that from the outside."

Speaking about his recovery from the shoulder niggle, Kohli said he will be back to full fitness in a few weeks.

"It's still a few weeks to go till I can be 100 per cent on the field. You have to take it in your stride and move forward," he said.

Comments
Topics mentioned in this article
India Cricket Team Australia Cricket Team Virat Kohli Steven Smith India vs Australia 2017 Cricket Himachal Pradesh Cricket Association Stadium, Dharamsala
Get the latest updates on SA vs IND 2021-22, check out the Schedule and Live Score . Like us on Facebook or follow us on Twitter for more sports updates. You can also download the NDTV Cricket app for Android or iOS.