India vs Australia has been the stage from some superb performances. 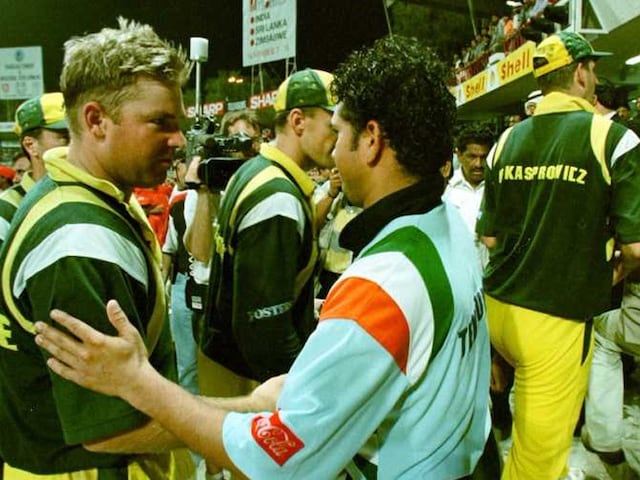 India and Australia have been involved in some of the fiercest rivalries in the past, be it Gautam Gambhir and Shane Watson, who were charged with 'spirit of the game' offences after being involved in an altercation in the 2008 Border-Gavaskar trophy, David Warner coming out all guns blazing with his verbal battles, or Virat Kohli's famous run-in with the visitors. On the field, one can't forget master blaster Sachin Tendulkar's stupendous batting in 1998 against Australia in Sharjah and Yuvraj Singh's vital innings in the quarter-final of the 2011 World Cup. As the two teams get set to face off in the yet again ODI series, let's take a look at the top five memorable knocks from both the countries.

One cannot forget Rohit Sharma's blistering knock against Australia on November 2, 2013, when he became the 3rd player in the ODI history to score a double century after Sachin Tendulkar and Virender Sehwag. Rohit went berserk as he reached the milestone off just 156 balls, ending his innings at 209 off 158 balls, that included 16 sixes and 12 boundaries.

The right-hander became the Man of the Match and Man of the Series with an aggregate of 491 runs at the average of 122.75.

Australian all-rounder James Faulkner was known more for his bowling skills than batting before Australia's 2013 tour in India. In the third ODI against the hosts, Faulkner's 64-run knock off just 29 balls changed the perception as it showed his colours with the bat, helping his team chase down 304.

In the seventh ODI of the same series, he proved that the innings in the third ODI wasn't a fluke as he scored the fastest ODI century for Australia. Though the 10th fastest ton ODI ton ever went in vain but Faulkner got worthy applause for his outstanding effort.

Ricky Ponting's century in the 2011 World Cup quarter-final in Ahmedabad helped Australia score 260. In reply, Sachin Tendulkar and Gautam Gambhir scored fifties, but the opposition was in control of the situation till the time Yuvraj Singh's fine and crafted innings started.

India lost Dhoni for seven and were then 187 for five, needing another 74 from 75 balls. Yuvraj, along with Raina, helped India reach semi-finals with his well-made 57 off 65 balls. Earlier, he bowled 10 overs for 44 runs and picked up the wickets of Brad Haddin and Michael Clarke.

If Australia captain Ricky Ponting's innings in the final of the World Cup 2003 is unforgettable for Australian fans, it has not dimmed in the minds of the Indians either. His 140 off 121 balls took the game away from India as it crushed their hopes of winning the World Cup.

He remained unbeaten on 140, smashing four fours and eight sixes as Australia put up a mammoth total of 359/2 in 50 overs. They went on to win their third World Cup after India were bowled out for 234.

This was the day when the Australians faced Sachin Tendulkar's wrath. The year 1998, which was Sachin Tendulkar's best cricketing year by far, proved to everyone that India was the team which could beat anyone and get the better of all odds. In the league match at Sharjah, India needed to keep their net run-rate better than the third team, New Zealand, to keep their hopes alive to qualify for the finals of the Coca-Cola Cup.

The match was interrupted more than once due to desert storms, but Tendulkar stood tall and smashed the Australians to all parts of the park and not only helped India qualify but helped his nation earn a famous victory. Tendulkar's innings was studded with 9 boundaries and 5 massive sixes.