ICC Champions Trophy Highlights, India Vs Bangladesh: Rohit Sharma notched up his 11th ODI century (123* off 129), while Virat Kohli scored an unbeaten 96 off 78 balls as India crushed Bangladesh by 9 wickets in the second semi-final of the ICC Champions Trophy 2017 at the Edgbaston Cricket Ground in Birmingham on Thursday. 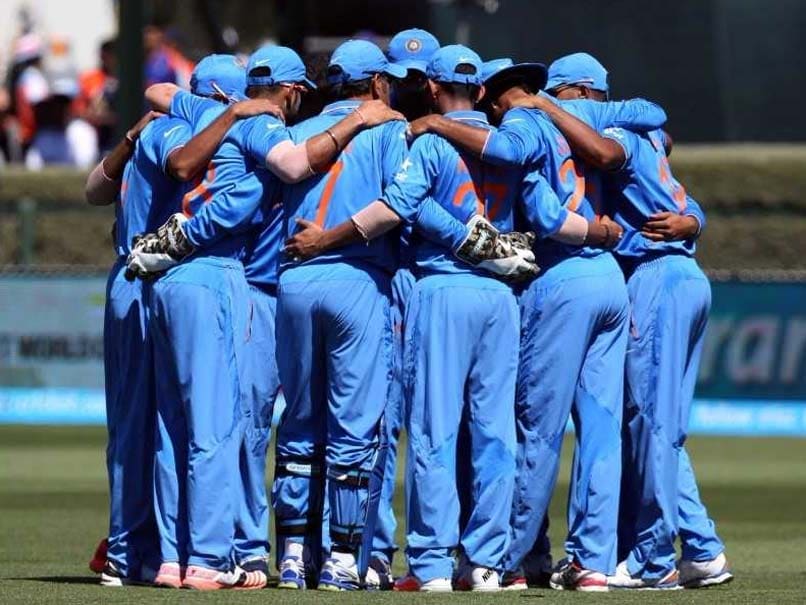 Rohit Sharma notched up his 11th ODI century (123* off 129), while Virat Kohli scored an unbeaten 96 off 78 balls as India crushed Bangladesh by 9 wickets in the second semi-final of the ICC Champions Trophy 2017 at the Edgbaston Cricket Ground in Birmingham on Thursday. The defending champions will now face arch-rivals Pakistan in the summit clash on Sunday. Apart from Rohit and Kohli, opener Shikhar Dhawan laid the foundation of India's chase with a brilliant 46 off 34 balls. Rohit Sharma was adjudged Man-of-the-Match for his match-winning ton. (SCORECARD)

19:39 IST: India crush Bangaldesh by 9 wickets to enter the ICC Champions Trophy 2017 final. They will face Pakistan in the summit clash on Sunday.

Of course Player of the Match is @ImRo45 after that incredible #BANvIND #CT17 pic.twitter.com/vuqe8fEAU4

19:34 IST: FOUR! Virat Kohli goes on backfoot and slaps the ball over square leg for a boundary.

19:30 IST: FOUR! Virat Kohli opens the face of the bat, uses the pace and guides Shakib towards fine leg.

19:28 IST: Shikhar Dhawan, who laid the platform in India's chase, is watching from the dressing room. He has a big smile on his face. He is the superstar of Champions Trophy.

19:26 IST:FOUR! Taskin Ahmed starts his seventh over. Virat Kohli welcomes the pacer with a stunning boundary towards backward point. India 233/1, need 32 off 82 balls.

19:20 IST: FOUR!Rohit opens the face of the bat and sends the ball towards mid wicket. Excellent placement from him.

21:12 IST: CENTURY! Rohit Sharma brings up his 11th ODI hundred off 111 balls. Second vs Bangladesh and 1st in Champions Trophy.

Less than 100 needed now for India with 9 wickets and 24 overs remaining - is there a twist in the tale to come? #BANvIND #CT17 pic.twitter.com/6b5XF8E0hF

20:34 IST: FOUR!Rubel Hossain starts his sixth over. Classy shot from Virat Kohli. He takes a long stride and drives the ball towards deep extra cover for a boundary. India 147/1 in 22.3 overs, need 118 runs to win.

20:22 IST: FOUR! Excellent use of the feet from Virat Kohli. It's a half volley from Mustafizur and Kohli drives this straight down the ground. India 124/1 in 20 overs, need 141 runs to win.

Look who was at the Champions Corner at Edgbaston today - #CT17 Champion Ambassador @Ian_Bell! pic.twitter.com/EDNI2QAk46

20:17 IST: FOUR! Rohit waits for the ball and pulls it towards backward square leg.

20:12 IST: Mustafizur Rahman is back into the attack. This is his third over.

20:04 IST: FIFTY! Rohit Sharma brings up his half-century off 57 balls. Brilliant knock from the opener. Can he convert his fifty into a hundred?

20:03 IST: FOUR!Shakib Al Hasan starts his second over. Rohit Sharma welcomes him with back-toback boundaries. First towards backward point and then square of the wicket.

20:01 IST: Captain Virat Kohli is the new man at the crease. Did you hear the noise? Kohli..Kohli..Kohli..Yes, it is for the Indian captain.

19:58 IST: WICKET! Mortaza gets the breakthrough, ends Dhawan's stay at 46 runs. The left-hander falls 4 runs short of his fifty. Easy catch for Mosaddek Hossain at first slip. India 87/1 in 14.4 overs.

19:52 IST: Another bowling change for Bangladesh. Shakib Al Hasan comes into the attack.

19:49 IST: Most runs in a single edition of Champions Trophy:

19:38 IST: Most runs for India in Champions Trophy:

19:26 IST: SIX! First maximum of the Indian innings. Dhawan goes on backfoot and pulls this towards deep square leg. Excellent placement from him. India 56/0 in 8 overs.

19:24 IST: FOUR! Both the openers are dealing in boundaries now. Dhawan goes on backfoot and slashes the ball towards backward point.

19:06 IST: FOUR! What a shot from Rohit. The right-hander bends his knees and drives the ball through square of the wicket. Beautiful shot. India 21/0 in 3.5 overs.

19:05 IST: FOUR! Rohit Sharma uses the pace and guides Mustafizur towards square of the wicket. India 17/0 in 3.2 overs.

19:03 IST: Another brilliant over from skipper Mashrafe Mortaza. He concedes just 2 runs. India 13/0 in 3 overs.

18:57 IST: FOUR! Another one from Dhawan. He is in form. He sends Mustafizur towards square of the wicket for another boundary. India 10/0 in 1.4 overs.

18:48 IST: Hello friends, welcome to the chase. India need 264 to win to set up summit clash with Pakistan on Sunday.

18:10 IST: Four!Full toss from Bhuvneshwar, Taskin swings hard and edges the ball for a boundary.

18:03 IST: Four!!Yorker from Bumrah and Mashrafe edges the ball for a boundary.

18:00 IST: Four!Short from Bhuvneshwar, Mashrafe swings hard and top edges the ball for a boundary over the wicket keeper's head.

17:56 IST: Cleaned up!!Beautiful yorker from Bumrah, Mahmudullah misses and the stumps are all over the place.

17:51 IST: Four!Short from Bhuvneshwar, Mashrafe slams the ball for a boundary.

17:40 IST: Four!Full from Bumrah and Mosaddek drives the ball for a boundary.

17:38 IST: Jasprit Bumrah comes back for his second spell.

17:36 IST:Dhoni attempting a run-out, throws the ball onto his gloves and Bangladesh get five penalty runs. The rule is that if a ball hits an external equipment on the field the batting team gets an addition of five penalty runs.

17:29 IST: Dropped!!Short from Pandya, Mahmudullah tries to cut but gets a top edge, Ashwin at third man puts it down. And what's worse, the ball has gone for a boundary.

17:25 IST:Rarely will you find no traffic on Delhi roads but this can only happen when Indian cricket team is playing.

Peak hour, Delhi road and you get to drive alone on the road,no traffic.
Happens only when VVIP movement or during an India match. #INDvBAN pic.twitter.com/MBbqlTUdMx

17:23 IST: Four!!Hossain cuts Jadeja hard for a boundary on the last ball of the 37th over.

17:21 IST: Four!!Mossadek Hossain gets off the mark with a boundary on the off-side.

17:12 IST:Good over from Jadhav, concedes only two runs.

17:08 IST: Four!Short from Jadeja and Shakib smashes the ball for a boundary on the off-side.

17:02 IST: After 30 overs, Bangladesh are 161 for three. Mushfiqur Rahim and Shakib Al Hasan are out in the middle for Bangladesh.

16:42 IST: Tamim Iqbal and Mushfiqur Rahim bring up their 100-run partnership in the 24th over.

16:37 IST: Four!Brilliant batting from Tamim as he hits Ashwin for three consecutive boundaries.

16:32 IST: Safe!Mushfiqur drags his foot back in time as Dhoni takes the bails off. A close shave for the Bangladeshi.

16:23 IST:Hardik Pandya has been costly, conceded 28 runs in three overs.

16:18 IST: SIX!!Tamim comes down the track and flicks Pandya for the first maximum of the match.

16:06 IST:Good over for Bangladesh as they score 13 runs off Pandya over.

16:05 IST: Four!Tamim hits Pandya straight down the ground for a boundary.

16:04 IST: SAFE!!Tamim drags the ball onto the stumps but the umpire adjudges it a no-ball as Pandya over steps. Tamim survives.

15:59 IST:Good over from Ashwin, concedes only two runs.

15:51 IST: Ten overs done. Bangladesh are 46 for two.Mushfiqur Rahim and Tamim Iqbal are out in the middle.

15:48 IST: Four!!Two consecutive boundaries from Mushfiqur off Bhuvneshwar. Good over for the Bangla Tigers.

15:47 IST: Four!!Mushfiqur Rahim gets an inside edge and the ball runs away for a boundary.

15:44 IST:Another good over from Bumrah, concedes only a run.Bangladesh are 32 for two after eight overs.

15:38 IST: OUT!!!A little wide from Bhuvneshwar and Sabbir hits it straight to Jadeja at point. Bangladesh are 31 for two after 6.5 overs.

15:35 IST:A maiden over from Jasprit Bumrah.

15:29 IST: Four!Bangladesh are off to a flier. This time Iqbal edges a ball for a boundary.

15:27 IST: Four!!Coming down the track, Sabbir smacks Bumrah over the in-field for a boundary.

15:23 IST: Four!Sabbir smacks Bhuvneshwar through the off-side for the second boundary of the over.

15:22 IST: Four!Coming down the track, Sabbir whacks Bhuvneshwar for a boundary.

15:19 IST:Good second over for Bangladesh as they score 10 runs.

15:17 IST: Four!!Sabbir Rahman gets off the mark with a boundary on the off-side.

15:16 IST: Four!Tamim Iqbal welcomes Jasprit Bumrah with a boundary down the leg side.

15:15 IST: Brilliant first over from Bhuvneshwar Kumar, concedes a run and takes a wicket.

15:14 IST: Bowled!!Wide from Bhuvneshwar Kumar, Soumya trying to drive, drags the ball back to the stumps.

Not the start Bangladesh wanted or needed - Soumya Sarkar chopped on for a duck! #BANvIND #CT17

15:10 IST:Bhuvneshwar Kumar to start the proceedings for India.

15:09 IST:Tamim Iqbal and Soumya Sarkar opening the batting for Bangladesh.

15:03 IST:Players are on the field. National anthem for the both countries being played.

15:00 IST:The rain has stopped but there is a ten minute delay.

14:56 IST: Good news for the fans.The covers are coming off.

14:40 IST:No changes to the Indian team that outclassed South Africa.

14:28 IST:The weather seems to have taken a turn for the worse at Edgbaston. Suddenly it's cloudy and windy. Let's just hope rain doesn't play spoilsport in this match.

14:27 IST:The Indian stars will be raring to go but one man will especially be up for it. Yuvraj Singh will be playing his 300th ODI today.

14:20 IST: Hello and welcome to the live blog of the second semi-final between India and Bangladesh. The Men in Blue are favourites to win this match but the Bangla Tigers always seem to up the ante when they play India. A win for India will set up a mouthwatering final against Pakistan but let's not fast forward to the future just yet.

But therein lies the real problem. India have come good in two one-sided matches, against Pakistan and South Africa, but the only time they were challenged, by Sri Lanka, they fell to a big loss.

So if Bangladesh can provide a challenge, which is never out of the equation, it will be interesting to see how India reacts.

Kohli had said after the Sri Lanka match that he had read the riot act to the team and it worked like magic against South Africa. Hopefully the words are still fresh enough.

As for Bangladesh, they can play with abandon, since no one expects them to win. But in that, they may find a formula to advance - the philosophy to nothing to lose and everything to gain.