India beat Bangladesh by nine wickets to set up a mouthwatering ICC Champions Trophy 2017 final against Pakistan, to be held on Sunday. 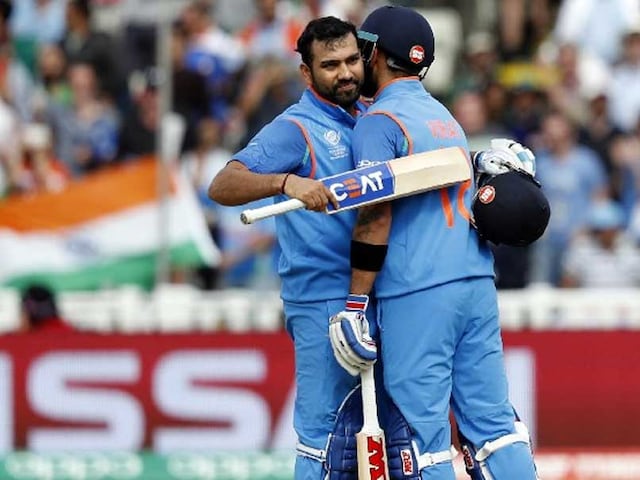 A batting masterclass from Rohit Sharma (123 not out) and Virat Kohli (96 not out) helped India outclass Bangladesh by nine wickets in the semi-final of the ICC Champions Trophy 2017 at Edgbaston, Birmingham on Thursday. The Men in Blue will now face arch-rivals Pakistan in the final on Sunday. The defending champions, set a target of 265 to win by Bangladesh, chased down the target in 40.1 overs as Bangladesh bowlers were completely outgunned by the all-star Indian batting line-up.

With a fighting total on board, Bangladeshi fans would have dreamed of overcoming India and reaching their first major ICC tournament final. However, it didn't take much time for Rohit and Shikhar Dhawan to shatter those dreams and put India in charge of the tie. The right-handed opener smashed his 11th ODI century as India coasted in the chase.

Rohit and Shikhar Dhawan, who became India's highest run-getter in ICC Champions Trophy, gave India a flying start in what in the beginning seemed to be a tricky run chase.

The duo added 87 runs for the opening wicket in 14.4 overs to put India in the driver's seat in the chase.

Dhawan was the aggressor early on as he carted the Bangladeshi pacers to all parts of the ground. Rohit too soon hit his stride as the Bangladesh bowlers found it next to impossible to get a breakthrough.

Rohit's innings was a stark contrast to the brutal power-knock of Dhawan. The right-hander showed elegance as he played the ball late but still managed to find the boundary on regular basis.

Bangladeshi pacers tried to bounce him out but that ploy too failed as Rohit was more than adept at handling anything short. Barring an outside edge that ran away to the third man boundary, Rohit didn't give Bangladesh even a sniff.

He soon reached his 32nd fifty but lost opening partner Dhawan before reaching the milestone. Joined by captain Virat Kohli, Rohit's innings blossomed and he reached the three-figure mark without much fuss.

Kohli, after a circumspect start, took charge of India's chase as he took a liking to the Bangladeshi bowlers.

The Indian captain was in fine touch as he brought about his 42nd ODI half-century. He then flexed his muscles as India sped towards the target. In the end, he was four runs short of another well-deserved century but would be content with the brilliant batting and bowling performance.

Earlier, Kedar Jadhav proved to be India's surprise weapon with the ball as the title-holders restricted Bangladesh to 264 for seven.

Bangladesh's third-wicket duo shared a stand of 123 but, ideally, the Tigers would have wanted at least one of them to go on to a bigger score.

It appeared a minor success for Bangladesh when Jadhav came on in a match where frontline off-spinner Ravichandran Ashwin's first seven overs cost 42 runs.