In a comical series of events during Day 2, Virat Kohli decided to go for a review despite Rishabh Pant trying his best to stop him from doing so. 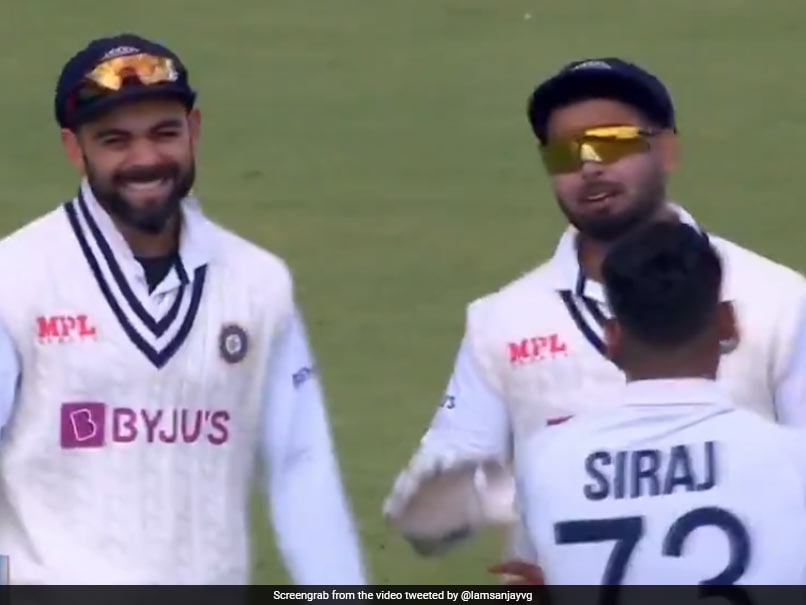 Virat Kohli decided to take DRS despite Rishabh Pant pleading with him not to.© Twitter

India made a fine start to the second Test at Lord's with openers Rohit Sharma and KL Rahul putting the team in a strong position on Day 1. However, India failed to cash in on their advantage on Day 2, pegged back England's premier pacer James Anderson. Indian bowlers led by Mohammed Siraj started well as England lost two early wickets but Joe Root and Rory Burns steadied the ship somewhat to keep the hosts in the hunt. And while Siraj has proved to be more than handful with the ball, his decision-making skills when it comes to taking DRS has been quite dire. On Day 2, Virat Kohli too seemed to be swayed by Siraj's enthusiasm and optimism, deciding to go for the review but getting nothing in return.

The second time Kohli decided to take the DRS, wicketkeeper Rishabh Pant pleaded with him not to. But Kohli, who couldn't laughing, still decided to go ahead. The entire scene made for some hilarious viewing with the video being shared numerous times on social media.

In the 23rd over, Siraj rapped England captain Joe Root on the pads. There was a loud LBW appeal from the Indian players but the umpire turned it down. A review already burned just a couple of overs back, Siraj with a sheepish grin on his face, looked to Kohli.

The Indian captain burst into laughter and looked at Pant, who was quick to tell him that not to take DRS. Not heeding the advise of his wicketkeeper, Kohli continued to see the funny side of things, and even signalled for the review.

The series of events led to a meme fest on Twitter.

Kohli , Siraj and pant discussing whether to take review or not. #IndvsEngpic.twitter.com/mvdf2YyGPK

Pant Stopping kohli whenever there is lbw appeal from siraj #IndvsEng pic.twitter.com/7m1VZGjqXy

While India failed to get rid of Root, who remained unbeaten on 48 at Stumps on Day 2, Mohammed Shami struck for India towards the end of the day's play, removing opener Rory Burns for 49.

Rishabh Pant Mohammed Siraj England vs India, 2nd Test England vs India, 2021 Cricket
Get the latest updates on IPL Auction 2023 and check out  IPL 2023 and Live Cricket Score. Like us on Facebook or follow us on Twitter for more sports updates. You can also download the NDTV Cricket app for Android or iOS.