Highlights India vs England, Lord's Test: England routed India by an innings and 159 runs at the home of cricket to take a 2-0 lead in the 5-match Test series. 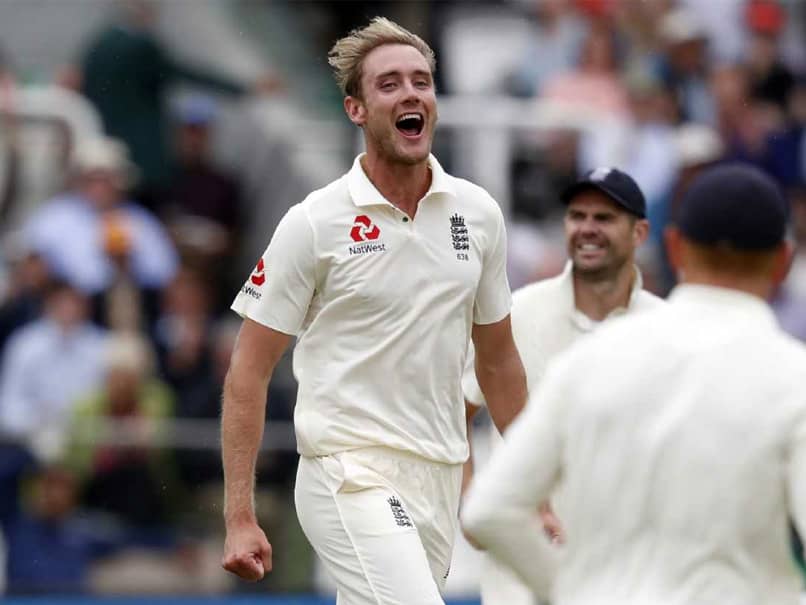 Pacers James Anderson and Stuart Broad wreaked havoc as clinical England romped India by an inning and 159 runs on Day 4 at Lord's to take a 2-0 lead in the 5-match Test series.  Anderson (4-23) along with Stuart Broad (4-44) bowled brilliantly, bundling India out for 130 in the second innings. India were trailing by 250 runs when they started their second innings after England declared on 396 for 7 earlier in the day. James Anderson repeated his first inning act, dismissing both Indian openers right at the start. India went into lunch with 17 for 2 on the board. In the second session, Ajinkya Rahane and Cheteshwar Pujara tried to steady the Indian ship but Stuart Broad bowled a terrific spell tearing apart the Indian middle-order. After claiming wicket of Rahane and Pujara, Broad clinched crucial wicket of Virat Kohli to write off India's chances of even a draw. Dinesh Karthik was dismissed for a first ball duck. The lower order showed some resilience but eventually was wrapped up by Anderson and Chris Woakes. (SCORECARD)

22:15 IST: Thank you for joining us on our live coverage of the second Test between England and India.

India are dismissed for just 130 in their second innings - England win by an innings and 159 runs!#ENGvIND scorecard https://t.co/e1I98c7CZY pic.twitter.com/skFuGxAgXe

22:12 IST: OUT! Done and dusted for India. Final wicket falls and England have won the second Test.

21:59 IST: OUT! Shami tries to his Anderson out of the park, misses and is caught in front of the stumps. Fourth wicket for James Anderson in the second innings. England just 1 wicket away from win.

21:52 IST: Review from Shami. Original decision is out. Decision reversed. Replay shows that there was no gloves involved. Shami survives. IND 121-8 after 44 overs.

21:49 IST: OUT! Inside edge and Kuldeep drags the ball back on to the stumps. Anderson gets his third wicket in the second innings. England are just 2 wickets away from win. IND 121-8 after 43.4 overs.

21:40 IST: OUT! Review from England. Original decision is not out. Decision is reversed. Hardik Pandya was in front of the stumps. He walks back after scoring 26 runs. Chris Woakes gets is first wicket in the second innings. England are just 3 wickets away from win. IND 116-7 after 42.1 overs.

21:37 IST: England pacers are looking to wrap-up Indian innings but Pandya and Ashwin are showing resilience. Another Anderson over comes to an end. IND 116-6 after 42 overs.

21:24 IST: FOUR and it's 50-run partnership between Ashwin and Pandya. Broad drifts on to the pads and Pandya whips it through mid-wicket for a boundary. IND 112-6 after 40.3 overs.

21:01 IST: Now, Ashwin takes a hit. England bowlers are bowling terrifically at the moment. Ashwin is fine but India dealing with worse issues at the moment. IND 73-6 after 34 overs.

20:53 IST: Hardik Pandya has taken a hit on his thumb. Some blood spotted, team doctor and physio have been called on the field.

20:50 IST: Play resumes after Tea. Stuart Broad will bowl the first over of the final session.

@root66 leads @englandcricket out of the Pavilion after Tea.

Will they be able to seal victory tonight?

As a consequence, an early Tea has been taken. The restart will be 4.20pm should no further rain fall. #ENGvIND#LoveLords

20:11 IST: OUT! First ball duck for Dinesh Karthik. Caught in front of the stumps. Even review could not save him. Broad takes his fourth wicket. He is on a hat-trick now. IND 61-6 after 30.4 overs.

20:07 IST: OUT! Review from Virat this time! Original decision is out. England catch the big fish. Virat Kohli departs after scoring 17 runs. Replay shows that there was clear glove involved. Broad is on fire.

That's the big one! Virat Kohli gloves one from Stuart Broad to Ollie Pope at short leg and India are in trouble on 61/5 - they still trail by 228 runs.#ENGvIND LIVE https://t.co/e1I98c7CZY pic.twitter.com/eTOAKqIbmR

20:05 IST: Review from England. Original decision is not out. Replay confirms that the ball touched the shirt of the Indian skipper and not the gloves. Kohli survives. IND 61-4 after 30.2 overs.

19:57 IST: Another tight over from Broad comes to an end. Hardik Pandya trying to occupy the crease but is looking uncomfortable against Broad. He is still to open his account and has played 10 balls so far. IND 54-4 after 29 overs.

19:40 IST: 50 up for India! It has been a struggle for the Indian batsmen in the second innings but Kohli (6) and Pujara (17) are fighting it out for the team at the centre.

19:36 IST: Maiden! A really testing over from Stuart Broad comes to an end. Pujara played the last six deliveries in awkward ways but has managed to survive. IND 48-3 after 25 overs.

19:26 IST: FOUR! Gorgeous cover drive from Virat Kohli. The ball was full and wide from Stuart Broad and Kohli pounced on to it in style. IND 47-3 after 22.3 overs.

19:21 IST: Bowling change for England. Sam Curran introduced in to the attack. Three slips for him.

19:20 IST: Cheteshwar Pujara pretty watchful at the moment. He has played 67 deliveries for his 12 runs. He his playing very patiently, leaving all the balls out-side his off stump. Maiden over from Broad comes to an end. IND 38-3 after 21 overs.

19:10 IST: Virat Kohli comes out to bat at number 5. He looks uncomfortable at the moment. Stretching his back at the centre.

@imVkohli comes to the crease with India 35/3 - can he save their innings?#ENGvIND LIVE https://t.co/e1I98c7CZY pic.twitter.com/Gh6l7HBAoB

19:09 IST: OUT! Stuart Broad strikes and Rahane departs after scoring 13 runs. Edges the ball and Keaton Jennings at third slip takes an easy catch. IND 35-3 after 19 overs. Still trail by 254 runs in the second innings.

19:06 IST: It's getting a bit colder out there in the middle. Umpire Aleem Dar, during the drinks break gets an extra jumper for himself.

18:54 IST: Cheteshwar Pujara is looking solid at the moment. He has scored 8 runs from 49 deliveries. Leaving all the balls outside his off-stump. Clips the last one on the leg side for a single. IND 26-2 after 15.2 overs.

18:35 IST: Anderson operating with four slips at the moment against Pujara and he is leaving the balls outside off-stump with ease. IND 18-2 after 10.3 overs.

18:28 IST: Cheteshwar Pujara and Ajinkya Rahane are back at the centre to start the post-lunch session. Chris Woakes will start the proceedings for England.

@englandcricket emerge from the Pavilion with the rain now passed!

Play will be restarting shortly.

17:45 IST: Rain continues to irritate. Match has been further delayed after Lunch.

The covers are still on the pitch at the moment, with rain continuing to fall.

Lunch Day 4: India 17 for the loss of 2 wickets. Trail England by 272 runs in the second innings

16:57 IST: Rahane living dangerously at the moment. Huge appeal from Anderson but umpire Aleem Dar turns it down.

16:47 IST: Ajinkya Rahane comes out to bat in place of Virat Kohli at number four spot as the skipper did not took the field at the start of day four. Virat had to wait for 40 minutes and the stipulated time was not completed.

16:45 IST: OUT! James Anderson strike again. This time it's KL Rahul, who is trapped in front of the stumps. Second wicket for Anderson in the second innings. IND 14-2 after 5.1 overs.

16:31 IST: FOUR! KL Rahul leans into the drive and first runs on the board for India. That was wide from Broad and Rahul wasted no time on that one. IND 4-1 after 3.1 overs

16:24 IST: OUT! Inside edge and Anderson draws the first blood. Simple catch for wicket-keeper Jonny Bairstow. The ball deviated sharply off the deck, taking Vijay's edge on the way throught to the keepe. Vijay departs on a pair. IND 0-1 after 2.2 overs

16:19 IST: Murali Vijay survives the first over from James Anderson. IND 0-0 after 1 over.

16:16 IST: Openers Murali Vijay and KL Rahul are out at the centre for India in the second innings. James Anderson will start with the new ball for England

Here comes the declaration from England. They lead by 289 runs and Woakes remains unbeaten on 137*.

India innings coming up in a bit.

16:05 IST: Pheew! 17 runs from the last over. Both England batsmen looking aggressive now. Shami had no place to hide.

15:54 IST: Beaten! Shami is bowling superbly at the moment. Eighth time, since the morning, he has gone past the outside edge but just not finding the edge. Eng 376 for 6 after 85.5 overs.

15:47 IST: FOUR and that's fifty runs partnership between Woakes and Curran. Woakes cuts Ishant's delivery and Kuldeep is not able to pull the ball inside in time. Eng 369 for 6 after 84.3 overs.

15:41 IST: Beaten! Shami beats Sam Curran on the second ball. The ball is seaming just a little bit at the moment but there is no help in the air for the Indian pacers. Eng 363 for 6 after 83.2 overs.

15:36 IST: 5 runs from first over of the day from Mohammed Shami. Ishant Sharma will share the new ball from the other end. Virat Kohli is operating with just three slips at the moment. Eng 362 for 6 after 82 overs.

15:34 IST: First runs from the bat. Sam Curran tucks the ball to square leg for a single.

15:30 IST: FOUR! Poor start from Mohammed Shami. Too wide from the stumps. Even Dinesh Karthik had no chance. Four byes for England to start the scoring. Eng 361 for 6 after 81 overs.

15:28 IST: Chris Woakes (120) and Sam Curran (22) are at the centre to start the fourth day for England. Mohammed Shami will start the proceedings for India.

Day 4 is underway - and we are batting on.

15:00 IST: So, 30 minutes to go for the start of play and final preparations are being made.

What do you make of @josbuttler's off-spin action!?

Some more names got written into the history books so far this Test.

14:20 IST: UPDATE: There's a slight drizzle at the moment. The pitch is under cover.

Hello and welcome to Day 4 of the 2nd Test.

There's a slight drizzle on at the moment and the pitch is under cover.#ENGvIND pic.twitter.com/P4SePJhyp6

14:10 IST: Hello and welcome to the Live coverage from Day 4 of the second Test at Lord's.

Beginning the day, Cook and Jennings made a positive start, showing a lot of intent. But a full-pitched delivery missed Jennings' bat and hit his pads, resulting in a LBW decision, with the hosts at 28. Cook fell soon, as an away-moving delivery from Ishant found an edge and the ball landed in the hands of wicket-keeper Dinesh Karthik.

As soon as 20-year-old Pope joined Root in the middle, India captain Virat Kohli decided to bring in chinaman spinner Kuldeep Yadav to operate from one end. Pope showed a lot of promise, dealing confidently with Ishant, Shami and Kuldeep.

The partnership between Pope and Root had reached 45 runs when a delivery from Pandya dismissed the former. Pope missed the line and was plumb in front of the wicket, with England at 77/3. Play fantasy league and win cash daily

Joe Root England vs India, 2018 Live Score Live Cricket Score Live Blogs Cricket
Get the latest updates on IPL 2021, IPL Points Table , IPL Schedule 2021 , live score . Like us on Facebook or follow us on Twitter for more sports updates. You can also download the NDTV Cricket app for Android or iOS.