Virat Kohli has been nothing short of brilliant in the ongoing first Test between India and England in Edgbaston. 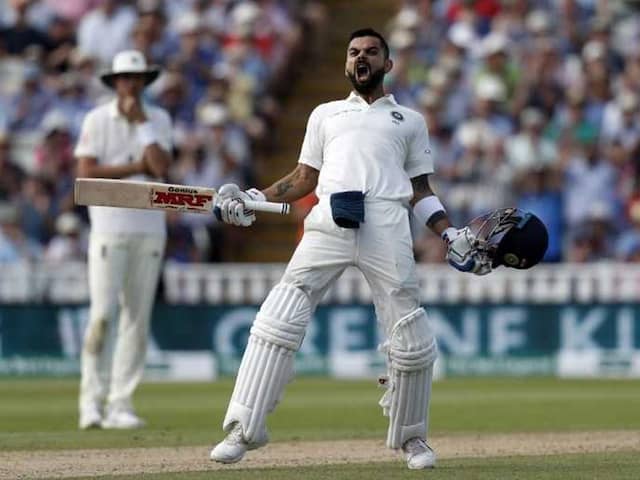 Virat Kohli has waged a lone battle for India against the English bowlers in the opening Test.© AFP

Virat Kohli is waging a lone battle in the ongoing 1st Test between India and England at Edgbaston, Birmingham. The Indian skipper has been nothing short of brilliant in the opening Test, scoring a magnificent century in the first innings, followed by an unbeaten 43 in the second that has kept India in the hunt for a memorable win. The Indian run-machine received a lot of accolades after his superlative 149, his maiden Test hundred in England, that meant India were only 13 runs behind on first innings when it looked as if they might be at least a hundred runs in arrears.

The likes of former Pakistan pacer Shoaib Akhtar and former England star Kevin Pietersen lavished praise on Kohli and now another cricketing great, former Australia captain, Steve Waugh has dubbed the India captain "a global superstar" and backed him to "break all records in world cricket".

This guy is a global superstar. Will break all records in world cricket. @virat.kohli #india #ultimatecompetitor #passion

The Edgbaston Test hangs in the balance as Kohli stood in defiant at stumps on Day 3. Going into the fourth day, India are 110 for five, needing another 84 runs to take a 1-0 lead in the five-match Test series.

India fast bowler Ishant Sharma was the star of the show on Day 3 for India, taking an an impressive five for 31 as England's second innings folded at 180.

England's 1,000th Test featured an all-too familiar batting collapse as they slumped to 87 for seven on Friday, with Ishant taking three wickets in an over.

But they avoided a humiliating loss thanks to No.8 Sam Curran's rapid 63, his maiden Test fifty.

On Day 4, India will be hoping Kohli can produce another heroic performance with the support of others around him and pull off their highest fourth innings chase in England.

Virat Kohli Sam Curran Steve Waugh Edgbaston, Birmingham England vs India, 2018 England vs India, 1st Test Cricket
Get the latest Cricket news, check out the India cricket schedule, Cricket live score . Like us on Facebook or follow us on Twitter for more sports updates. You can also download the NDTV Cricket app for Android or iOS.