Arjun Tendulkar was earlier seen bowling to Indian batsmen at the nets. 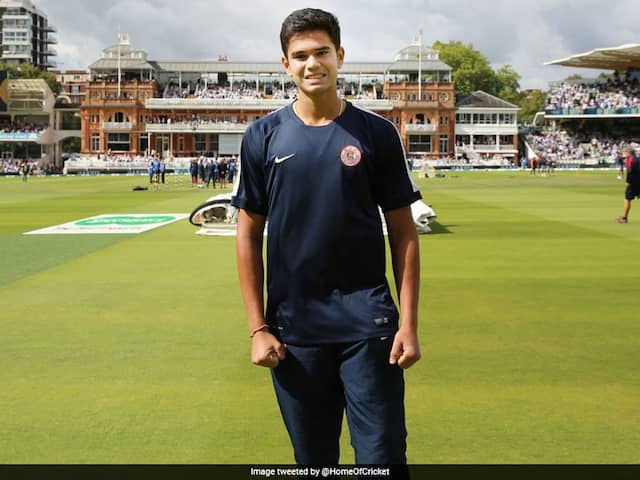 Arjun Tendulkar has been headlining the news for quite some time now with his inclusion at the U-19 Youth Test series in Sri Lanka that India went on to win 2-0. India won the second match by an innings and 147 runs. Arjun was back in focus, during India's second Test against England at Lord's, but this time for a different reason. Arjun, who is currently training with MCC Young Cricketers, helped the ground staff as rain poured down. The official Twitter handle of the Lord's Cricket Ground took to Twitter to post about Arjun's effort.

"Not only has he been training with @MCCYC4L recently & but he has also been lending a helping hand to our Groundstaff!" the tweet read.

Not only has he been training with @MCCYC4L recently & but he has also been lending a helping hand to our Groundstaff!#ENGvIND#LoveLords pic.twitter.com/PVo2iiLCcv

Ahead of the 2nd Test at Lord's, Arjun was spotted bowling to the Indian batsmen in the nets as Team India head coach Ravi Shastri watched on.

In a video uploaded on YouTube, India batsman Murali Vijay could be seen facing the young bowler, who spends most of his time at the Lord's Cricket Ground.

Ecstatic by his son's selection in India Under-19 team for the Youth Test, Sachin Tendulkar had said, "We are happy on Arjun being selected in India U-19 team. It is an important milestone in his cricketing life. (Wife) Anjali and I will always support Arjun in his choices and pray for his success."

Unlike his father, Arjun is a fast bowler and lower-order left-handed batsman.