R Sridhar said that both Wriddhiman Saha and Rishabh Pant are doing brilliantly and that it would be unfair to compare the two of them. 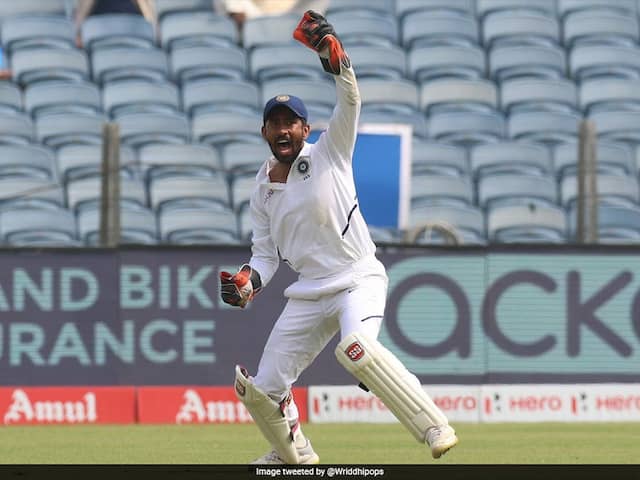 Wriddhiman Saha's return to international cricket and the dropping of Rishabh Pant sparked a debate on who should be India's first choice wicketkeeper. Rishabh Pant had impressed in India's tours of England and Australia, and became the first Indian wicketkeeper-batsman to score centuries in both the countries. But Saha, who was injured ahead of the England tour, was backed by the team management as the preferred man behind the stumps for the just-concluded three-match Test series against South Africa.

India's fielding coach R Sridhar feels that comparing the two is not fair as they both bring different qualities to the table. "It's unfair to compare the two as both Saha and Rishabh have their strengths. One is young, while the other is experienced," he told The Times of India.

"Rishabh is our future and Saha is our present and both are doing brilliantly," he said.

Saha was out of action for the Indian team for 22 months before being picked ahead of Rishabh Pant against South Africa. But Sridhar said there were no concerns that the Bengal keeper would be able to hit his peak despite being ruled out with injury for so long.

"No, there were no concerns at all. He was easing into the rigors of international cricket during the West Indies series. He had also played a few games for India 'A' before that," he said.

"Once we were playing in India, we brought back Saha. He is our best wicketkeeper and his skills were for all to see during the India-South Africa series," he said.

Ahead of the South Africa series, India skipper Virat Kohli hailed Saha as "the best keeper in the world".

Saha lived up to the billing and was excellent behind the stumps as India routed South Africa 3-0 in the Test series. His performance in the second Test in Pune stood out. Saha took two sensational catches - a one-handed stunner to get rid of Theunis de Bruyn and a superb effort while juggling the ball to dismiss South Africa captain Faf du Plessis - leading to more praise for the 35-year-old.

R Sridhar also praised the team's efforts in the field against South Africa, while earmarking all-rounder Ravindra Jadeja as the best Indian fielder in the last decade.

"I wouldn't like to go very far but in the last decade or so Jadeja has been the best fielder India has had," the fielding coach said.

India will next play the longest format of the game when they take on Bangladesh in a two-Test series, starting November 14.