India vs South Africa: Wriddhiman Saha said he and Rishabh Pant try to point out each other's mistake and that their rapport makes it easier to work together. 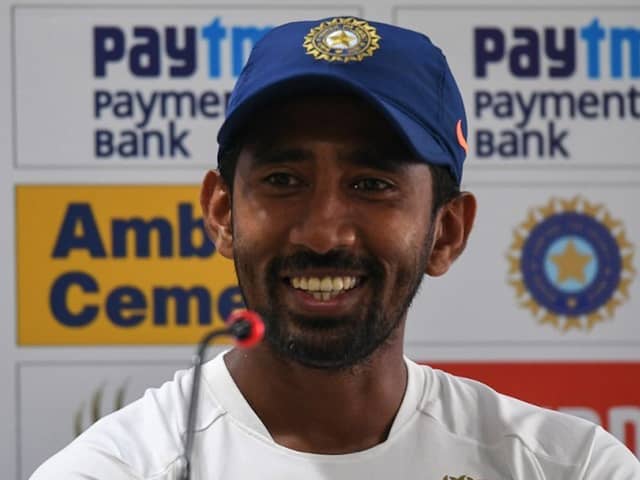 Wriddhiman Saha said he is hoping that India complete a 3-0 series whitewash against South Africa.© AFP

The cut-throat competition for a place in India's playing XI has not affected Wriddhiman Saha's relationship with his understudy Rishabh Pant as the duo try to help each other with notes on glovework. Saha was out of the Indian team for 20 months due to a shoulder surgery but his now back to his best as a keeper with some stunning catches in the recently concluded second Test against South Africa in Pune. Six days short of his 35th birthday, the sprightly Saha is often seen helping Pant with keeping drills after his own training, something that has been directed by the team managed.

Ask him if he is mentoring Pant and the ever-reticent Saha replied in the negative.

"There's nothing (mentoring) like that. We just discuss normally the way the wicketkeepers discuss. With Sridhar and Pant, we three jointly decide on how to go about our wicketkeeping on a particular type of wicket," he said.

The co-ordination and rapport between them helps make it easier for them to work together.

"We always observe each other's wicket-keeping. We work hard in our practice sessions and have a good understanding and co-ordination among ourselves. We always try to point out each other's mistakes. It's been going well so far," he said.

Saha, was in fact seen minutely observing Virat Kohli bat, standing behind the skipper at the nets.

"I was just trying to have a feel of the bounce off the wicket. So I stood behind Kohli. It definitely helps."

While his keeping has been rated as the best in world cricket, even BCCI president-elect Sourav Ganguly has spoken about the need to improve on his batting averages.

"Whoever plays in the team wants to contribute. As a wicketkeeper, I look to get some time in the middle and if I get time I try to build a partntership and score a fifty or so. Everyone tries like that. Sometime it works, sometime it does not," Saha said.

Saha pointed out that he has a century at the same venue in the only other Test JSCA International Stadium hosted -- a draw against Australia in March 2017.

Leading the series 2-0, Saha said, it's time to complete a whitewash against South Africa.

"I have good memory of the last match. I made 117 in the last match. I remember how I approached the innings. I also remember the Steve Smith incident. If you see we drew it last time. We are 2-0 up in the series so this time we will try to make it 3-0 this time," he concluded.

Wicketkeeping is a "thankless" job contrary to popular perception that anyone wearing a pair of gloves should catch every ball that comes his way, Saha said.

Wriddhiman, who has made a comeback to the Indian team after 20 months, was brilliant behind stumps in the Pune Test against South Africa, where he grabbed a couple of absolute stunners off Umesh Yadav' bowling.

This was apart from his sensational glovework while keeping up to slow bowlers Ravindra Jadeja and Ravichandran Ashwin.

"It's tough everywhere. Wicketkeeping is a thankless job and people think that he should take all the ball since he''s wearing a pair of gloves. It''s not easy like that, especially on a track with uneven bounce and turn. We prepare according to the wicket," he said.

He was asked about the acrobatic take down the leg-side off Umesh Yadav's bowling.

Before the South Africa series, Saha last figured in the Cape Town Test way back in January 2018 and got side-lined after a shoulder injury.

"I was out for a long time because of injury. I got a chance only after performing in the domestic and India A matches. I always continued the same preparation for batting and wicketkeeping and finally got and opportunity. I'm really happy to have contributed to the team," Saha, who made a comeback in the Syed Mushtaq Ali T20s earlier this year, said.