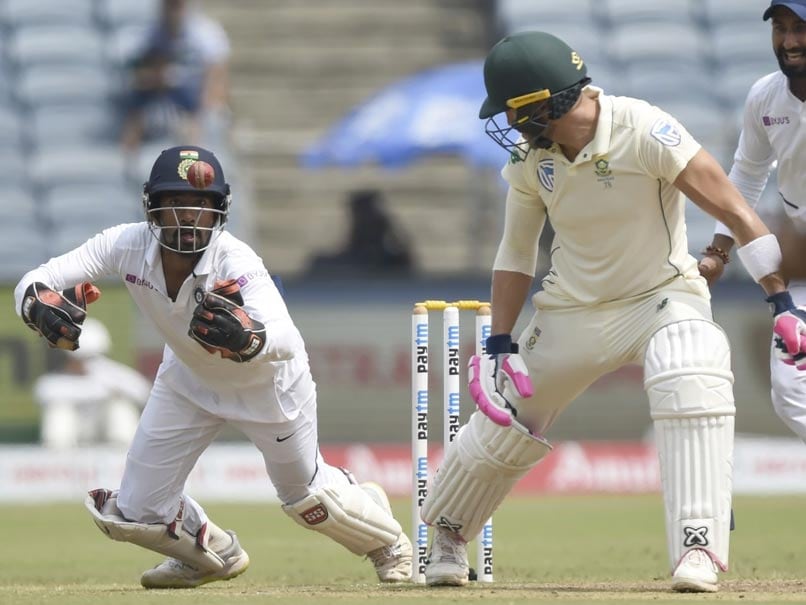 Wriddhiman Saha, after taking a one-handed stunner in the morning session, produced a juggling act to end Faf du Plessis' stubborn knock of five off 54 deliveries in Pune on Sunday. In the 24th over, Ravichandran Ashwin managed to find the inside edge of Du Plessis' bat and Wriddhiman Saha juggled the ball multiple times before diving forward to complete the catch. Soon after accounting for South Africa's captain, Ashwin foxed Dean Elgar into going for a big shot which went to Umesh Yadav at long-off.

Shreevats Goswami, former Royal Challengers Bangalore player, was full of praise for Saha for his outstanding work behind the stumps.

"No doubt that wriddhiman saha is the best keeper in the world right now ! Not saying this because he took those catches , The best regardless - period !," Goswami tweeted.

No doubt that wriddhiman saha is the best keeper in the world right now ! Not saying this because he took those catches , The best regardless - period !

A fan tweeted that Saha's glove work is good enough to keep Rishabh Pant out of the team.

"Lol Saha doing dramatic catches to keep Pant out of the team as long as possible," the tweet read.

In the match, South Africa finished the first session on Day four at 74 for four, trailing India by 252 runs.

Earlier in the day, Virat Kohli enforced the follow-on on South Africa and asked the visitors to bat again after bowling them out for 275 in the first innings.

Ishant Sharma struck in the first over to remove Aiden Markram for a duck as the South African opener bagged a pair in the match. Umesh Yadav soon got Theunis de Bruyn to nick one down the leg side as Wriddhiman Saha dived to his left to complete a stunning catch.

At the time of writing this, India were six wickets away from a historic win that will give them their 11th successive Test series win at home. Australia hold the current record with 10 series win in the longest format at home.

South Africa Cricket Team Cricket
Get the latest updates on IND vs NZ 2021, check out the Schedule and Live Score . Like us on Facebook or follow us on Twitter for more sports updates. You can also download the NDTV Cricket app for Android or iOS.