Harmanpreet Kaur blasted a six in the penultimate delivery to power India to a one-wicket win over South Africa in a last-ball thriller at the ICC Women's World Cup Qualifier Final. 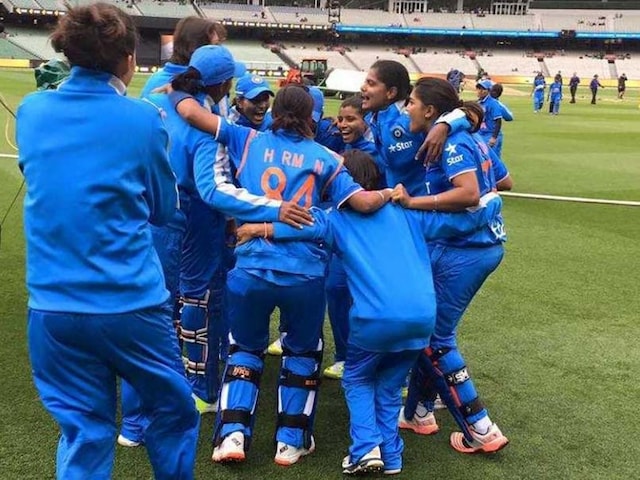 Colombo: Harmanpreet Kaur blasted a six in the penultimate delivery to power India to a one-wicket win over South Africa in a last-ball thriller at the ICC Women's World Cup Qualifier Final at P Sara Oval on Tuesday. Needing nine off six balls, Indian women were staring at defeat when they lost Poonam Yadav (7) in the first delivery but Harmanpreet plundered Letsoalo over deep midwicket to bring India back on the chase and sealed the win with a couple of runs in the last ball of the over.

Chasing 245 to win, Opener Mona Meshram (59) and Deepti Sharma (71) were the star players for India as they added 122-run innings for the first wicket to lay the foundation for the run chase.

M du Preez (40) was the top-scorer for South Africa women, while van Niekerk (37) and L Lee (37) got starts but failed to consolidate into big scores.

Already assured of a place in this year's Women's World Cup, India continued their invincible run at the tournament after overhauling the target in the last over.

In reply to South Africa's 244, India lost opener Thirush Kamini (10) early in the eighth over but Meshram and Sharma stitched a 122-run innings for the first wicket to help India recover.

But both the batswoman were sent back to the pavillion within a span of eight deliveries to deal a huge blow to the India's chase. It was MM Letsoalo (1/35) who dismissed Sharma in the 33rd over and then D van Niekerk sent Meshram packing in the next over as India slipped to 148-3.

Veda Krishnamurthy (31) and Harmanpreet (41) then tried to steady the innings before the former was removed by Marizanne Kapp in the 41st over.

New batswoman Shikha Pandey (12) and Harmanpreet brought up the 200 for India but Ayabonga Khaka was instrumental in two more wickets as Pandey and DP Vaidya (0) too were back into the hut three overs later.

While Pandey was run out, Khaka cleaned up Vaidya as India were reduced to 210 for six in 44 overs. Wicket-keeper Sushma Verma then lasted just two balls after being dismissed by S Ismail and Ekta Bisht too was cleaned up by Khaka as India further slumped to 223-8 in 45.4 overs. In the end, it was Harmanpreet's heroics that helped India seal the issue.

South Africa had defeated India in a practice match ahead of this tournament but the latter prevailed in their fixture in the tournament proper, winning by 49 runs in the Super Six stage.

Comments
Topics mentioned in this article
India Women Harmanpreet Kaur Mithali Raj P Sara Oval, Colombo Cricket
Get the latest updates on IPL 2020, check out the IPL Schedule for 2020 and Indian Premier League (IPL) Cricket live score . Like us on Facebook or follow us on Twitter for more sports updates. You can also download the NDTV Cricket app for Android or iOS.