All You Need To Know About Gautam Gambhir's Political Career, Poll Rivals

Gautam Gambhir: East Delhi, along with six other seats in the capital, will vote on May 12. The results will be declared on May 23. 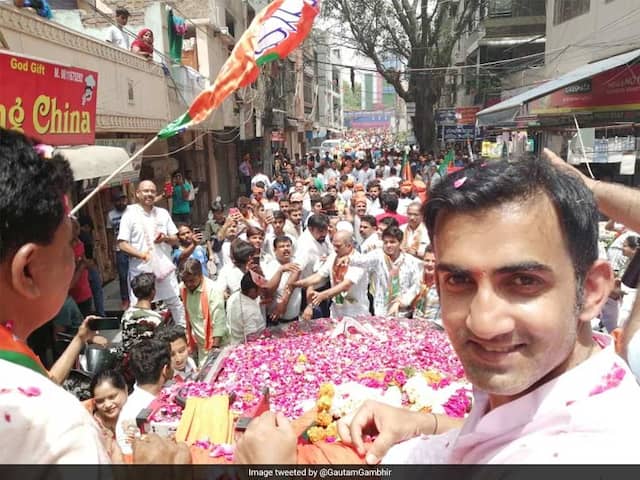 After he was "influenced" by Prime Minister Narendra Modi's vision for the country, former cricketer Gautam Gambhir joined the Bharatiya Janata Party (BJP) on March 22.  A month after he was welcomed to the party, the 37-year-old was chosen as the East Delhi candidate for the national election. "I want to do something different" for the people, he had said after filing his nomination papers. Since then, the ex-cricketer has been one of BJP's star campaigners both on the streets and on Twitter.

East Delhi constituency, among the largest constituencies in Delhi, will see a three-way contest between the BJP, the Congress and the Aam Aadmi Party (AAP). The BJP's Maheish Girri won the East Delhi seat in the 2014 general elections and the AAP candidate, Rajmohan Gandhi stood second. Hoping to retain the seat, the BJP replaced sitting Mr  Girri with Gautam Gambhir for the Lok Sabha polls in Delhi that will be held on May 12.

The East Delhi parliamentary constituency is one of the most thickly populated regions of the National Capital Territory and covers the Delhi neighborhoods such as Shahdara, Gandhi Nagar, Preet Vihar and Seelampur and is known to be among the least developed part of the capital.

Once a star opening batsman for the Indian cricket team, Gautam Gambhir is known to have been a supporter of the BJP government's policies. After his retirement in 2018, the former right-handed batsman formally joined the BJP in March this year, welcomed by Finance Minister Arun Jaitley. The party soon announced that he would be the party's East Delhi candidate for the Lok Sabha polls. Mr Gambhir is among Delhi's richest candidates with assets over Rs. 147 crore.

Candidates Up Against Gautam Gambhir

Soon after Gautam Gambhir's dive into politics, the BJP announced that he would replace East Delhi's sitting lawmaker Maheish Girri as the party's candidate, lining up a clash with the Congress's Arvinder Singh Lovely and the AAP's star candidate Atishi. Mr Gambhir, since his formal entry into the party, has held several roadshows and has pitched battles against his AAP rival. The two have traded claims about Mr Gambhi's voter ID with Atishi filing a complaint against Mr Gambhir over his possession of two voter IDs. The cricket-turned-politician had dismissed the claims, calling it "negative politics".

Atishi worked as Delhi Education Minister Manish Sisodia's adviser until a year ago, when she was asked to take charge of the East Delhi constituency. She was involved in drafting the manifesto of the AAP in the 2015 Delhi assembly election. She studied at the Oxford University and Delhi's St Stephens College.

Arvinder Singh Lovely was with the Congress for over three decades and contested four elections to the Delhi assembly and won all four of them. He was a minister in Sheila Dikshit's government. Mr Lovely switched sides to the BJP for a brief period before he rejoined Congress, claiming that he "felt like a misfit" in the BJP.

East Delhi, along with six other seats in the capital, will vote on May 12. The results will be declared on May 23.