India retain the Border-Gavaskar Trophy with a historic 2-1 series win. 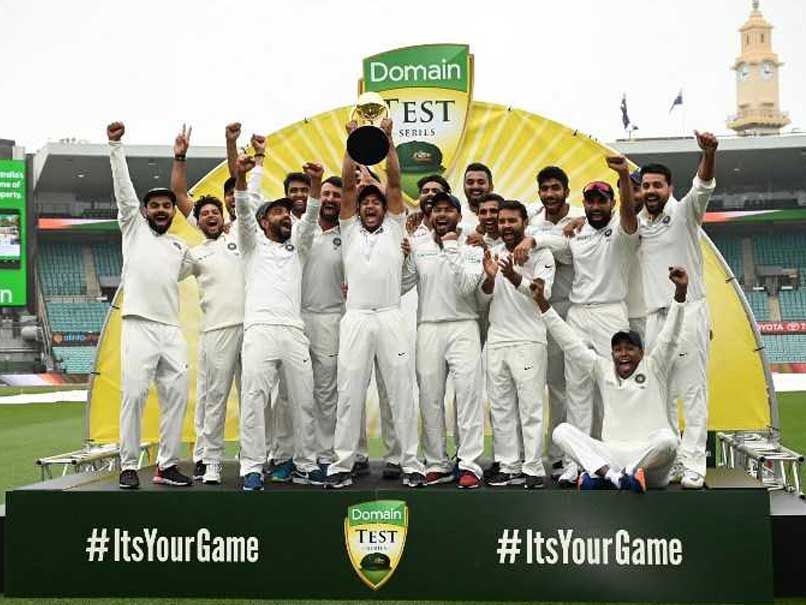 Virat Kohli became the first Indian as well as the first Asian captain to win a Test series in Australia.© Twitter

A dominant India won their first-ever Test series in Australia by a margin of 2-1 after play in the fourth and final Test in Sydney was abandoned due to rain on Monday. Australia were still trailing by 316 runs when the match was called off as a draw, ending India's 71-year wait after wins in Adelaide and Melbourne. It is the first time India managed the feat since they began touring Australia in 1947-48. Consequently, Virat Kohli became the first Indian as well as the first Asian captain to win a Test series in Australia.

India had ripped through the Australian tail in Sydney on a shortened Day Four, when bad light and rain allowed only around 100 minutes of play, bowling the hosts out for 300 in reply to their own ominous 622 for seven declared.

Australia then suffered the indignity of being forced to follow on at home for the first time in 30 years as Kohli twisted the knife.

Only four overs of their second innings were possible, with Marcus Harris not out two and Usman Khawaja unbeaten on four before the match was called off.

"I want to say I've never been more proud of being part of a team, than this one right here," said Kohli.

"The boys make the captain look good. By far, this is my biggest achievement. It's at the top of the pile."

"Have to tip our hat to India, we know how tough it is to win in Australia so congrats to Virat and (coach) Ravi (Shastri) because it's a huge achievement," he said.

"Disappointed, definitely over the last two Tests. We had our chances in Adelaide, in Perth I thought we played some good cricket, but in Melbourne and Sydney, we've been outplayed."

India got the series off to the best possible start by winning the tight opening Test in Adelaide by 31 runs on the fifth day - their first Test win in Australia for a decade.

The victory was built on Pujara's first innings 123 and his second innings 71, while wicketkeeper Rishabh Pant took a world record-equalling 11 catches.

Australia bounced back in Perth to level the series, winning by 146 runs.

It was a huge relief for the home side, having not won a Test since the ball-tampering "sandpapergate" scandal that rocked international cricket last March.

But another Pujara century in Melbourne set the visitors up for a big first innings total and when Australia capitulated in reply to 151 all out, the scene was set for India to take a stranglehold on the series coming into Sydney.

Aside from man-of-the-series Pujara, a big part of their their success in Australia has been executing their bowling plans to deprive the Australian batsmen of playing their shots.

"I thought those two tours were a great experience for us and that has helped us immensely to come and do well in Australia," he said.

"We said that to be successful in Australia, we need to make sure that we need to take the cut and the pull out of the Australian batsmen and then focus the attack on our strengths, so that's exactly what we did."

While virtually all of Australia's leading batsmen got starts, none converted them into a big innings, underscoring how much they miss the banned Steve Smith and David Warner.

Harris' 79 in Sydney was the highest any of their batsmen managed the entire series, making it the hosts' first four-Test home series without scoring a century in their history.

Sydney Cricket Ground (SCG), Sydney Australia vs India 2018/19 Cricket Australia vs India, 4th Test
Get the latest updates on SA vs IND 2021-22, check out the Schedule and Live Score . Like us on Facebook or follow us on Twitter for more sports updates. You can also download the NDTV Cricket app for Android or iOS.