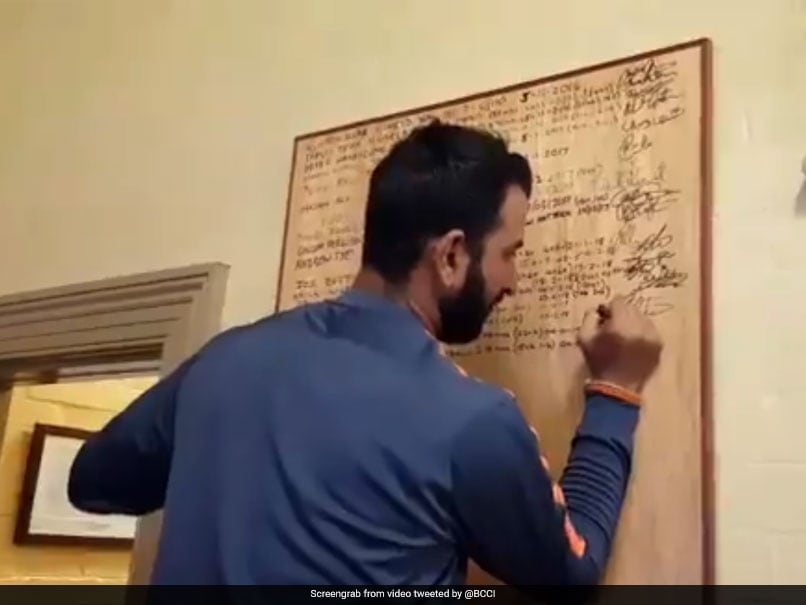 Cheteshwar Pujara scored 193 runs in the first innings of the Sydney Test.© Twitter

Cheteshwar Pujara and Rishabh Pant scored 193 and 159 not out respectively in the first innings of the fourth Test between India and Australia that is being played at the Sydney Cricket Ground (SCG). The SCG honours the player who scores a century or takes five wickets in a single innings or 10 across both innings in a Test match at the iconic cricket venue by adding his name to the Honours Board in the away dressing room. Pujara and Pant, who helped India post a mammoth total of 622/7 before Virat Kohli decided to declare the first innings were asked to sign in from of their names on the board after the play was abandoned due to rain on Saturday.

On the Board and with signatures - @cheteshwar1 & @RishabPant777 do the "Honours" at the SCG #TeamIndia #AUSvIND pic.twitter.com/QPBbuCCNxs

Pujara brought up his third century of the ongoing four-match series and 18th of his career on Thursday, while Pant became the first Indian wicket-keeper to get a Test hundred in Australia on Friday.

With 521 runs under his belt so far, Pujara is the highest-run scorer of the series, that the visitors lead 2-1.

The century in Sydney is also Pujara's fifth in Tests against Australia. This is also the first time Pujara has scored more than one century in an overseas Test series.

With this century, Pujara has surpassed former India batsman VVS Laxman, who has 17 Test centuries to his name.

As far as Pant is concerned, with the second Test century of his career, he became the only second visiting wicket-keeper to register Test centuries both in England and Australia. Jeffery Dujon, with hundreds in Manchester and Perth in 1984, was the first.

At the end of day three's play, Australia trail India by 386 runs. The hosts scored 236 runs and lost six wickets in the process.

Cheteshwar Pujara Rishabh Pant
Get the latest updates on ICC Women's Cricket World Cup 2022 and IPL 2022, check out the Schedule , Live Score and IPL Points Table. Like us on Facebook or follow us on Twitter for more sports updates. You can also download the NDTV Cricket app for Android or iOS.