India declared on a mammoth 622 for seven in their first innings on Day 2 of the Sydney Test. 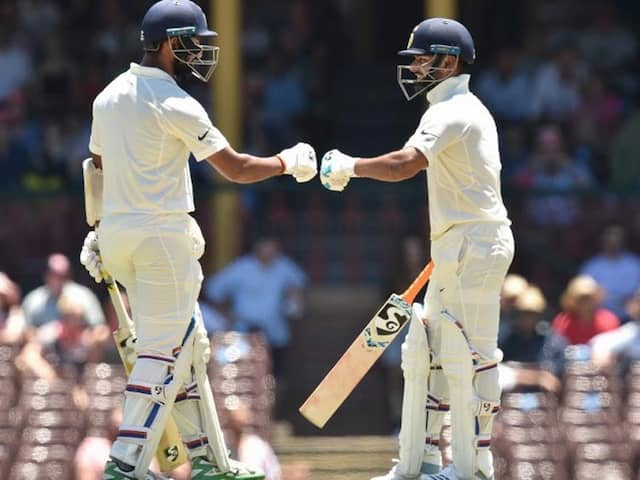 Cheteshwar Pujara and Rishabh Pant scored centuries as India took control on Day 2 of the fourth and final Test in Sydney on Friday. Riding on a mammoth 193-run knock from Pujara and a sparkling 159 not out from wicket-keeper batsman Rishabh Pant India declared their first innings on 622 for seven. The sublime knocks from both batsmen also helped the India team register their second highest team total on Australian soil -- highest team total for India, 705/7 declared, at the same venue, in 2004. At stumps, Australia were 24 without any loss with new opener Usman Khawaja (5) and Marcus Harris (19) successfully negotiating the tricky 10-over period for the home team.

Pujara, who missed out on a double hundred, produced another masterclass on the second day to guide India towards a towering total in the first innings. After Pujara's dismissal, Pant along with all-rounder Ravindra Jadeja (81) posted a record 204-run partnership for the seventh wicket at the Sydney Cricket Ground, guiding India to 622 for seven.

Nathan Lyon (4-178 off 57.2 overs) was the highest wicket-taker for the home team in the first innings.

India currently lead the series 2-1 after winning the opening clash in Adelaide and the third in Melbourne. Australia claimed victory in Perth.

Calm and collected number three Pujara started the day 130 not out and picked up where he left off.

He drove his second ball through the covers for three before once again dropping anchor, blocking and targeting only loose balls.

Throughout his knock, he hardly played a false stroke in a demonstration of "old-school" Test batting, soaking up the pressure and counter-attacking when he saw an opportunity.

Pujara brought up his 150 with a boundary and seemed destined for his fourth Test 200 before attempting to whip Lyon down the leg side. Instead, he lobbed the ball back into the spinner's hands.

He survived a review decision for caught behind on 12 and was dropped on 192 by Khawaja, but was otherwise faultless.
Sri Lankan batting legend Kumar Sangakkara summed it up in a tweet.

"A great lesson to all batsmen in the series and tests in general," he said. "@cheteshwar1 showing how trusting your strengths and being unashamedly dogged in technique and concentration brings great rewards."

At the other end chirpy wicketkeeper-batsman Pant plundered only his second Test century as he piled more pressure on a wilting Australian attack.

The 21-year-old left-hander, in only his ninth Test, smashed eight boundaries in his ton and quickly passed his previous Test high of 114, made at The Oval against England last year, swinging his bat as he grew in confidence.

He was ably supported by allrounder Jadeja who raced to a 10th Test 50, unleashing his trademark celebration of twirling his bat like a samurai sword.

So desperate were Australia at this point that Khawaja was given a bowl -- only the second time he has been called on in a Test.
Jadeja was finally undone by a weary Lyon who could barely muster a celebration as he knocked the stumps over and Kohli called it a day.

Earlier, Hanuma Vihari added only three to his overnight 39 before he misjudged a sweep off Lyon and the ball feathered his glove, with Marnus Labuschagne taking the catch.

From the moment the coin landed in Kohli's favour, the Test has taken on a predictable tone. Whichever team has won the toss in the series has batted first and gone on to win the match.

Sydney Cricket Ground (SCG), Sydney Australia vs India, 4th Test
Get the latest Cricket news, check out the India cricket schedule, Cricket live score . Like us on Facebook or follow us on Twitter for more sports updates. You can also download the NDTV Cricket app for Android or iOS.