India vs Australia: Top 5 Indian Batsmen To Watch Out For

While the focus seems to be exclusively on Virat Kohli, there are other batsmen who may do some serious damage to Australia. 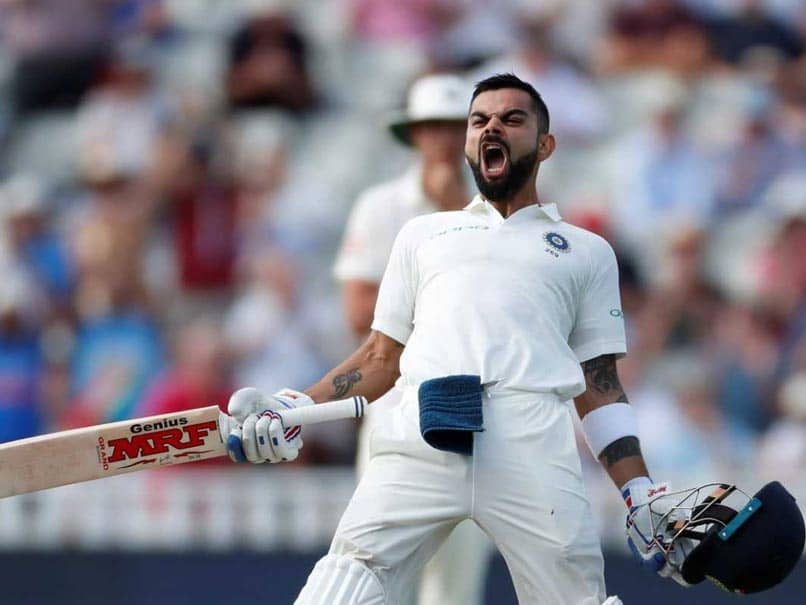 Virat Kohli will be key for India vs Australia in the four-match Test series.© Reuters

The India vs Australia Test series is only a few days away with Adelaide playing host to the opening Test starting Thursday. The series is being viewed as India's best chance to end their Test series jinx in Australia. The Indian cricket team has never won a Test series Down Under but with star batsmen Steve Smith and David Warner not being part of the Australian squad due to their roles in the ball-tampering scandal, the visitors for the first time are smelling blood. India are also being led by run-machine and arguably the best batsman of this generation, Virat Kohli. All eyes will also be on the others in the batting line-up as India begin their assault.

We look at the top five Indian batsmen who could make a big impact in Australia and lead the visitors to their first Test series triumph Down Under:

'King Kohli', the name he goes by nowadays, is the number 1-ranked Test batsman in the world and has been in top form this year in all formats. This year, Kohli has played a total of 10 Test matches so far, scoring 1,063 runs, including four centuries, at an average of 59.05. Out of the 10 Tests, eight were outside of India -- five in England and three in South Africa.

The other two Tests were held in India against the Windies with Kohli scoring a total of 184 runs at an average of 92.

Kohli also boasts of a brilliant Test record in Australia. In eight Tests played Down Under, he has amassed 992 runs at an average of 62 with a high score of 169 and five centuries to his name.

The last time Kohli visited Australia, he took the Aussie bowlers apart. In the 2014/15 Test series, Kohli scored 692 runs in the four-match series, scoring four centuries in the process at a staggering average of 86.50. 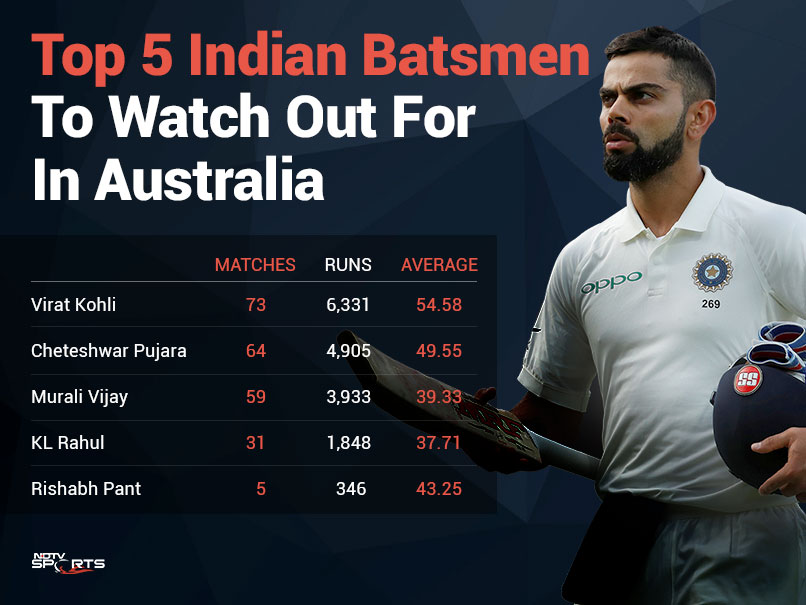 The stylish India opener has had a torrid time this year. He has played six Tests, scoring a total of 233 runs at a dismal average of 21.18 with just a solitary century to his name. In the recently concluded India-England series, Vijay scored 20, 6, 0 and 0 in the four innings of the first two games. Playing against the likes of James Anderson and Stuart Broad, the opener was seen struggling, which created pressure on the middle-order.

The poor run saw Vijay being dropped from the playing XI in the third Test and he was not even included in the 18-member squad for the final two Test matches of the series in England.

Vijay was also ignored for the two-Test series against the Windies in India but made his case for an opening slot in the Adelaide Test with a classy 132-ball 129, which included 16 boundaries and five sixes.

Like his opening partner, Rahul too has struggled in the longest format of the game this year. The 26-year-old has played 10 Tests this year, scoring a total of 420 runs at an average of 24.70 with just a single hundred. Consistency has been Rahul's biggest problem and the right-hander should count himself lucky that Prithvi Shaw is injured.

Rahul played all five Tests in England but managed to score only 299 runs at an average of 29.90. His saving grace for was a brilliant 149 in the final innings of the fifth and final Test at the Kennington Oval.

Rahul is yet to play a Test in Australia but impressed the four-day practice match against Cricket Australia XI with a half-century in the second innings.

As per his lofty standards, Pujara too has had an underwhelming year. The middle-order bat has scored 509 runs in 10 Tests this year at an average of 31.81 with one century to his name. The right-hander struggled big time in South Africa with a return of just 100 runs in the three Tests at an average of 16.66.

His poor performance against the Proteas saw him being dropped from the first Test against England at Edgbaston. But he returned for the next four Tests where he managed to score 278 runs at an average of 39.71.

Wriddhiman Saha's injury has seen Rishabh Pant take centre-stage for the wicket-keeping spot in the Indian team. But it has been his performances with the bat, in his brief period with the Indian Test team that has raised expectations among the fans.

Pant has played five Tests in total -- three in England and two against the Windies in India. He has scored 346 runs at an average of 43.25. The youngster already has a Test century to his name and that also in England.

The 21-year-old was prolific against the Windies as well, scoring 184 runs in the two-Test series at an average of 92.

Murali Vijay Rishabh Pant Australia vs India 2018/19 Cricket
Get the latest updates on India vs Australia Series, check out the India vs Australia Schedule for 2020-21 and Ind vs Aus live score . Like us on Facebook or follow us on Twitter for more sports updates. You can also download the NDTV Cricket app for Android or iOS.