MS Dhoni played a superb inning of 87 not out to anchor India's bilateral ODI series win in Australia. 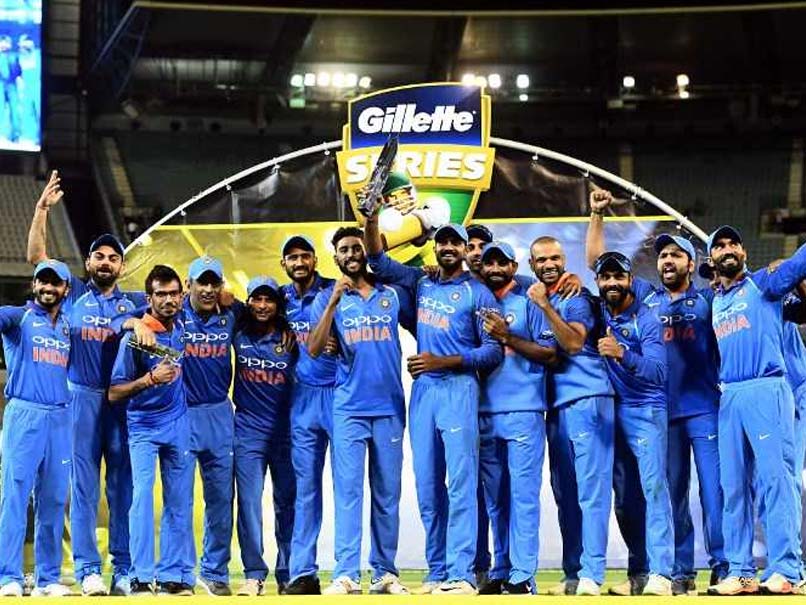 With the win at the MCG, India claimed the three-match series 2-1.© AFP

Mahendra Singh Dhoni produced a stellar knock to steer India to a seven-wicket win in the third and final One-day International (ODI) against Australia at the Melbourne Cricket Ground on Friday. Dhoni scored an unbeaten 87 off 114 balls to bring up his third consecutive half-century of the series. With the win at the MCG, India claimed the three-match series 2-1. India added the first bilateral ODI series win in Australia to their historic 2-1 Test series triumph after the hosts won the opening match in Sydney by 34 runs and Virat Kohli's team levelled with a six-wicket win in Adelaide.

The Indian skipper then stitched up a 54-run partnership with Dhoni to lay a solid foundation for India's run chase.

Jhye Richardson then got rid of Kohli (46) but Dhoni, the finisher, was still there to do what he does best.

Dhoni was well-supported by Kedar Jadhav who remained unbeaten on 61 off 57 balls as India chased down the target in 49.2 overs.

Earlier, Virat Kohli opted to bowl after winning the toss in the series-decider and India bundled out Australia for 230 runs in 48.4 overs.

Leg-spinner Yuzvendra Chahal recorded the best figures by any bowler in ODI cricket in Australia to restrict the hosts to a modest total of 230 in the series decider.

Chahal, playing his first match of the series, stunned Australia with his six for 42 to set India 231 to win the match and the series.

Chahal now shares the record with Ajit Agarkar, who claimed the same figures against Australia at the Melbourne Cricket Ground in 2004.

As far as Australia are concerned, it was an underwhelming batting performance.

Only Peter Handscomb showed some resilience with his 58 off 63 balls before he became one of Chahal's victims.

The home team managed just 17 boundaries before they were bowled out with eight balls to spare.

Australia's openers again failed to get a start and Alex Carey was out in the third over when he got a nick off Bhuvneshwar Kumar and was taken by Virat Kohli at second slip for five.

Shaun Marsh and Usman Khawaja steadied the innings before Adelaide centurion Marsh was smartly stumped by MS Dhoni off a wide down the leg-side from Chahal for 39.

Khawaja followed three balls later when he got a thick leading edge and offered Chahal a return catch for 34.

Marcus Stoinis lasted 20 balls before he became Chahal's third victim, caught at slip by Rohit Sharma for 10, leaving Australia rocking at 123 for five in the 30th over.

Glenn Maxwell hit a breezy 26 off 19 balls before Mohammed Shami enticed him to pull with a short-pitched delivery to Kumar sprinting in from the deep to take a diving catch.

Jhye Richardson played against the spin and chipped the ball to short midwicket where Kedar Jadhav took the chance for 16 giving Chahal his fourth wicket.

Handscomb was trapped plumb in front of his stumps by Chahal in the 46th over and Australia's innings rattled to a quick close.

Adam Zampa charged down the wicket to Chahal and holed out to Vijay Shankar at long-on for eight and Billy Stanlake was bowled by Shami for a duck.

Australia Cricket Team Australia vs India 2018/19 Cricket Australia vs India, 3rd ODI
Get the latest updates on Fifa Worldcup 2022 and check out  Fifa World Cup Schedule, Stats and Live Cricket Score. Like us on Facebook or follow us on Twitter for more sports updates. You can also download the NDTV Cricket app for Android or iOS.