India vs Australia: India Beat Australia For 1st Test Win Down Under In 10 Years

The last time India defeated Australia in a Test match in their own backyard was back in 2008 in Perth. 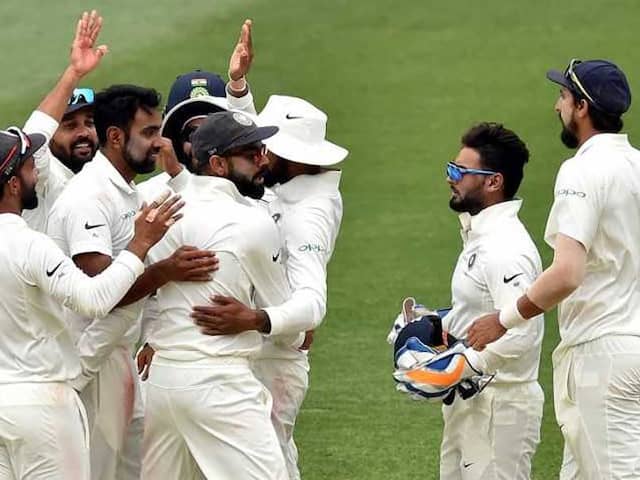 India beat Australia by 31 runs in the opening Test for their first victory in Adelaide since 2003.© AFP

India pulled off a stunning 31-run win over Australia to register their first victory in a Test Down Under in 10 years. The last time India defeated Australia at home was back in 2008 in Perth. This is also the visitors' first victory in Adelaide since 2003. Ravichandran Ashwin, who took three wickets in the final innings, put the final nail in Australia's coffin to end the hosts' admirable rearguard action. Pacers Jasprit Bumrah and Mohammed Shami were also crucial to India's cause, picking three wickets each while Ishant Sharma chipped in with one.

Pat Cummins (28), Mitchell Starc (28) and Nathan Lyon (38 not out) made valuable contributions with the bat to frustrate Virat Kohli's team but fell agonisingly short after Josh Hazlewood (13) was caught at second slip by KL Rahul off the bowling of Ashwin.

Shaun Marsh, who was 31 not out at stumps on Day 4, scored his 10th Test half-century but fell for 60 to a brilliant Jasprit Bumrah. Tim Paine also showed some fight on the final day but Bumrah was again at hand to dismiss the Australian captain for 41 and put India on the brink.

However, Starc and Cummins added 41 runs for eighth wicket to give the hosts a glimmer of hope. Mohammed Shami broke the partnership to give India the crucial breakthrough but it was then the turn of Lyon and Cummins to frustrate the Indians.

The Australian pair added another 31 runs to put Australia within touching distance of the target. However, Bumrah got Cummins to edge a delivery to Virat Kohli at slips  who after taking the catch threw the ball down hard at the ground.

With India needing just one wicket to win, in walked Australia's No.11 Hazlewood, who batted bravely for 43 balls. Lyon and Hazlewood strung together a 32-run stand for the final wicket as Australia started dreaming of an unlikely victory.

However, Ashwin dashed the home side's hopes with a flighted delivery finding the edge of Hazlewood's bat.

In doing so, he beat the record 10 catches in a game by an Indian that was previously held by Wriddhiman Saha.

It was a huge breakthrough for Virat Kohli's men, with Australia always proving a tough hunting ground.

Australia resumed the final day needing another 219 for victory with four wickets down, but lost their last two specialist batsmen before lunch, shifting the odds heavily in India's favour.

Marsh and Travis Head had started cautiously, grinding out 11 runs in the opening seven overs before seamer Ishant Sharma struck with the score on 115, bowling a bouncer that caught Head's bat as he tried to fend it off and Ajinkya Rahane took the catch at gully.

Paine joined Marsh and they upped the ante, capitalising on some loose balls from Shami to chip away steadily and close the gap.

By lunch Australia had fought to 186 for 6, still needing a further 137 runs for victory, with Paine not out 40 and Pat Cummins on five.

But in the second over after they resumed Paine top edged a pull shot from Bumrah and Pant easily took a catch.

Cummins, who survived two big reviews within four balls, with the technology both times going in his favour, showed fantastic application with Mitchell Starc in a 41-run eighth wicket stand.

And when the runs needed dropped below 100, the crowd dared to dream before Starc fell to Shami for 28. It brought Nathan Lyon to the crease and he got the pulses racing with a quick 38 to set up a tense finale before Hazlewood departed.

Adelaide Oval, Adelaide Australia vs India 2018/19 Cricket Australia vs India, 1st Test
Get the latest updates on IPL 2020, check out the IPL Schedule for 2020 and Indian Premier League (IPL) Cricket live score . Like us on Facebook or follow us on Twitter for more sports updates. You can also download the NDTV Cricket app for Android or iOS.