Jack Leach remained unbeaten on one during the 76-run stand with Ben Stokes in England's dramatic win over Australia in the third Ashes Test. 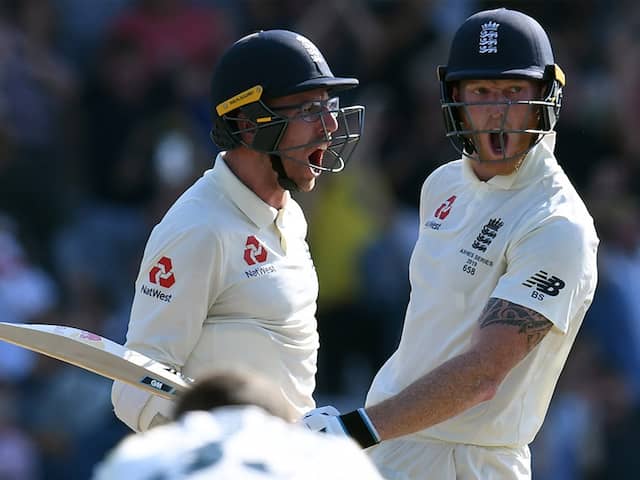 Jack Leach and Ben Stokes put on 76 runs for the last wicket to help England level the five-match series.© AFP

Ben Stokes played an unbelievable knock of 135 that saw England chase down 359 against Australia on the fourth day of the third Test. However, it was Jack Leach, the number 11 batsman who stood his ground and supported Stokes to eventually finish the match off. Stokes stitched together a 76-run stand with England's No.11, out of which the former scored 75 runs. After the win, Stokes took to Twitter to ask the official sponsors of the ongoing Ashes series, Specsavers to give free glasses to Jack Leach.

"Jack Leach........ @Specsavers do your self a favour and give him free glasses for life @jackleach1991," Stokes tweeted.

Jack Leach........@Specsavers do your self a favour and give him free glasses for life @jackleach1991

"We can confirm we will offer Jack Leach free glasses for life," the tweet read.

We can confirm we will offer Jack Leach free glasses for life https://t.co/7rfPBK77GS

In the match, England were bowled out for 67 runs in their first innings. Australia set the hosts a target of 359 as Marnus Labuschagne scored his third consecutive Ashes half-century.

England lost their openers for 15 runs and were staring down the barrel early on in the chase but captain Joe Root and Joe Denly put on a 126-run stand to keep England in the hunt of chasing down the total at the end of the third day's play.

On the fourth day, Australia managed to pick wickets at regular intervals but Stokes stood his ground and launched a counterattack when Jack Leach came in to bat. Stokes' blistering knock helped England chase down the target and stay alive in the five-match series.

The fourth Test is scheduled to be played in Manchester, starting from September 4.

Ben Stokes The Ashes 2019 Cricket
Get the latest Cricket news, check out the India cricket schedule, Cricket live score . Like us on Facebook or follow us on Twitter for more sports updates. You can also download the NDTV Cricket app for Android or iOS.