Mustafizur Rahman injured his ankle while warming up for a Dhaka Premier League match. 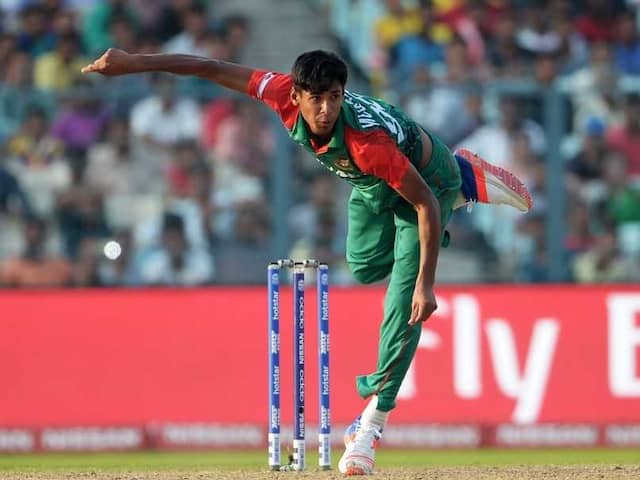 Mustafizur Rahman was included in the 15-member Bangladesh World Cup squad despite his injury.© AFP

Mustafizur Rahman, the pace spearhead of the Bangladesh cricket team, injured his ankle whilst warming up for a Dhaka Premier League match last Thursday, which will keep him out of action for around two weeks. This has made it all the more worrisome for the Bangladesh Cricket Board (BCB), as he joins a list of important players such as batsman Mahmudullah, wicketkeeper-batsman Mushfiqur Rahim and seamer Rubel Hossain who are currently injured. Despite the injury fears, the left-arm pacer was included in the 15-member Bangladesh World Cup 2019 squad along with the other three injured trio.

Mahmudullah suffered a shoulder injury during the recent tour of New Zealand, Rubel is struggling with a side strain and Mushfiqur is still nursing the broken rib-cage from the Asia Cup last year.

Mustafizur was last year barred by the BCB from playing franchise-based cricket abroad, including the Indian Premier League (IPL) for Mumbai Indians. BCB had allowed him to participate in the domestic league to keep him fit for the ICC World Cup that begins in the UK on May 30.

"There is no fracture-related injury (but) there is some pain in the ligament, a lateral ankle sprain," BCB chief physician Debashish Chowdhury was quoted as saying to icc-cricket.com.

Chowdhury was hopeful though, that all the players will eventually get better and be match-fit for the World Cup.

"With the amount of time we have and the current improvement rate of the players, I don't think anyone will miss the World Cup".

Bangladesh will begin their preparations for the 2019 World Cup by participating in an ODI tri-series with Ireland and West Indies, beginning from May 5.

Rubel Hossain World Cup 2019 Cricket
Get the latest Cricket news, check out the India cricket schedule, Cricket live score . Like us on Facebook or follow us on Twitter for more sports updates. You can also download the NDTV Cricket app for Android or iOS.