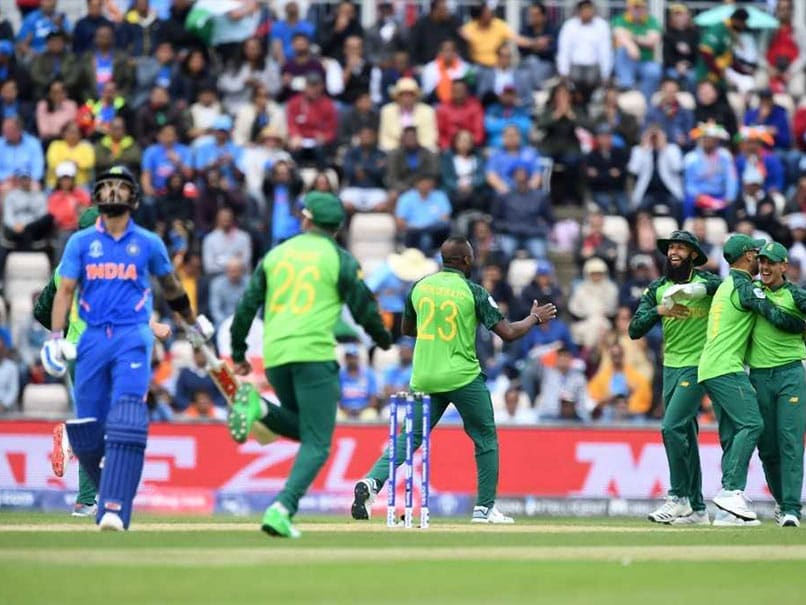 Virat Kohli played an uncharacteristic innings as he scored just 18 runs off 34 deliveries in India's World Cup 2019 opener against South Africa at the Rose Bowl in Southampton on Wednesday. However, Kohli's uneventful innings came to an end with a stunning one-handed catch by South Africa wicketkeeper Quinton de Kock. Bowling his third over, Andile Phehlukwayo got some extra bounce and Virat Kohli decided to play away from his body. The ball got a thick outside edge off Virat Kohli's bat as he tried to play it down the pitch. Although the ball was on a rise after touching Virat Kohli's bat, Quinton de Kock dived full length to his right to pluck an astonishing one-handed catch.

Chasing 228 to win, India lost Shikhar Dhawan early as Kagiso Rabada delivered in his third over. Rohit Sharma and Virat Kohli then patiently waited for loose deliveries and India managed to put on just 50 runs in first 15 overs.

The South African innings never got going as they were struggling at 161/7 after 40 overs.

But some counter-attacking batting late in the innings from Chris Morris and Kagiso Rabada took South Africa to 227/9 in 50 overs.

Morris, batting at number eight, scored a fighting 42 during an eighth-wicket partnership of 66 with Rabada, who made an unbeaten 31, his highest ODI total.

Yuzvendra Chahal was the pick of the Indian bowlers as he returned figures of 4/51 to rip apart the South African batting line-up.

Quinton de Kock World Cup 2019 Cricket South Africa vs India, Match 8
Get the latest updates on ICC T20 Worldcup 2022 and CWG 2022 check out the Schedule, Live Score and Medals Tally. Like us on Facebook or follow us on Twitter for more sports updates. You can also download the NDTV Cricket app for Android or iOS.