The ICC put out a sketch of Virat Kohli sitting on a throne with a crown, an image that brought up mixed reactions. 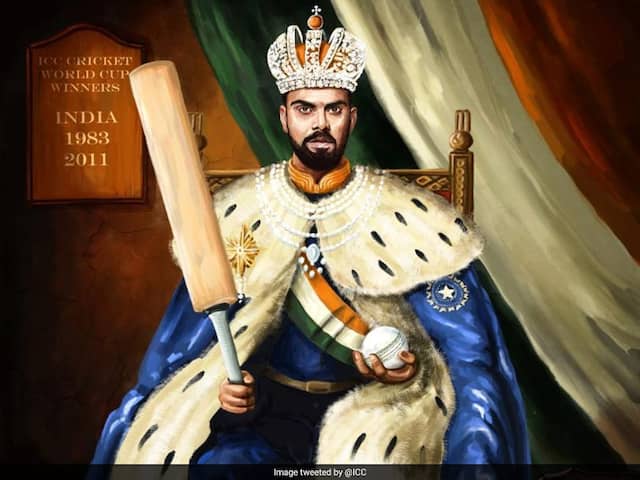 Virat Kohli will be the fulcrum of India's famed batting line-up during the World Cup.© Twitter @icc

Virat Kohli, who is popularly known as 'King Kohli', became the subject of an illustration shared by the International Cricket Council (ICC) on their Twitter handle on Wednesday. The ICC shared a sketch of India skipper sitting on a throne with a crown on his head and a bat in his hand. Although some fans lauded ICC's gesture, others were left fuming. Fans believe that ten teams are fighting it out for the coveted World Cup and such a picture gives out a wrong impression.

kindly be mature dnt be biased... India is not the only country who participated in CWC...

Too conspicuous! Common guys, there's such a thing as subtlety. Don't make them hate us more than they already do.

Note:
Watch the corresponding @patriotact episode to get the context.

Is it ICC link or BCCI link??? Kindly maintain some neutrality

After seeing this kind of appraisal from @ICC other teams supports will be like:-
Are we a joke to you or India is the only team that participating in #CWC19
and at least the host nation didn't got this kind of prise Or hype for their opening match. #TeamIndia#India#INDvSA

Virat Kohli will be the fulcrum of India's famed batting line-up during the World Cup that began in England and Wales on Thursday.

Virat Kohli, arguably the best batsman in the world right now, will hold the key to India's chances in the quadrennial event where he is expected to cross 11,000 ODI runs and also add a few more hundreds to his tally of 41.

Although this is the third World Cup for Virat Kohli, it is the first time that he is leading the team.

"It is the most challenging World Cup, any team can upset any team. Team will have to adapt very quickly," Kohli said at the pre-departure press conference in Mumbai last week.

"We expect all kind of scores in the World Cup, but there would be few high scoring games looking at the predictions," Virat Kohli added.

Virat Kohli World Cup 2019 Cricket South Africa vs India, Match 8
Get the latest Cricket news, check out the India cricket schedule, Cricket live score . Like us on Facebook or follow us on Twitter for more sports updates. You can also download the NDTV Cricket app for Android or iOS.