Vijay Shankar was hit on the forearm by a delivery from Khaleel Ahmed as he attempted a pull shot during India's net session on Friday. 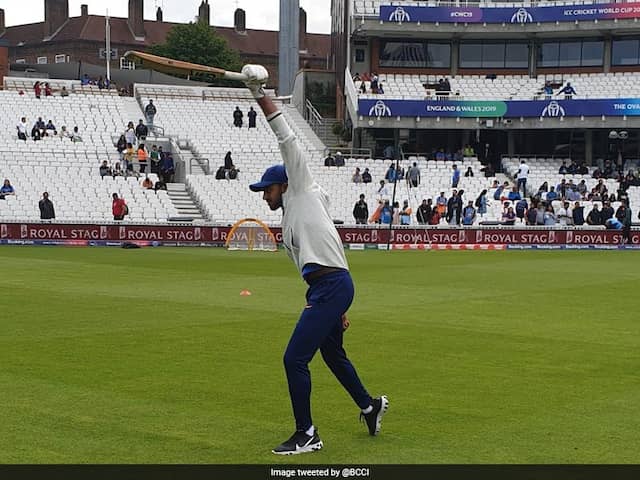 Vijay Shankar was seen taking some throwdowns before the start of India's first warm-up game.© Twitter

The Indian team management can have a sigh of relief as all-rounder Vijay Shankar's scan reports have come in and he has no fracture. In fact, the batsman touted to bat at no.4 for the team in the World Cup was also seen taking some light throwdowns before the start of India's first warm-up game against New Zealand in London on Saturday. "Vijay Shankar was hit on his right forearm during practice on Friday. He underwent scans and no fracture has been detected. BCCI Medical Team is aiding him in his recovery," the BCCI said on Twitter.

Shankar was hit on the forearm by a delivery from Khaleel Ahmed as he attempted a pull shot during India's net session on Friday. The reports come as a welcome sign for the team as the top-order batsmen struggled in overcast conditions against the Kiwi pacers on Saturday.

During the pitch report, former South Africa skipper Shaun Pollock said: "It's cloudy and overcast, plenty of grass on the wicket." And India's score read 24/3 in the sixth over after Virat Kohli won the toss and decided to bat first.

In fact, after Shikhar Dhawan (2) and Rohit Sharma (2) were both dismissed by Trent Boult, the much spoken about No.4 slot saw KL Rahul walk in to join skipper Kohli. With the score on 10/2 in the fourth over and the world waiting to see Rahul weave his magic, the batsman ended up playing on one from Boult in the sixth over of the innings.

Rohit was dismissed in a typical fashion as the ball from Boult pitched in line and came back in to trap the opener right in front of the wicket. For Dhawan, the lack of footwork once again was on display and the edge landed safely in the hands of the keeper. As for Rahul, the Kiwi pace spearhead decided that he had pitched enough deliveries in the driving zone and pitched one short to catch Rahul unaware.

Kohli too managed just a 24-ball 18 as one from Colin de Grandhomme came in after pitching and sneaked in through the gap in bat and pad to give the Indian scorecard a sorry figure of 39/4 in the 11th over.

India Cricket Team World Cup 2019 Cricket Vijay Shankar BCCI
Get the latest Cricket news, check out the India cricket schedule, Cricket live score . Like us on Facebook or follow us on Twitter for more sports updates. You can also download the NDTV Cricket app for Android or iOS.