Steve Smith was booed, with chants of "cheater, cheater", making the rounds while he was fielding at third man during India-Australia World Cup match. 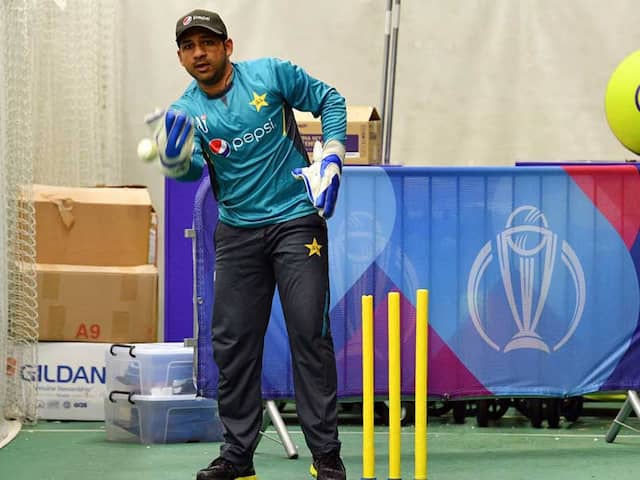 Sarfaraz Ahmed's Pakistan will take on Australia in World Cup on Wednesday.© AFP

Pakistan captain Sarfaraz Ahmed claimed his team fans won't boo Australia's Steve Smith with the chants of "cheater", like the way Indian fans did when the two sides clashed at Kennington Oval, London, on Sunday. Sarfaraz Ahmed-led Pakistan will take on Australia in a World Cup 2019 league stage match at the The Cooper Associates County Ground, Taunton, on Wednesday. "I don't think Pakistani people will do that. Pakistani people love cricket, they love to support and they love the players," Sarfaraz Ahmed said.

Smith, who was the captain of the ball-tampering controversy which took place last year, was first booed, with chants of "cheater, cheater", making the rounds while he was fielding at third man during the Indian innings. All-rounder Hardik Pandya had just been dismissed, and the crowd tried to get under Smith's skin with the chants.

Indian skipper Virat Kohli, who was batting at the time, looked up towards that section of the stadium and gestured them not to do so. He instead made a "clap" gesture and pointed towards Smith. The Indian skipper also did the same when Smith walked past, with both players shaking hands.

And with Pakistan fans expected to make up a large chunk of the crowd in Taunton, there are fears they might follow the example of the Indian supporters and give a tough time to Smith and David Warner.

While the gesture from Kohli took many by surprise given his past relationship with the Australian players, the Indian batting mainstay was appreciated by many for his sportsmanship.

Pakistan currently stand at the eighth spot in the points table with three points in three games.

After beginning their tournament campaign on a horrible note against West Indies, the 1992 champions came out with a much improved performance and defeated tournament favourites England.

However, they were left frustrated as their next match against Sri Lanka was washed out without a ball being bowled.

Steve Smith Australia vs Pakistan, Match 17
Get the latest Cricket news, check out the India cricket schedule, Cricket live score . Like us on Facebook or follow us on Twitter for more sports updates. You can also download the NDTV Cricket app for Android or iOS.