World Cup: New Zealand will hope to avenge a 119-run league stage defeat when they face England in the final on Sunday. 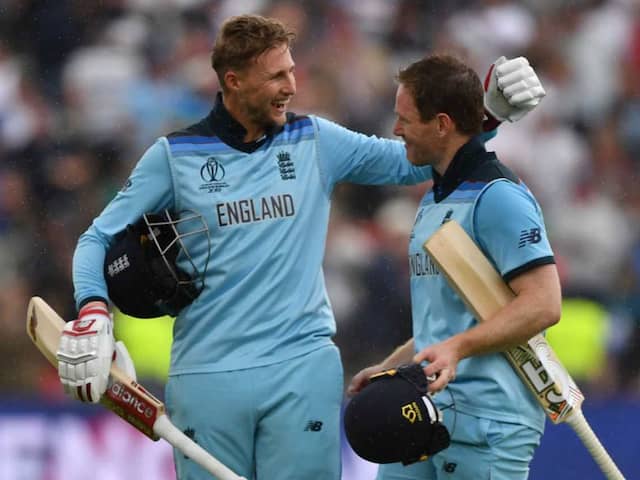 England registered a convincing eight-wicket win in the semi-final at Edgbaston.© AFP

England will look to put their best foot forward when they take on New Zealand in a bid to clinch a maiden World Cup title at Lord's on Sunday. New Zealand too have not won a World Cup ever in their history, with their best being a runners-up finish in the 2015 edition of the ICC mega event. England have played a semi-final clash thrice before and have no impressive record in One-day Internationals at Lord's. Therefore the team that keeps calm in the pressure of the summit clash will be successful in London.

En route to the final, England started their campaign with a comprehensive 104-run win over South Africa at Kennington Oval in London on Thursday.

The hosts suffered a jolt just after a good start and failed to pull off a chase of 349 against Pakistan in Nottingham. The Trent Bridge, a venue where England scored record highest ODI totals twice, saw England suffer a shock 114-run loss to Pakistan.

However, England's campaign was once again derailed as Sri Lanka and Australia handed them defeats in back-to-back matches.

A 20-run loss to Sri Lanka at Headingley was followed by a 64-runs defeat to defending champions Australia at Lord's. England have not played a single match at Lord's since then.

In their last two league stage matches, England defeated India by 31 runs in Birmingham and New Zealand by 119 runs in Chester-le-Street.

Eoin Morgan-led England avenged their league stage defeat to Australia, with a convincing eight-wicket win in their semi-final encounter at Edgbaston.

In the final, New Zealand will hope to avenge a 119-run league stage defeat when they face the home team again on Sunday.

Eoin Morgan World Cup 2019 Cricket New Zealand vs England, Final
Get the latest Cricket news, check out the India cricket schedule, Cricket live score . Like us on Facebook or follow us on Twitter for more sports updates. You can also download the NDTV Cricket app for Android or iOS.