NZ vs ENG: The weather, after playing hide and seek throughout the tournament, is expected to remain clear for the World Cup 2019 final on Sunday. 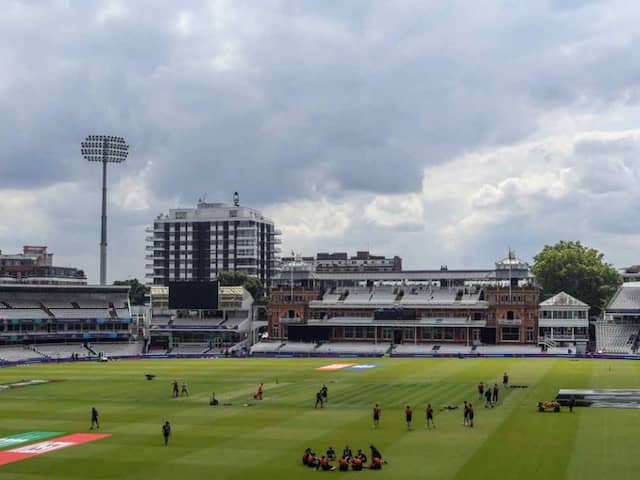 World Cup 2019: Chances of rain are nil throughout the day in London.© AFP

The World Cup 2019 final between New Zealand and England at Lord's on Sunday saw some rain intervention before the start of the game. The light showers delayed the time of toss by 15 minutes in London. Both England and New Zealand will be aiming for their maiden World Cup glory in London. England, after a solid start in the World Cup 2019, lost their momentum but they got their confidence back with terrific wins over India and New Zealand further in the league stage matches. In the semi-final, England registered an emphatic win over arch-rivals Australia to book their tickets for the final. New Zealand, on the other hand, are also high on confidence after beating India in the semifinal.

The first semi-final between India and New Zealand had turned out to be a two-day One-day International affair due to rain. However, the World Cup final is expected to be a complete 50-over a side game.

The weather, after playing hide and seek throughout the tournament, is expected to remain clear on Sunday. The sky will remain mostly cloudy from the time of toss to the completion of the match but the chances of rain are nil. The sunny spells are anticipated.

As the game proceeds, the skies are expected to be clear for a full game. According to AccuWeather, no rain is predicted throughout the final clash between New Zealand and England. The precipitation of rain is 4%. The temperature is expected to range from 21 to 23 degree celsius.

Lord's, London World Cup 2019 New Zealand vs England, Final Cricket
Get the latest Cricket news, check out the India cricket schedule, Cricket live score . Like us on Facebook or follow us on Twitter for more sports updates. You can also download the NDTV Cricket app for Android or iOS.