While all the other captains were dressed in formal suits, Pakistan captain Sarfaraz Ahmed wore a traditional outfit to meet Queen Elizabeth and other members of the Royal family. 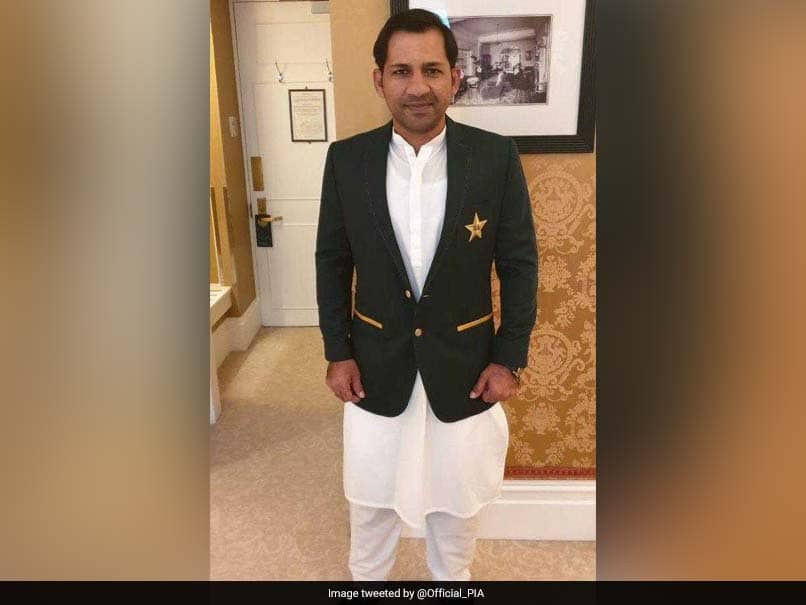 Sarfaraz Ahmed was dressed in traditional attire as all the captains meet Queen Elizabeth.© Twitter

Even as all the captains of the teams participating in the World Cup 2019 looked dapper dressed in smart suits when they met Britain's Queen Elizabeth II, Prince Harry and others from the Royal family, Pakistan captain Sarfaraz Ahmed bravely stood out by sporting a traditional outfit from his country. Sarfaraz Ahmed attended the Royal meet dressed in a white shalwar kameez with the Pakistan team's green blazer to back it up. While there were many who applauded Sarfaraz Ahmed for sticking to his roots, there were a few detractors as well, none more scathing than Pakistan-born Canadian writer Tarek Fatah.

Tarek Fatah trolled Sarfaraz Ahmed for being "dressed in pyjamas", adding that he was surprised the Pakistan skipper "didn't come in his Lungi-Banyan-Topi costume".

Every other captain, Afghanistan, Australia, Bangladesh, England, India, SouthAfrica, NewZealand, West Indies & Zimbabwe is smartly turned out in jacket & tie, but no, not the Pakistani. No sir, not him. I'm surprised he didn't come in his Lungi-Banyan-Topi costume. How does ...?

While many Pakistanis hit back at Tarek Fatah for his comments, there were numerous Indian fans who came out in defence of Sarfaraz Ahmed.

See absolutely nothing wrong with that. He is dressed well, looks good, embraces his culture, is confident enough to wear what he is comfortable in. See no reason for making any concessions for the queen.

I was not expecting this from you. Mahatma Gandhi met King in London in Dhoti. His advisers called him dont do that ,he replied I want to show that king robbed me n my country,I have nothing to luxury.

I differ on this. what is the harm if someone dresses in his own country's dress. why it is essential to wear suit in England? If that be so, will every foreigner visiting PM Modi, should essentially wear kurta paizama? and alternately should all ladies wear skirt in England?

What's wrong? If it was me I would have probably gone in a traditional south Indian attire. That's my wish. That's Indian, That's subcontinent's culture. There is nothing wrong in going in a western attire but there is no need to ridicule someone for wearing traditional attire

It's really sad that even in such a competitive world, we are judging based on clothes. Let me remind you sir, we Indians too have almost same culture and it's good if @SarfarazA_54 wants to promote his culture. Also, GROW UP.

For once i dont see anything wrong in this...
Ideally all the captains should have dressed in their native "poshaakhs"...

Does the queen wear a saree when she comes here to visit heads of states? Or her children n grandkids adhere to other cultures dress codes? No!

Indian captain Virat Kohli too met the Queen and, standing next to England captain Eoin Morgan, was all smiles in the picture tweeted by Board of Control for Cricket in India (BCCI).

The World Cup 2019, to be contested in a round-robin format, began on Thursday with hosts England beating South Africa in the tournament opener at Kennington Oval, London.

Pakistan, led by Sarfraz Ahmed, will look to draw inspiration from their Champions Trophy 2017 triumph and begin their World Cup 2019 on a positive note against a power-hitting West Indies side at the Trent Bridge in Nottingham on Friday.

Pakistan have lost their past ten One-day Internationals (ODI) including a 5-0 whitewash by Australia and 4-0 thumping by England and their problems were further compounded when they went down to outsiders Afghanistan by three wickets in a warm-up match.

Sarfaraz Ahmed World Cup 2019 Cricket
Get the latest updates on India vs Australia Series, check out the India vs Australia Schedule for 2020-21 and Ind vs Aus live score . Like us on Facebook or follow us on Twitter for more sports updates. You can also download the NDTV Cricket app for Android or iOS.