Virat Kohli and the other team captains for the World Cup 2019 met Queen Elizabeth II at the Buckingham Palace ahead of the tournament. 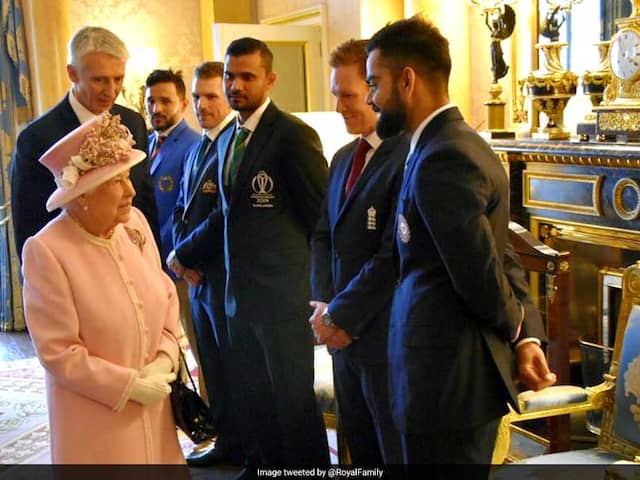 Virat Kohli met Queen Elizabeth II before the beginning of the World Cup 2019, where he will lead the Indian team for the first time in the 50-over ICC showpiece event. The Indian skipper visited the iconic Buckingham Palace along with other captains of the World Cup 2019 participating teams ahead of the Opening Party at the Mall on Wednesday. While many Indians were soaked up in joy and pride, some came up with hilarious comments on Virat Kohli's photographs with Queen Elizabeth on social media.

"Captains including @Eoin16 and @imVkohli met Her Majesty and His Royal Highness before joining a Garden Party at Buckingham Palace," The Royal Family captioned a picture of the Queen looking at Virat Kohli.

Captains including @Eoin16 and @imVkohli met Her Majesty and His Royal Highness before joining a Garden Party at Buckingham Palace. pic.twitter.com/AjS5eZBrVH

The Board of Control for Cricket in India (BCCI) joined in saying: "Skipper meets the Queen #CWC19".

Reacting on the pictures, some Indian fans reminded Kohli of the Kohinoor diamond that was taken from India and is now part of the Crown Jewels.

The reminders came much in shape of memes that left Twitter in splits.

When you realize India still has the real Kohinoor!
IT'S KOHLINOOR.
#ICCWorldCup2019 #TeamIndia pic.twitter.com/djkoTDFMII

The World Cup 2019, to be played in a round-robin format, started on Thursday with England taking on South Africa in the opener in London.

Kohli-led India will open their World Cup 2019 campaign against South Africa at The Rose Bowl, Southampton, on June 5.

MS Dhoni, who led India to their second title in 2011, will guide the team and captain Kohli with his experience from behind the stumps in the ongoing edition.

Virat Kohli World Cup 2019 Cricket South Africa vs India, Match 8
Get the latest updates on IPL 2020, check out the IPL Schedule for 2020 and Indian Premier League (IPL) Cricket live score . Like us on Facebook or follow us on Twitter for more sports updates. You can also download the NDTV Cricket app for Android or iOS.