Queen Elizabeth II and Prince Harry met the captains of the World Cup 2019 teams at the Buckingham Palace ahead of the tournament. 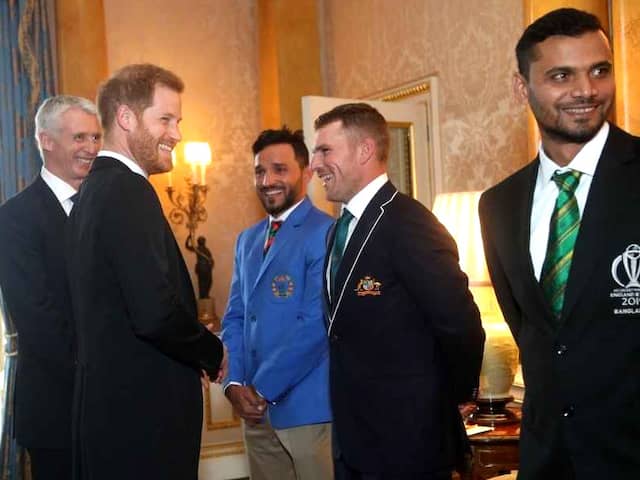 Queen Elizabeth II and Prince Harry met the captains of the ten teams participating in the Cricket World Cup at the Buckingham Palace on Wednesday. As it is well known that England and Australia share a fierce cricketing rivalry, Prince Harry, the Duke of Sussex, took a cheeky dig at Australia captain Aaron Finch. "You're getting on a bit now, aren't you? How long have you been playing?" Prince Harry was quoted by express.co.uk as asking Finch. The 32-year-old Australian took the remark sportingly and told Prince Harry that he had been playing for eight years at the highest level.

Moreover, Finch told Prince Harry that "England and India" are the favourites to win the World Cup.

Prince Harry then told Sri Lanka captain Dimuth Karunaratne, "Enjoy it, if you're not going to enjoy it you might as well not be here".

Virat Kohli also met the Queen and Prince Harry ahead of World Cup 2019 opening party at The Mall, in front of the Buckingham Palace in Central London.

During the garden party at the Buckingham Palace, the Queen also met the group of world-class bowlers, batsmen and all-rounders.

Prince Harry will be at the Oval on Thursday to watch England take on South Africa in the World Cup opener.

It will be the first fixture of a World Cup where all 10 teams will play each other in the group phase ahead of the knockout stages that will culminate with a final at Lord's in London on July 14.

Aaron Finch World Cup 2019 Cricket
Get the latest Cricket news, check out the India cricket schedule, Cricket live score . Like us on Facebook or follow us on Twitter for more sports updates. You can also download the NDTV Cricket app for Android or iOS.