Imran Tahir took a much crucial scalp of Aaron Finch, while all-rounder JP Duminy contributed with 14 runs in South Africa's win in Manchester. 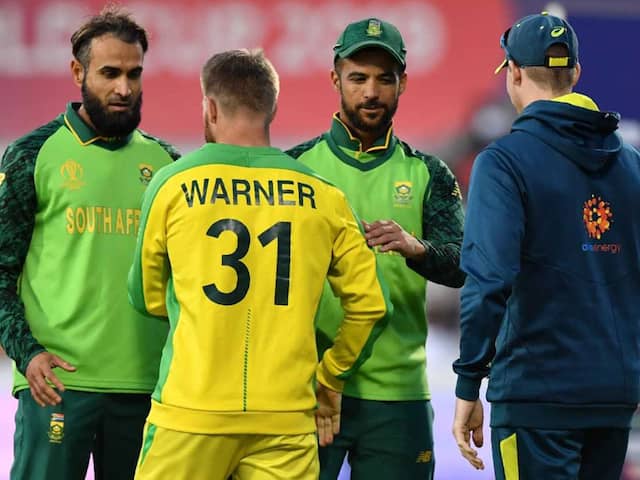 With a defeat to South Africa, Australia lost their top position to India.© AFP

Imran Tahir and JP Duminy ended their One-day International careers with South Africa's 10-run win over Australia, a consolation in the World Cup 2019, at Old Trafford on Saturday. In their last ODI appearance, Imran Tahir took a much crucial scalp of Australia captain Aaron Finch, while all-rounder JP Duminy contributed with 14 runs in South Africa's famous win in Manchester. Imran Tahir, the 40-year-old leg-spinner, concluded his ODI career with 173 wickets in 107 matches with a best figures of 7/45. JP Duminy, on the other hand, scored 5117 runs in 199 ODI matches at a strike-rate of 84.58. The off-spinner also claimed 69 ODI wickets with a career-best spell of 4/16.

"As a team, we need to think about finishing on a good note. But it makes me feel very sad and emotional that I'm going to leave," Tahir said as quoted by AFP.

"It was always my dream to play international cricket and I'm really grateful to everyone who helped me along on the way. They accepted me for who I was, the guy who came from overseas.

"It's a big moment of my life -- I always wanted to play cricket and play as long as I could and now is the right time to go.

"It will be quite a hurtful and sad moment for me but I've prepared myself for that, so hopefully it will go well for me and the team."

Tahir added: "I'm not worried about (the) future of the team -- there are a lot of youngsters.

"I strongly believe there is lots of talent but they just need experience and then they'll get to the stage where everyone wants to see South African cricket.

"People expect higher and a lot from us -- this World Cup was totally different but I'm pretty sure things will be fine for South Africa."

With a defeat to South Africa, Australia lost their top position to India, who beat Sri Lanka earlier on Saturday.

Had Australia won, they would have faced fourth-placed New Zealand in the first semi-final at Old Trafford on Tuesday.

But instead they will play resurgent hosts England in the second semi-final at Edgbaston on Thursday.

JP Duminy World Cup 2019 Cricket Australia vs South Africa, Match 45
Get the latest Cricket news, check out the India cricket schedule, Cricket live score . Like us on Facebook or follow us on Twitter for more sports updates. You can also download the NDTV Cricket app for Android or iOS.