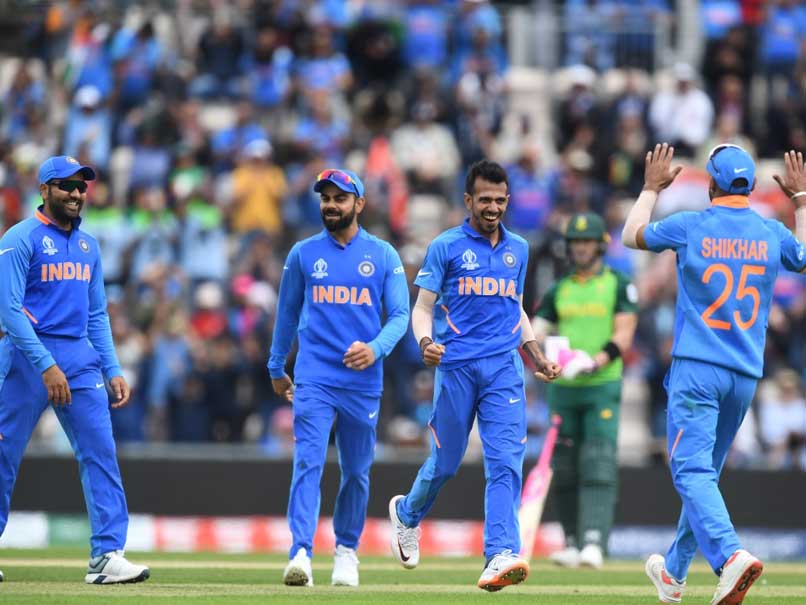 Rohit Sharma saw the team home with an unbeaten innings of 122.© AFP

Virat Kohli, after losing the toss in the first game of the World Cup 2019, marshalled his troops to restrict a power-packed South African batting line-up to 227/9. Yuzvendra Chahal bagged four wickets for 51 runs in his 10 overswhile Jasprit Bumrah bowled the most economical spell of this year's World Cup finishing with figures of 2-35. Chasing a target of 228, India lost the wicket of Shikhar Dhawan in the fifth over but Rohit Sharma and Virat Kohli steadied the ship with a 41-run stand. While Virat Kohli failed to start another World Cup with a hundred, it was the vice-captain who rose to the occasion and saw the team home with an unbeaten innings of 122.

The top-order trio who have scored majority of the runs for the Men in Blue in the last couple of years will play a pivotal role in India's campaign, believes former chief selector, Krishnamachari Srikkanth.

"The trio of Shikhar Dhawan, Sharma and Kohli will be crucial to India's chances so it is a great sign that Sharma got a hundred and saw them over the line," Srikkanth said.

Rohit, who failed in the two warm-up games scoring two and 19 against New Zealand and Bangladesh respectively, showed great composure with the bat to weather the storm against Kagiso Rabada and Chris Morris who were getting help from the wicket in Southampton on an overcast day.

Speaking on Sharma's hundred, the former opening batsman said that "Rohit Sharma's return to form is the biggest positive for India after the first game of the tournament. Opening batsmen are crucial at the ICC Men's Cricket World Cupand Sharma more than anyone has that ability to turn it on."

The 32-year-old opening batsman was adjudged man of the match for his knock.

Srikkanth elucidated that Rohit is someone who has the ability to switch gears during the course of his innings. "For India, having someone who can go and get not just hundreds but even double hundreds is a major asset and also relieves the pressure on Virat Kohli a little."

Apart from Rohit, KL Rahul and MS Dhoni too showed positive signs with the bat.  "I think it is true in all formats that partnerships win matches. You cannot rely on the individuals, and that was very impressive from India to see significant partnerships from a few players," Srikkanth added.

KL Rahul World Cup 2019 South Africa vs India, Match 8 Cricket
Get the latest updates on Fifa Worldcup 2022 and check out  Fifa World Cup Schedule, Stats and Live Cricket Score. Like us on Facebook or follow us on Twitter for more sports updates. You can also download the NDTV Cricket app for Android or iOS.