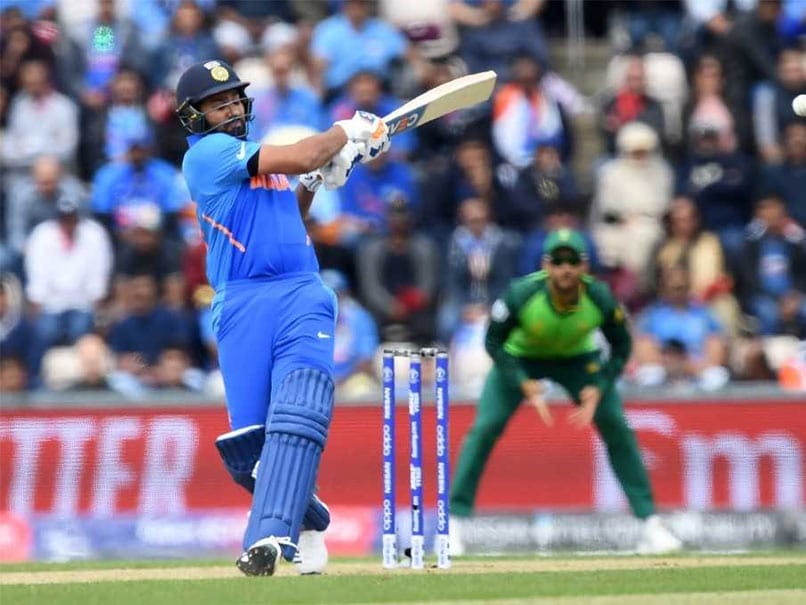 Rohit Sharma became the first India to score a century in the World Cup 2019.© AFP

Rohit Sharma took the matter into his own hands with a gritty century after India were dealt early blows in their World Cup 2019 opener against South Africa at The Rose Bowl in Southampton on Wednesday. He also became the third highest century scorer in all-time list for India behind Sachin Tendulkar and Virat Kohli. Moreover, Rohit Sharma also became the first Indian centurion of the ongoing World Cup, which came off 128 balls. Rohit Sharma's knock was laced with 10 boundaries and two hits over the fence as he led India's fightback at the top of the order. Rohit Sharma's century comes after he led Mumbai Indians to the fourth Indian Premier League (IPL) 2019 title, earlier this year.

Rohit Sharma was also the top scorer of the India vs South Africa clash. For South Africa all-rounder Chris Morris had managed to score 42 runs to help his side recover from 158/7 to 227/9 in the stipulated 50 overs.

With an experience of over 200 One-Day International (ODI) matches, Rohit is one of the vital cog for India in the World Cup 2019. He has accumulated over 8,000 runs at an average of over 47 and proved to be a match-winner. Apart form 23 centuries now, Rohit Sharma also has 41 half-centuries to his name.

Rohit Sharma Cricket
Get the latest updates on India vs South Africa and check out  Schedule, Results and Live Score. Like us on Facebook or follow us on Twitter for more sports updates. You can also download the NDTV Cricket app for Android or iOS.