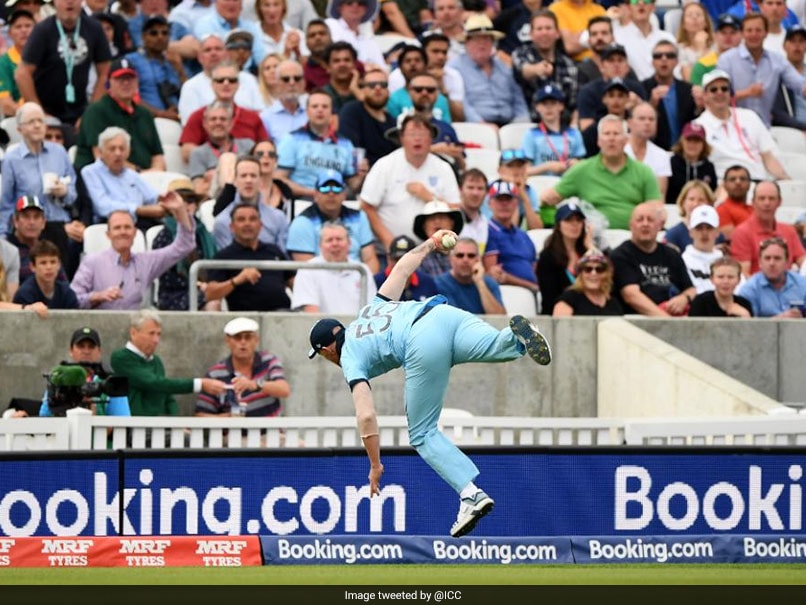 Ben Stokes was adjudged the man-of-the-match for his all-round heroics.© Twitter

Ben Stokes dominated the ICC World Cup 2019 opening match between England and South Africa at Kennington Oval, London, on Thursday. The 27-year-old all-rounder top-scored for England with 89 runs off 79 balls, including nine boundaries, claimed two wickets, took two catches and effected a run out of Dwaine Pretorius (1). However, one catch that helped Adil Rashid dismiss Andile Phehlukwayo (24) in the 35th over impressed one and all in the much awaited World Cup 2019 opener. The International Cricket Council (ICC) lauded Ben Stokes in a tweet, saying: "Ben Stokes has just taken one of the greatest catches you will EVER see!"

Stokes, back-pedalling and diving, held a brilliant one-handed catch in the deep to dismiss Phehlukwayo, a crucial dismissal that derailed South Africa's chase.

The ICC later posted the video of the "one of the greatest catches", which started receiving the admiration of fans within no time.

No question about who's the Player of the Match in the #CWC19 opener #ENGvSA #WeAreEngland pic.twitter.com/2pZwa10xEt

England started their World Cup 2019 campaign with a 104-run thrashing of South Africa, with 61 balls left in the game.

Jofra Archer did the early damage with the ball, the fast bowler taking three for 27 in seven overs.

Stokes was one of four England batsmen who got to 50 on a tricky surface, with captain Eoin Morgan (57), Jason Roy (54) and Root (51) all out soon after reaching the landmark.

The left-handed batsman saw his 79-ball knock end in the penultimate over when caught at third man following a reverse hit off paceman Lungi Ngidi (three for 66).

The Oval, London England vs South Africa, Match 1 Cricket
Get the latest updates on India vs South Africa and check out  Schedule, Results and Live Score. Like us on Facebook or follow us on Twitter for more sports updates. You can also download the NDTV Cricket app for Android or iOS.