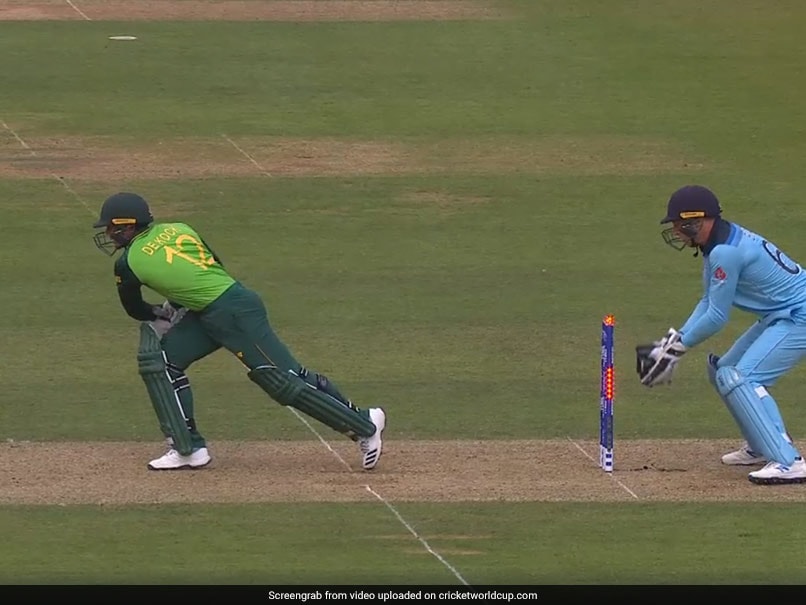 World Cup 2019 registered an early drama after England leg-spinner Adil Rashid deceived South Africa's Quinton de Kock with a googly but the zinger bails, which was lit-up, remained unmoved in the inaugural match at the Kennington Oval in London on Thursday. Similar kind of incidents took the spotlight multiple times in the Indian Premier League (IPL) 2019. It, however, made its debut in the World Cup 2019, in the 11th over of the England vs South Africa clash. The incident left England wicket-keeper Jos Buttler bemused as he failed to gather the ball and it went on to cost four runs for the hosts.

Hit the stumps, didn't dislodge the bails! Hope that's not a sign of things to come regarding our luck this tournament. pic.twitter.com/2rIqBRaEpg

Wicket-keeper batsman de Kock went on to score 68 runs after surviving the scare in South Africa's mammoth chase of 312 runs. His innings was laced with six boundaries and two sixes over the fence.

De Kock's opening partner Hashim Amla had to retire hurt after being hit by a Jofra Archer bouncer.

Amla had made five when he missed an intended pull off the fast bowler, the ball crashing into the grille of his helmet after he was beaten for sheer speed. He had several minutes of on-field treatment before walking off.

The Proteas were then 14 without loss in the fourth over chasing 312 to win on an Oval ground where Amla made a South Africa record 311 not out in a Test against England in 2012.

It was uncertain whether Amla would bat again in the innings, with a statement issued by Cricket South Africa on their Twitter feed saying: "@amlahash has been assessed and is doing fine."

It added: "Due to the sensitive nature of head injuries, he will undergo another reassessment during the course of the innings which will give an indication of his further participation in the match."

Quinton de Kock Cricket
Get the latest updates on Fifa Worldcup 2022 and check out  Fifa World Cup Schedule, Stats and Live Cricket Score. Like us on Facebook or follow us on Twitter for more sports updates. You can also download the NDTV Cricket app for Android or iOS.