After the win, Rohit Sharma was in jubillant mood and he was seen interacting with the fans at the stadium 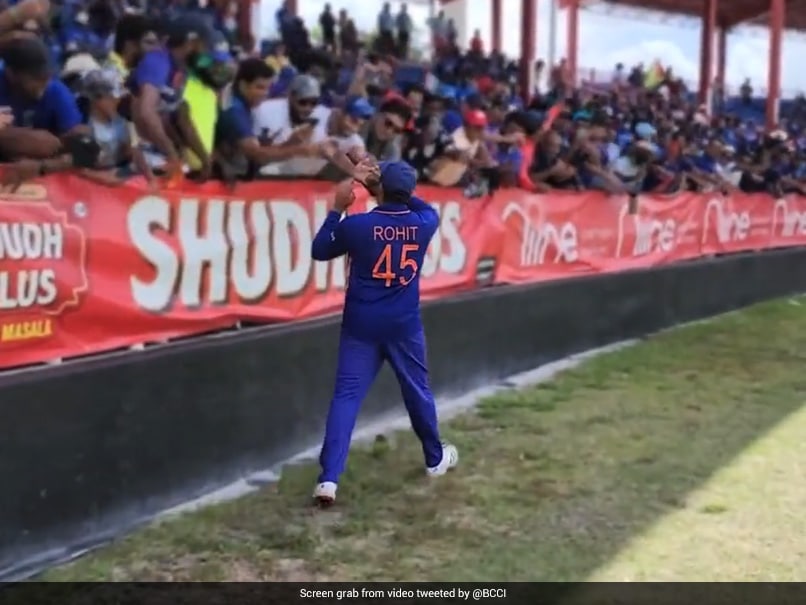 Rohit Sharma-led Team India won the fourth T20I of the five-match series against West Indies by 59 runs on Saturday at Lauderhill, Florida. The visitors did not have any problem in defending 191 and the side bundled out the Nicholas Pooran-led side for 132. Arshdeep Singh starred as he returned with three wickets. After the win, Rohit Sharma was in jubillant mood and he was seen interacting with the fans.

The official Twitter handle of BCCI shared a video of Rohit interacting with the fans in Lauderhill, Florida. He went around the stadium to meet and greet the fans at the stadium.

Talking about the 4th T20I, West Indies won the toss and opted to bowl first.

Team India posted 191/5 in 20 overs, owing to a 44-run knock by wicketkeepe-batter Rishabh Pant. Rohit and Sanju Samson also chipped in with knocks of 33 and 30. For West Indies, Obed McCoy and Alzarri Joseph returned with two wickets each.

West Indies were not able to chase down the target as they kept losing wickets at regular intervals. Avesh Khan, Axar Patel, and Ravi Bishnoi also picked up two wickets each.

Midway during the 4th T20I, the Board of Control for Cricket in India (BCCI) confirmed that pacer Harshal Patel has been ruled out of the fourth and fifth T20Is against West Indies due to an injury. The board said in a statement that Harshal is yet to recover from his rib injury and this is the reason behind him being ruled out of the series. It is important to note that Harshal did not feature in a single match in the ongoing T20I series.

"Harshal Patel has not fully recovered from his rib injury and is ruled out of the remaining two T20Is against West Indies," the BCCI had said in a statement.

Axar Patel West Indies vs India, 2022 Cricket
Get the latest updates on IPL Auction 2023 and check out  IPL 2023 and Live Cricket Score. Like us on Facebook or follow us on Twitter for more sports updates. You can also download the NDTV Cricket app for Android or iOS.