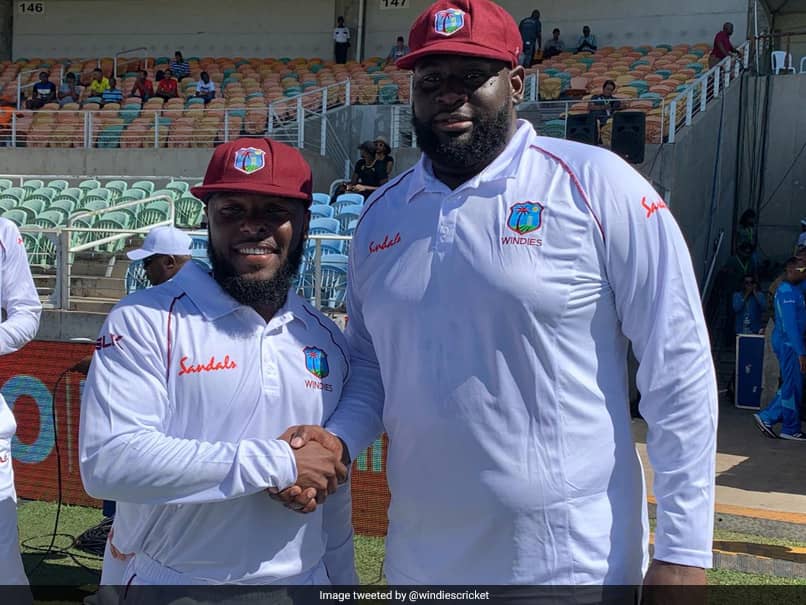 Rahkeem Cornwall, who weighs 140 kilograms, became the heaviest man to play Test cricket when he made his debut against India at Sabina Park in Kingston, Jamaica on Friday. Cornwall broke the previous record held by Australia's Warwick Armstrong who weighed 133-139 kgs. Cornwall, an off-spinner by skill, has a career tally of over 260 scalps at a healthy average of 23.9 in the four-day domestic competitions in recent years. At six feet six inches, Cornwall is well capable of generating uncomfortable bounce. Moreover, Cornwall is an effective lower-order batsman too. With the help of his tall frame, the 26-year-old is capable of hitting the ball with brute force.

The off-spinning all-rounder did not play in the first Test in Antigua when the West Indies were crushed by 318 runs inside four days.

The West Indies won the toss and invited India to bat in the second Test. Skipper Jason Holder said that they hope to exploit the moisture on the green wicket.

Cornwall came in for medium-pacer Miguel Cummins while wicketkeeper-batsman Jahmar Hamilton became the first cricketer from the US Virgin Islands to play at senior level for the West Indies.

He replaced Shai Hope, who failed a late fitness Test.

"There is a bit of moisture here. So we will try to get into India's middle order early. We have a couple of changes. We have to focus on the roles and not the results. We have to be a lot more disciplined. The last time we played here Roston Chase got a fifer," said Holder.

India, on the other hand, did not tinker with their winning combination of the first Test in Antigua.

Virat Kohli said that the first session could be challenging just like it was in Antigua.

"But the advantage of batting first is you have runs on the board and then you can put pressure on the opposition from thereon. That is exactly what we did in the last game even though they had a couple of partnerships," Kohli said.

West Indies Cricket Team West Indies vs India 2019 Cricket West Indies vs India, 2nd Test
Get the latest updates on IPL 2021, IPL Points Table , IPL Schedule 2021 , live score . Like us on Facebook or follow us on Twitter for more sports updates. You can also download the NDTV Cricket app for Android or iOS.