Chris Gayle donned a special No.301 jersey and shared high fives with Indian cricketers after his dismissal in the third ODI, raising speculations about his retirement. 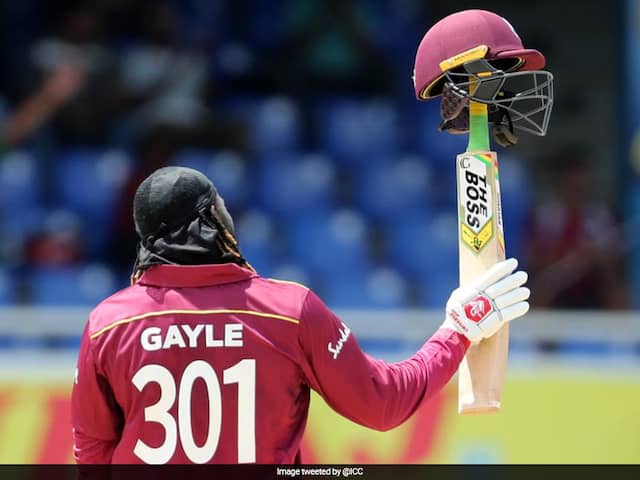 Chris Gayle donned a special No.301 jersey against India.© AFP

Chris Gayle donned a special No.301 jersey, shared high fives with India skipper Virat Kohli and others after his dismissal, and went back to the dressing room carrying on his helmet on top of the bat celebration after his quick-fire knock in the third One-Day International (ODI) against India, raising speculations about his retirement. So much so, that some fans claimed that Chris Gayle has played his farewell One-Day International (ODI) and also posted some heartfelt messages for the veteran opener. However, Chris Gayle, in a short video message, posted by Windies Cricket on Twitter, said, "I didn't announce anything...any retirement".

He also insisted that he will stay around, "until further notice".

Gayle had first opened up on his retirement talks ahead of the World Cup 2019, insisting he would retire after the marquee tournament.

He later reversed his decision and said that he was willing to participate in the home series against India before insisting that he is willing to carry on for as long as possible.

Gayle, 39, played his 301st ODI on Wednesday against India. His quick-fire knock of 72 runs came in a losing cause, as the visiting team sealed the series 2-0.

West Indies will next host India in a two-match Test series, for which Gayle was not included in the squad.