Professional tennis has been in cold storage since March due to the coronavirus pandemic with tournaments unlikely to resume before August. 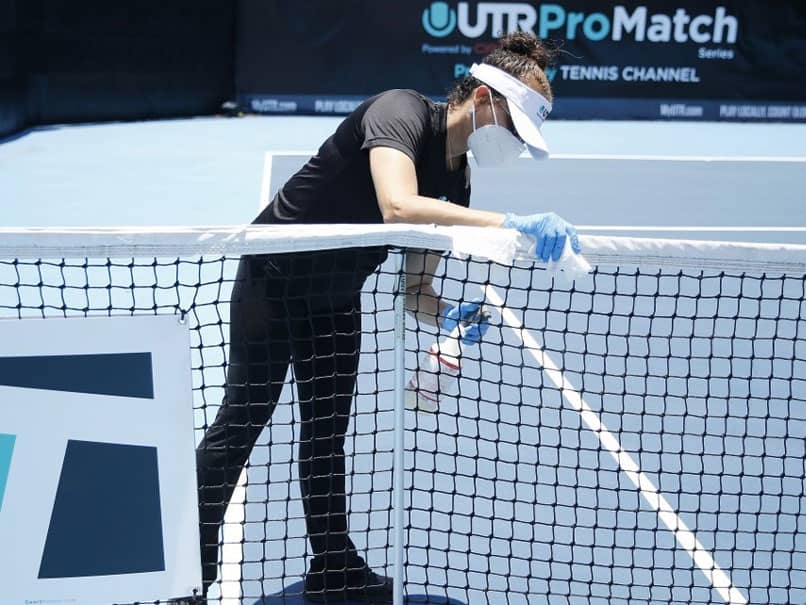 The ATP and WTA tours are both suspended until late July due to the global health crisis.© AFP

Professional tennis has been in cold storage since March due to the coronavirus pandemic with tournaments unlikely to resume before August. The ATP said it will not resume tournament play until the first week of August in Washington. The WTA is still scheduling events in Palermo from July 20-26 and in Karlsruhe on July 28-August 2, for now at least. The French Open has already been moved to Sept 20-Oct 4 although there are suggestions that it may be put back by a further week. Organisers say it could be played behind closed doors. The United States Tennis Association will decide in mid-June on the US Open in New York.

AFP Sport looks at three talking points as the sport heads into June:

Fans in or out at US Open and Roland Garros?

-- In 2019, the US Open attracted a record crowd of almost 740,000 to its sprawling Billie Jean King Tennis Centre in New York.

However, the 2020 editions of the two remaining Grand Slam events on the calendar will look very different with the chance of them being played behind closed doors a real possibility to avoid the spread of the coronavirus.

Roger Federer, whose 20-Grand Slam title haul includes five titles at the US Open and one in Paris, is not keen on seeing rows and rows of empty seats.

"I can't bear to see an empty stadium. I hope that won't happen," the Swiss star was quoted as saying by Brazilian media recently.

Two-time Wimbledon winner Petra Kvitova said she too has no desire to play a Slam with without spectators.

"I would like to play another Grand Slam, but if it's like this, I'd rather cancel them," Kvitova said.

"Playing without fans who are our engine doesn't look nice to me and the Grand Slam doesn't deserve it."

As far as the rescheduled Roland Garros in September and October is concerned, Jean-Francois Vilotte, the director-general of the French Tennis Federation (FFT), told AFP: "The aim is that there will be spectators."

"But we will have the capacity to organise Roland Garros whatever the option decided, including behind closed doors."

-- There has been no prize money to play for over the best part of three months but that hasn't stopped it being discussed.

The ATP and WTA tours, the International Tennis Federation and the four Grand Slam tournaments -- the Australian Open, Roland Garros, Wimbledon and the US Open backed a fund worth more than $6 million to support low-ranked players hardest hit by the coronavirus pandemic.

World number one Novak Djokovic had already said that he, Roger Federer and Rafael Nadal -- the sport's biggest earners with over $100 million each banked in prize money alone -- were also willing to help.

However, world number three Dominic Thiem was not keen on giving money to lower-ranked players.

"Quite honestly I have to say that no tennis player will be fighting to survive, even those who are much lower-ranked," said the Austrian.

Marion Bartoli, the 2013 Wimbledon champion, chimed in last week by suggesting a reduction in doubles events with prize money diverted to struggling players.

"You just don't make the same effort (in doubles) as a singles player. You don't practise so much, your routine is different.

"I don't know if we have to stop doubles completely, but to get less money and give that money to qualification and others, that could be the solution."

Are we making an exhibition of ourselves?

-- There is some tennis going on in the world at a series of tightly-controlled exhibition events.

Germany kicked it off on May 1 with an eight-man exhibition in the tiny town of Hoehr-Grenzhausen, near Koblenz which featured Dustin Brown, who famously defeated Rafael Nadal at Wimbledon in 2015.

Strict rules over health and safety meant there were no fans, no ball boys or girls and no line judges. There was just a chair umpire.

Handshakes were banned, players handled their own towels and brought their own water and fruit to the clay courts.

Similar events followed in the US before Petra Kvitova won an all-Czech event in Prague last week.

"The gloves, face masks, the fact nobody handed us the towels, no handshakes, that was definitely bizarre," said Kvitova.

Andy Murray will return from his latest injury problem on June 23 in a charity tournament in London.

Nick Kyrgios joins Dominic Thiem at a grasscourt event - likely the only one this summer - at Berlin's Tempelhof Airport from July 17-19.

Novak Djokovic Petra Kvitova Tennis
Get the latest updates on IPL 2021, IPL Points Table , IPL Schedule 2021 , live score . Like us on Facebook or follow us on Twitter for more sports updates. You can also download the NDTV Cricket app for Android or iOS.