With the lockdown keeping everyone off competitive sports, ever-new videos are flooding social media. 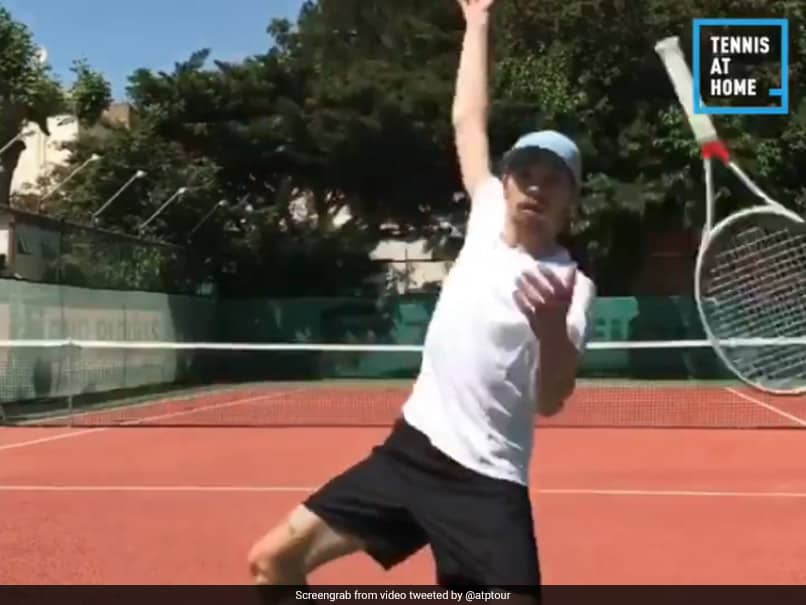 Like all sports, Tennis has also come to a halt due to the global coronavirus pandemic.© Twitter

A serve can prove extremely crucial in a tennis game. Roger Federer, Ivo Karlovic, John Isner and Nick Kyrgios are among the few highly rated servers in competitive tennis. However, a video tweeted by the ATP Tour left many flabbergasted with a never seen before "serve". Along with a hashtag 'TennisAtHome' to urge fans to stay and play at home, the ATP Tour shared the video in which a player can be seen juggling his racquet right before making an impressive serve.

"Ever seen a serve like this?" the ATP Tour captioned the video that was originally shared on Twitter handle '@bensimshot', known for sharing freestyle tennis videos.

The serve video sent Twitter into a spin as many of the fans had a hilarious take on it.

"My return if someone did that to me," commented a user, along with a video of Rafael Nadal's impressive return.

My return if someone did that to me pic.twitter.com/TlQoWodIq9

Another user tagged Nick Kyrgios and asked: "@NickKyrgios please do that next time you face Nadal."

@NickKyrgios please do that next time you face Nadal.

"Would love to see NK try that," another one joined in.

Would love to see NK try that @NickKyrgios

Earlier, the ATP Tour had shared another video tweeted by @bensimshot that showed a man playing with an egg and a racquet while making an omelet. "When you're making breakfast but tennis is life," the ATP Tour captioned the funny video.

When you're making breakfast but tennis is life

Like all sports, tennis has also come to a halt due to the global coronavirus pandemic. This year's French Open has been moved to September, Wimbledon has been cancelled and the WTA tour will not resume until at least July 20.

This week's competition in Prague has eight men and eight women in separate draws but there will be no spectators or handshakes.

There will be referees and ball boys at the tournament, but they will not hand towels to those on the court.