Rafael Nadal, Novak Djokovic And Roger Federer Untroubled At Wimbledon As Monday Proves Not So Manic 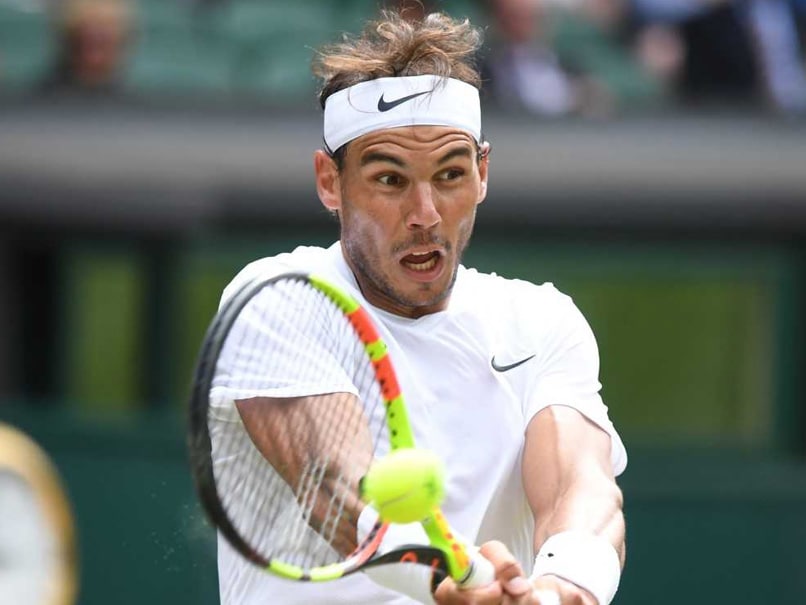 Rafael Nadal and Novak Djokovic eased into the Wimbledon quarter-finals on Monday as the sport's Grand Slam heavyweights continued to deliver blow after blow to their wilting lightweight rivals. Defending champion and world number one Novak Djokovic reached his 11th Wimbledon quarter-final and 45th at the majors with a 6-3, 6-2, 6-3 win over France's Ugo Humbert. Third seed Nadal, the 2008 and 2010 champion, swept to an easy 6-2, 6-2, 6-2 win over outclassed Joao Sousa of Portugal to book his place in a seventh quarter-final at the All England Club. Roger Federer on Monday became the oldest man to reach a Grand Slam quarter-final in 28 years when he booked his place in the Wimbledon last-eight for the 17th time.

Eight-time champion Federer breezed past Italy's Matteo Berrettini 6-1, 6-2, 6-2 in just 74 minutes to make sure of a spot in his 55th quarter-final at the Slams.

It was also his 99th win at the All England Club. At 37, he is the oldest man to reach the last eight at the majors since 39-year-old Jimmy Connors at the 1991 US Open.

Four-time champion and top seed Djokovic will face Belgium's David Goffin for a place in the semi-finals.

Djokovic, 32, has a 5-1 career record over 21st seed Goffin who will be playing in his first Wimbledon quarter-final.

Humbert, the world number 66, had never played a match on grass before this season and was defeated in just one hour and 42 minutes.

"My plan always is to reach the final stages at Grand Slams," said Djokovic who converted five of nine break points on Monday.

"Wimbledon has been a special tournament that has motivated me throughout my life."

Nadal next plays Sam Querrey, against whom he holds a 4-1 record.

The 33-year-old Spaniard is chasing his 19th title at the majors, which would put him just one behind the all-time record of 20 held by Federer -- his potential opponent in the semi-finals.

"A lot of positive things out there. To be back in the quarter-finals is great news for me," said Nadal who took just three minutes more than Djokovic to complete his day's work.

"Happy to be where I am and the body is holding well, playing some good tennis -- and straight sets helps."

Goffin matched his best-ever performance at the majors by reaching his first Wimbledon quarter-final.

In getting to the last eight of a Grand Slam for the third time, Goffin became the fifth Belgian man in history to reach the quarter-finals at Wimbledon -- and, along with Xavier Malisse in 2002, the only one to do so since 1924.

"It's so tough to beat Novak in the best of five and especially here on grass," admitted 28-year-old Goffin.

"Even for Roger, it will probably be the toughest challenge."

Also joining Nadal in the last-eight was his compatriot Roberto Bautista Agut who reached his first Wimbledon quarter-final and second at the majors this year when he defeated France's Benoit Paire 6-3, 7-5, 6-2.

The 31-year-old world number 22 will face either 2016 runner-up Milos Raonic of Canada or Argentina's Guido Pella for a place in the semi-finals.

Paire said he was seriously under-par.

Bautista Agut, who has now defeated Paire seven times in seven meetings, also made the quarter-finals at the Australian Open in January.

With Djokovic, Nadal, Querrey and Bautista Agut all winning, there are already four 30-somethings in the last-eight.

Wins for Federer and Mikhail Kukushkin, who was tackling Kei Nishikori later Monday, would push that figure to six.

Novak Djokovic
Get the latest updates on IND vs NZ 2021, check out the Schedule and Live Score . Like us on Facebook or follow us on Twitter for more sports updates. You can also download the NDTV Cricket app for Android or iOS.