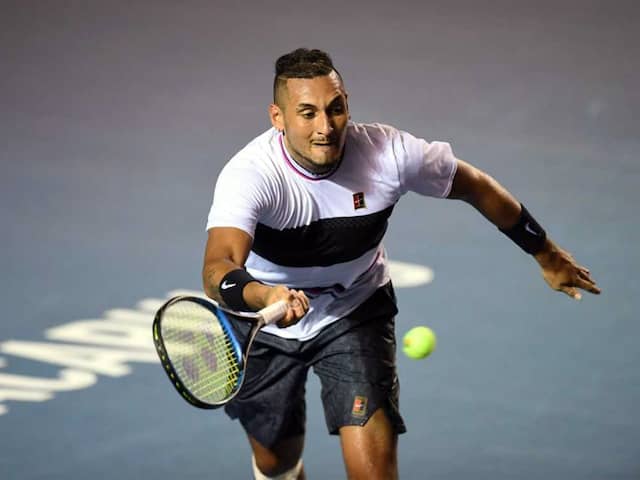 Australian Nick Kyrgios, unfazed by stern words from vanquished Rafael Nadal, produced another gritty win over Switzerland's Stan Wawrinka Thursday to reach the semi-finals of the Mexico Open. A day after his dramatic comeback victory over 17-time Grand Slam winner Nadal, Kyrgios out-lasted Wawrinka 7-5, 6-7 (3/7), 6-4 to book a meeting with John Isner for a place in the final. Third-seeded Isner defeated eighth-seeded Millman 7-6 (7/2), 6-7 (4/7), 7-6 (7/4) in a three hour, five minute marathon on Thursday night.

Kyrgios once again took a twisting path to victory. The drama started in the very first game, when Kyrgios took an awkward fall and badly scraped the knuckles of his racquet hand.

As he received mid-game treatment the crowd grew restive, provoking the unpredictable Australian.

With the problem tended to, Kyrgios closed out the game, the set going with serve until Kyrgios seized upon a couple of loose points from Wawrinka to gain the break and the set 7-5.

A tense second set saw Wawrinka break Kyrgios at love for a 5-4 lead. But Kyrgios broke back as they went to the tiebreaker -- Kyrgios vociferously defending himself when the umpire seemed to find his "let's go" call to Wawrinka hostile.

Wawrinka won the tiebreaker to force a deciding set that saw Kyrgios break for a 3-2 lead he wouldn't relinquish, although before it was over he would exchange words with a critical spectator and provoke Wawrinka by having the trainer on yet again.

Unable to convert two match points against Wawrinka's serve, Kyrgios closed it out in an explosive 10th game, and insisted he relished it all despite complaining of debilitating cramps.

"I love it," he said. "I actually play better when the crowd's against me."

Kyrgios had already brushed aside Nadal's complaint that he lacked respect "for the public, the opponent and himself".

That came in the wake of their second-round match -- during which Kyrgios complained of illness, produced an underarm serve and, finally, taunted fans who booed his win.

"To come out yesterday against Rafa and pull together that three hour performance after getting food poisoning was massive," Kyrgios said. "To back it up against Stan ....

"I was cramping like crazy toward the end of the third set," he added. "I was just trying to scull any sort of fluids and hit the ball as hard as I can it and it ended up working."

Second-seeded Alexander Zverev made it through to the semi-finals for the second straight year with a 6-4, 6-4 victory over Australian Alex de Minaur.

Zverev, who improved to 4-0 against de Minaur, hasn't dropped a set in three matches. He fired 13 aces and broke the Aussie once in each set to line up a clash with Britain's Cameron Norrie, who downed American Mackenzie McDonald 6-3, 6-2.

In women's action, fifth-seeded Sofia Kenin of the United States battled back from a break down in each set to beat former world number one Victoria Azarenka 6-4, 4-6, 7-5.

Azarenka, currently ranked 50th in the world, served for the match at 5-4 in the third before succumbing after two and a half hours.

Comments
Topics mentioned in this article
Nick Kyrgios Rafael Nadal Stanislas Wawrinka Tennis
Get the latest Cricket news, check out the India cricket schedule, Cricket live score . Like us on Facebook or follow us on Twitter for more sports updates. You can also download the NDTV Cricket app for Android or iOS.