Gone With The Wind As Novak Djokovic, Dominic Thiem Blown Off Course At Roland Garros

The semi-final will resume at midday (1000 GMT) on Saturday, organisers said 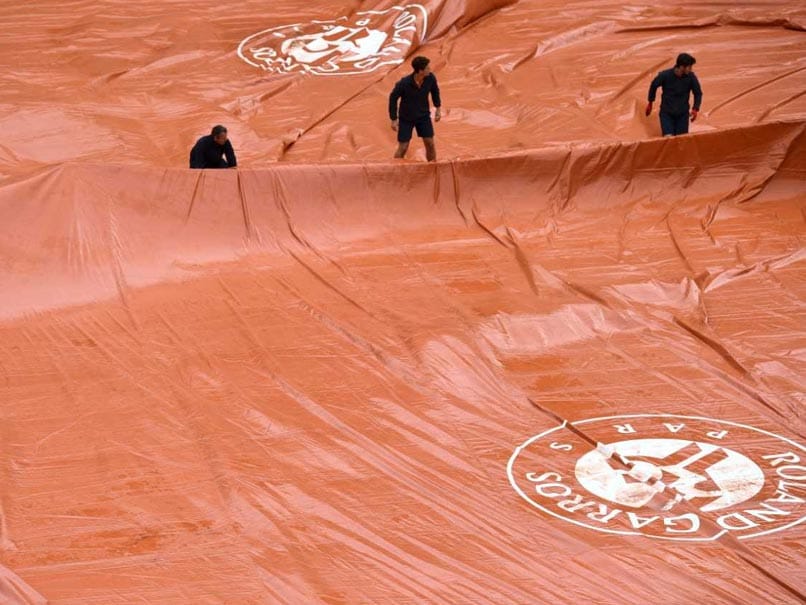 Roland Garros suffered another scheduling blow on Friday when the second semi-final between Novak Djokovic and Dominic Thiem was halted for the night. Organisers said the decision was taken due to the worsening weather conditions but just after play was suspended for the day at 6:45pm (1645 GMT), bright skies appeared over the site. In theory that could have allowed for another two hours of play. Austrian fourth seed Thiem led 6-2, 3-6, 3-1 against the world number one when the players left Court Philippe Chatrier.

The semi-final will resume at midday (1000 GMT) on Saturday, organisers said.

Top seed Djokovic had been increasingly frustrated with the conditions on court with high winds kicking up the clay.

He even summoned the tour supervisor at one stage to complain about the severity of the gusts.

The Serb, seeking to become just the second man in history to hold all four Slams at the same time twice, even asked a bemused Andreas Egli if there was an "extreme wind" rule.

"It hasn't rained for 50 minutes and already play has been cancelled," tweeted Amelie Mauresmo, France's former world number one.

She had already blasted the decision to switch the two women's semi-finals earlier in the day away from Chatrier as a "disgrace".

"I believe that we have hit rock bottom," Mauresmo added.

Tournament organisers said fans holding tickets for the semi-final would be fully refunded as they will not be valid for Saturday.

Djokovic has experienced similar delays before and bounced back during his ongoing 26-match Grand Slam win streak.

He played the last two sets of his Wimbledon semi-final last year against Nadal and returned the next day to beat Kevin Anderson in the final.

Tournament director Guy Forget said the decision to halt play was taken because high winds of up to 80km/h were expected in the evening.

"The players had already stopped twice (for rain) and as the referee will tell you, it is painful for everyone, especially the players," Forget told L'Equipe.

He also blasted stories of Djokovic having left the grounds before play had been called off as completely inaccurate.

"The protocol is that we talk to the players first and then we make an announcement," Forget said.

"I do not know who left first, but the two players were told at exactly at the same time. They looked at each other and said, 'OK'."

Forget's insistence did not dampen speculation over other reasons possibly in play when there was seemingly enough daylight available to even finish the match.

"This is going to sting... these conditions are very difficult for Novak, these are very advantageous for Dominic Thiem," argued the American.

"Nadal and Federer came ready to accept the conditions and so did Thiem. But Novak came ready to not like them. The happiest person right now would be Novak on his way back home."

Whoever makes the final on Sunday will have played every day for four days as both Djokovic and Thiem only completed their quarter-finals on Thursday.

Novak Djokovic Dominic Thiem Tennis
Get the latest updates on IND vs NZ 2021, check out the Schedule and Live Score . Like us on Facebook or follow us on Twitter for more sports updates. You can also download the NDTV Cricket app for Android or iOS.