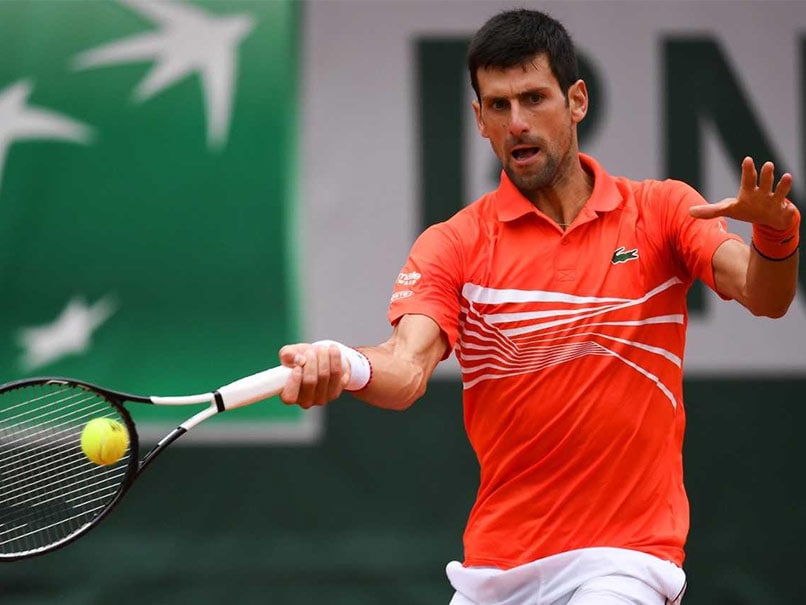 Novak Djokovic on Monday became the first man to reach the French Open quarter-finals for 10 successive seasons while Kei Nishikori set-up the toughest challenge on a clay court -- facing Rafael Nadal. Top seed and world number one Djokovic continued his bid to hold all four Grand Slam titles simultaneously for the second time by thrashing Germany's Jan-Lennard Struff 6-3, 6-2, 6-2. The 32-year-old will now face either ninth-seeded Italian Fabio Fognini or fifth seed Alexander Zverev in what will be his 13th appearance overall in the quarter-finals in Paris.

"It was tricky with the rain, but that's Paris," said the 2016 champion after playing in drizzly conditions.

"I'm really confident with my serve. I hope it continues like that."

Last year he achieved his best run at the Slams, making the quarter-finals where he was defeated by eventual runner-up Dominic Thiem.

"It's going to a great match and a tough battle against Novak, the world number one, it's going to be interesting," said Zverev who is 2-2 against Djokovic in his career.

However, he won their only meeting on clay in the Italian Open final in 2017 in straight sets and beat him in the ATP Finals later that year.

Japanese seventh seed Nishikori came back from 1-4 and 3-5 down in the final set to beat Benoit Paire of France and set-up a quarter-final clash on Tuesday against defending champion Rafael Nadal.

"He almost had it today," said Nishikori who had led two sets to one when the last-16 tie was suspended on Sunday.

"He served for the match at 5-3 but I just tried to fight and play one point at a time."

The 29-year-old Japanese could have wrapped it up in the fourth set when he had two match points but squandered both, the second on a double fault.

Paire, the world number 38 who was trying to make the quarter-final of a Slam for the first time, was eventually undone by 15 double faults and 79 unforced errors.

Nishikori has only defeated 11-time French Open champion Nadal twice in 12 meetings with both of those wins coming on hard court.

The Spaniard, celebrating his 33rd birthday on Monday, has won all four of their meetings on clay.

"It's going to be a tough match, he's the greatest ever clay court player," said Nishikori.

For Paire, it was an opportunity lost.

"I should have lost it in three or four sets but I should have won it in the fifth set," said the 30-year-old.

French interest in the singles ended for another year just a few hours later when 14th seed Gael Monfils was defeated 6-4, 6-4, 6-2 by Austrian fourth seed Thiem, the 2018 runner-up.

Thiem will be playing in his fourth successive quarter-final in Paris where he will face either 10th-seeded Russian Karen Khachanov or two-time semi-finalist Juan Martin del Potro.

The Austrian also pulled off a memorable 'tweener' shot between his legs.

The Romanian third seed raced to a 6-1, 6-0 win as Swiatek failed to hold serve in the match.

"Kind of perfect," said Halep after her win.

The players who stunned top seed Naomi Osaka and 23-time major winner Serena Williams got a taste of their own medicine.

American 14th seed Madison Keys reached the quarter-finals for the second successive year with a 6-2, 6-4 win over Katerina Siniakova, the conqueror of US and Australian Open winner Osaka.

Keys, who went on to reach the semi-finals in 2018, next faces Australian eighth seed Ashleigh Barty.

"I was really happy to close it out as playing three sets in these heavy conditions does not sound like much fun," said the 24-year-old Keys.

Novak Djokovic Rafael Nadal Alexander Zverev Tennis
Get the latest updates on SA vs IND 2021-22, check out the Schedule and Live Score . Like us on Facebook or follow us on Twitter for more sports updates. You can also download the NDTV Cricket app for Android or iOS.