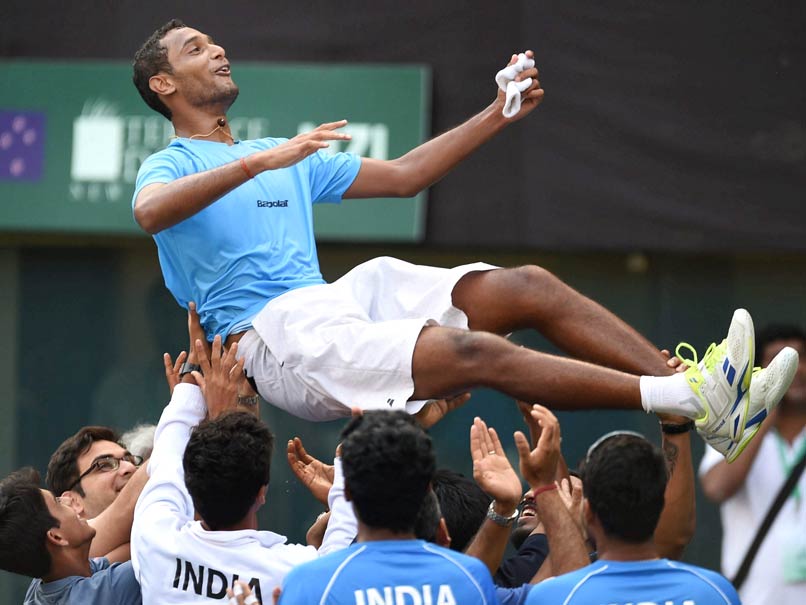 Ramkumar Ramanathan came out with his best game on Sunday to defeat Finn Tearney 7-5, 6-1, 6-0 to help India clinch the Davis Cup Group 1 Asia/Oceania first round at the Balewadi Sports Complex in Pune. India will next take on Uzbekistan in the second round from April 7 to 9 to qualify for the World Group playoffs. Ramkumar routed Tearney with clinical precision as the lanky Indian cruised to a win in two hours in windy conditions to give India an unassailable 3-1 lead. Later in the fifth and final dead rubber, Yuki Bhambri defeated Jose Statham 7-5, 3-6, 6-4 to make it 4-1 in favour of the hosts.

Ramkumar was fluent in his win while Bhambri struggled past Statham as India completed an emphatic victory. Ramkumar sealed the tie for the hosts by thumping Tearney in the fourth rubber before Bhambri won the dead fifth rubber in one hour and 55 minutes.

India now play at home against Uzbekistan, who got past South Korea in their first round away tie.

The 22-year-old from Chennai, with a singles world ranking of 276, was lifted shoulder high by all his team members after his superb show and the entire team made a lap of the stadium with the Indian tricolor.

The resounding victory for India also signaled the end of Anand Amritraj's three-year reign as the team captain as he will be replaced by Mahesh Bhupathi for the second round tie against Uzbekistan.

India had taken a 2-0 lead on the first day when Bhambri and Ramkumar clinched their singles rubbers against Tearney and Statham respectively.

New Zealand clinched the doubles rubber on Saturday when Artem Sitak and Michael Venus got the better ofIndian veteranLeander Paes and Vishnu Vardhan.

Ramkumar clinched a closely fought 51-minute first set and Tearney's game went to pieces thereafter as the Indian seized on the opportunities and ran away with the second and third sets.

The Kiwi player committed a staggering 10 double faults in the opening set, including three in the 12th game in which he was decisively broken by his Indian opponent.

The 6-foot-2-inch tall Indian youngster also had to dig himself out of the hole in two service games in which he faced break points. He saved three in the fifth game in which he committed the first of his two double-faults with the help of his strong first serve clocked at over 200 kmph.

Later he saved the fourth in the 11th game with his fifth ace to lead 6-5 before Tearney self-destructed when serving to be in the set for the second time by committing three double faults, including the last one when he was down 15-40, to hand over the set on a platter to the Indian.

The Kiwi kept the Indian guessing on his serve by alternating between following it to the net and staying behind, but did not have the consistency or power in his serves to take full advantage of this hustling tactic.

Ramkumar put only 51 per cent of his first serve in but won 85 per cent points with it as against 82 per cent of his rival's. Both had four break points apiece and the Indian managed to convert one while Tearney failed with all of his.

Ramkumar, in spite of committing five double faults including three in the third game which he held after saving a break point, raced away with the second set by breaking his error-filled rival's serve twice - in the fourth and sixth games.

In fact the Chennai-born player was lucky that his rival could not convert his mistakes into an advantageous position.

The first break was secured by Ramkumar soon after he made his escape with the help of two unforced errors from Tearney and a net-cord point in his favour as the Kiwi's forehand drive-volley hit the tape and went out to provide the Indian with three break point chances. Tearney dropped serve by burying his backhand into the net.

The plethora of double faults cost the Kiwi his next service game as the Indian took a commanding 5-1 lead and then served out the set in style by acing his rival on the last two points. The second set lasted just 31 minutes.

Ramkumar, by now playing with increased dominance and committing fewer errors, then surged to victory by clinching the third set without dropping a game.

In fact so dominant was the Indian that he came up with some excellent lobs too in the end in the fifth game which the Kiwi lost after five deuces.

Serving for the match and the tie, Ramkumar pounded his serves in with power and put in his last ace to go 40-0 up before winning the match when his rival hit a backhand over the baseline to usher in celebrations in the Indian camp supported by a vociferous crowd.

He was lifted shoulder high by all his team members after his superb show as the entire team ran a victory lap.