A day after India thrashed Sri Lanka by 304 runs at Galle to take a 1-0 lead in the three-match series, members of the victorious team were seen enjoying some downtime. 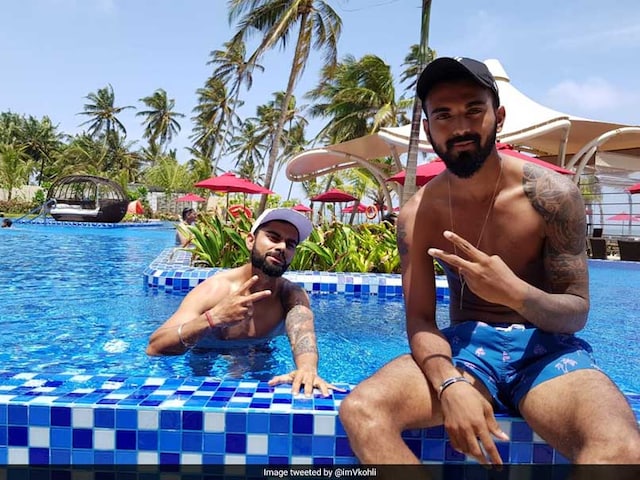 A day after India thrashed Sri Lanka by 304 runs in the opening Test at Galle to take a 1-0 lead in the three-match series, members of the victorious team were seen enjoying some downtime. First, Rohit Sharma posted a picture of an intense FIFA session with his teammates and then it was the turn of Indian skipper Virat Kohli, who took to micro-blogging site Twitter and shared pictures of him and opener KL Rahul relaxing by the pool. Rahul had missed the opening Test due to a flu but seemed in good spirits despite not being part of the playing XI. The post was captioned: "Chilling by the pool. Good times. ?? @klrahul11."

Chasing an improbable 550, Sri Lanka, reduced to nine men after skipper Rangana Herath and Asela Gunaratne were ruled out, failed to put up a fight before being bundled out for 245 in their second innings.

This was India's second ever win against Sri Lanka at Galle. They won at the scenic stadium in 2008 under the leadership of Anil Kumble.

Fun times in the sun with these boys! @imVkohli @klrahul11 pic.twitter.com/YJFodv9dI6

This was India's biggest overseas win (in terms of runs) surpassing 279 run-victory against England at Leeds in 1986.

For Sri Lanka, it was their biggest defeat (in terms of runs), surpassing their 301-run loss against Pakistan in 1994.

Kohli struck his 17th Test hundred with India declaring their second innings at 240 for three and setting up a mammoth 550-run target for Sri Lanka.

In his unbeaten 103-run knock, Kohli faced 136 balls and hit five fours and a six.

In the process, Kohli equalled the records of former Indian skipper Dilip Vengsarkar (116 Tests) and VVS Laxman (134 Tests), who both have 17 Test hundreds.