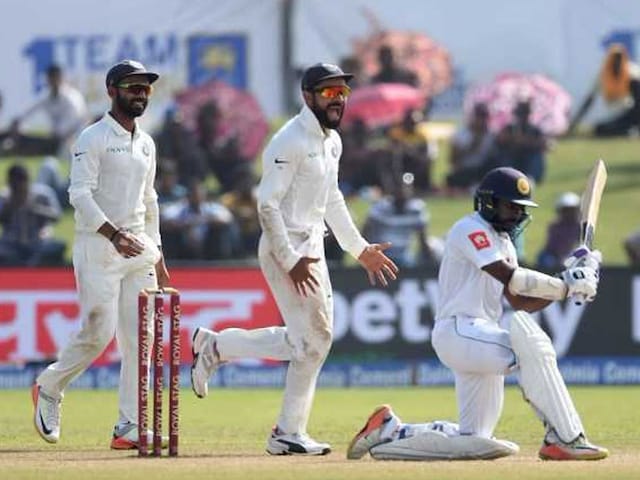 A vastly superior India outclassed an injury-ravaged and out-of-sorts Sri Lanka by 304 runs in the opening Test to bury the ghosts of a humiliating loss at the same venue, exactly two years ago on Saturday. India lead the three-match series 1-0. This was India's biggest overseas win (in terms of runs) surpassing 279 run-victory against England at Leeds in 1986. For Sri Lanka, it was their biggest defeat (in terms of runs), surpassing their 301-run loss against Pakistan in 1994. A gigantic victory target of 550 was out of question for the hosts but they fizzled out in the final session of the fourth day to finish on 245 in 76.5 overs - their innings terminated with injured skipper Rangana Herath and Asela Gunaratne ruled out.

This was after India captain Virat Kohli struck his 17th Test hundred with India declaring their second innings at 240 for three.

The Sri Lankans, especially their opener Dimuth Karunaratne (97) batted gutsily for the first two sessions reaching 192 for 4 at tea.

However Ravichandran Ashwin (3/65 in 27 overs) ran through the middle-order. Once Karunaratne was dismissed trying to play paddle sweep, it was all over for the islanders.

After the tea break, India made short work of proceedings. The breakthrough was achieved in the fifth over after the break. Niroshan Dickwella (67) top-edged off Ashwin with Wriddhiman Saha collecting an easy catch.

Dilruwan Perera (21 no) added 23 runs for the sixth wicket with Karunaratne. The Lankan resistance ended for all-purpose when the latter was bowled off Ashwin, dragging a sweep back onto his stumps. Overall, he faced 208 balls and hit 9 fours.

Herath and Gunaratne were unable to bat owing to on-field injuries. Umesh Yadav (1/42) and Mohammed Shami (1/43) took a wicket apiece at the start of the innings.

In post-lunch, Karunaratne and Kusal Mendis (36) continued their partnership for the third wicket. The two batsmen looked to play for time and cut out any aggressive strokes. They did capitalise on run-scoring opportunities, as this atypical Galle pitch didn't provide much support to the Indian spinners. In all, they put on 79 runs.

Karunaratne scored his 12th Test half-century off 81 balls. Overall, he faced 166 deliveries and hit 9 fours. In doing so, he brought up Sri Lanka's 100 in the 27th over.

In that same over, Mendis survived a DRS review off Ashwin for caught behind as Ultra-Edge didn't show any deviation.

Four overs later, Mendis was caught behind off Jadeja as the DRS review was turned in India's favour, this time an edge clearly detected off the batsman. It became a double blow for Lanka thereafter as Angelo Mathews (2) was caught going for a wild slog at backward point off Jadeja again.

Karunaratne though held his ground and put on another 79 runs for the fifth wicket with Dickewella. The two batted out 22.3 overs until the tea break to defy India's bowling.

In the morning, starting from overnight 189/3, Kohli and Ajinkya Rahane showed an eagerness to score runs.

It was obvious that the visitors were waiting for the captain to get to his landmark before putting Lanka into bat again. And to his credit Kohli didn't waste any time as he reached his hundred off 133 balls in the sixth over of the morning. Overall, Kohli faced 136 balls and hit five fours as well as a six.

In doing so, he equalled the records of former Indian skipper Dilip Vengsarkar (116 Tests) and VVS Laxman (134 Tests), who both have 17 Test hundreds. Kohli reached his milestone in only his 58th Test. The Indian declaration came after the very next over. It was the second highest target set by India in a Test after 617 versus New Zealand at Wellington in 2009.

Kohli and Rahane put on 51 runs for the 4th wicket. In doing so, they became the 14th pair to put up 2000-plus runs in Test cricket for India. Kohli also became the quickest captain to score 1000 overseas Test runs, reaching the mark in 17 innings. He improved Sachin Tendulkar's record of 19 innings.

Comments
Topics mentioned in this article
India Cricket Team Sri Lanka Cricket Team Virat Kohli Ravichandran Ashwin Ravindra Jadeja Sri Lanka vs India 2017 Cricket
Get the latest Cricket news, check out the India cricket schedule, Cricket live score . Like us on Facebook or follow us on Twitter for more sports updates. You can also download the NDTV Cricket app for Android or iOS.