It was the first time that an Indian cricket team registered an all-win record across formats in an overseas tour. 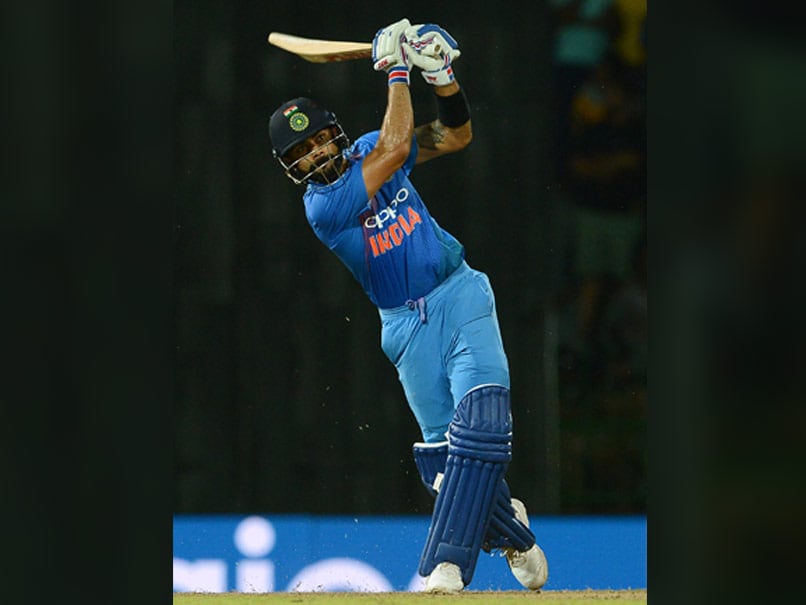 Skipper Virat Kohli scored a brilliant 82 off 54 balls as India won the lone T20I match comfortably by seven wickets on Wednesday. With four balls to spare Manish Pandey (51*) hit the winning runs as India whitewashed Sri Lanka 9-0 across all-formats in a single series. It was the first time that an Indian cricket team registered an all-win record across formats in an overseas tour. Chasing a competitive total of 171, India lost KL Rahul and Rohit Sharma early but Kohli and Pandey had other ideas as they stitched together a 119-run partnership to take India closer to victory.

Playing his 10th T20 match, Munaweera scored a quick-fire 53 off 29 balls with the help of five boundaries and as many as four hits over the fence to keep up Sri Lanka's momentum at the R Premadasa Stadium here.

He was ably supported by Priyanjan, who scored a run-a-ball unbeaten 40 during which he hit one boundary and two sixes to take Sri Lanka to the fighting total.

For India, young leg-spinner Yuzvendra Chahal was the pick of the bowlers with figures of three for 43 from his four overs, while chinaman Kuldeep Yadav scalped two for 20.

At the R. Premadasa Stadium, they put on 119 runs off 78 balls for the 3rd wicket to set up this win as the visitors completed a clean sweep on this tour, having won the Test series 3-0 and the ODI series 5-0 previously.

India witnessed a bad start to their chase with Rohit Sharma (9) top-edging one off Lasith Malinga (1/31) in the third over, although he did put on 22 runs for the opening stand with KL Rahul (24).

Kohli and Rahul then added another 20 runs for the second wicket with the latter a higher contributor as the Indian skipper made a sketchy start against the Lankan pacers.

Rahul was dismissed against the run of play as Dasun Shanaka held a brilliant diving catch at cover off Seekkuge Prasanna (1/25) in the sixth over.

India were placed at 43 for two at the end of the powerplay, and the 50-run mark came up in the seventh over.

Kohli then overcame his patchy start by running hard between the wickets with Pandey. They put on 50 off just 33 balls as India crossed 100 in the 12th over.

The Indian skipper then reached his half-century off 30 balls, which included four boundaries and a six. It was his fourth consecutive half-century in T20Is against Sri Lanka, and in doing so, he became the fastest batsman to score 15000 international runs across formats in 333 innings, improving Hashim Amla's record of 336 innings.

He put up 100 off just 62 balls with Pandey, and their eventual stand surpassed the highest stand for India whilst chasing in T20Is. They improved the 107-run stand between Mahendra Singh Dhoni and Rahul against West Indies in Florida in 2016.

Kohli was finally out caught at deep midwicket off Isuru Udana (1/36). Overall, he hit seven fours and a six. India were just 10 runs away from victory at that point.

Earlier, Priyanjan played a handy knock to save the hosts from the blushes after losing their way in the middle overs once again.

This was after the match started a 55 minutes delay because of wet outfield following rains.

Put into bat, Sri Lanka made a hectic start with Niroshan Dickwella (17) attacking Jasprit Bumrah (1/38) at the start.

It forced India skipper Kohli to introduce spin early into the powerplay in the form of Chahal.

Skipper Upul Tharanga (5) played on a Bhuvneshwar Kumar (1/36) delivery in the third over.

Munaweera then went into an attacking mode as he carted Chahal for two sixes in the next over.

Dickwella added 23 runs with both Tharanga and Munaweera, as Sri Lanka reached 50 for two in the sixth over.

Munaweera kept up the assault on Indian bowlers and hit 5 fours as well as four sixes.

He reached his fifty off 26 balls, the second quickest for a Sri Lankan batsman in this format against India, after Kumar Sangakkara who took only 21 balls.

Using their five-pronged attack, inclusive of three spinners, India rotated the bowlers around.

The turning point perhaps came when Dhoni pulled off a trademark quick stumping to dismiss Angelo Mathews (7) off Chahal in the seventh over.

Munaweera was bowled off Yadav in the 12th over, the bat escaping from his hand as he looked to force a pull and the ball hit the stumps instead.

Two overs later, Chahal returned to strike a double blow as he bowled Perera and then trapped Dasun Shanaka (0) LBW in the space of four balls.

Sri Lanka were crawling by then and were reduced to 134 for seven in the 17th over as Seekkuge Prasanna (11) was caught in the deep off Yadav.

Priyanjan then played a blinder of a knock to help Sri Lanka post a competitive target.

He was watchful at first as Sri Lanka didn't want to lose any more wickets and put on 36 runs off 20 balls with Isuru Udana (19 off 10 balls) for the eighth wicket.

Towards the end, the duo played some unorthodox shots to push Sri Lanka forward.

Comments
Topics mentioned in this article
India Cricket Team Sri Lanka Cricket Team Virat Kohli Manish Pandey Upul Tharanga Sri Lanka vs India 2017 Cricket
Get the latest updates on IPL Auction 2023 and check out  IPL 2023 and Live Cricket Score. Like us on Facebook or follow us on Twitter for more sports updates. You can also download the NDTV Cricket app for Android or iOS.