India vs Sri Lanka, T20I, Highlights: Virat Kohli played a brilliant innings of 82 to power India to a seven-wicket victory over Sri Lanka. 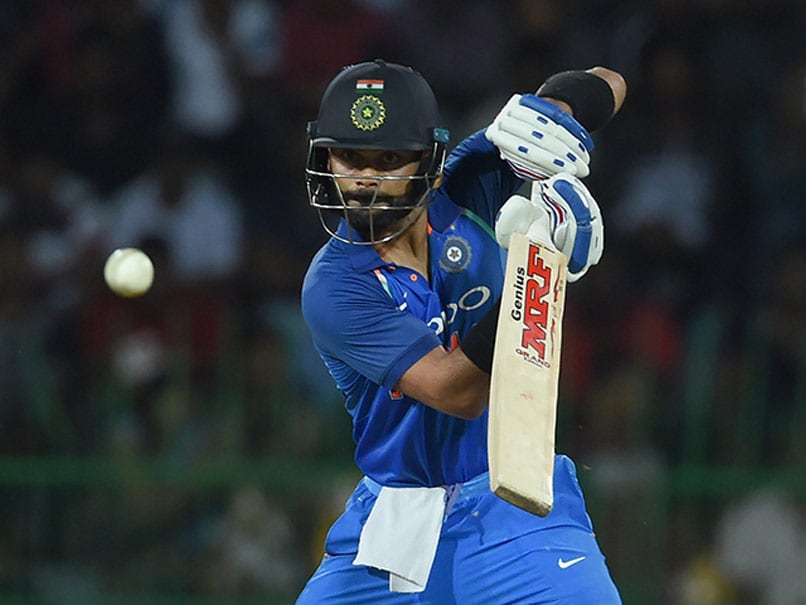 Virat Kohli (82) and Manish Pandey (51*) starred with the bat as India beat Sri Lanka by seven wickets in the lone T20I on Wednesday. It was an all-round performance from the Men in Blue as they outclassed the Lankans to sweep the series 9-0 across all formats. Sri Lanka posted a competitive target of 170/7. India in reply lost both the openers early but were steadied by Virat Kohli and Manish Pandey who stitched together a 119-run partnership. For Sri Lanka, Lasith Malinga finished with the figures of 1/31. (Scorecard)

22:54 IST: Four!Manish Pandey hits the winnings runs as he brings up his half-century.

22:47 IST: Four!Manish Pandey slams Udana for a boundary on the off-side.

22:46 IST:Mahendra Singh Dhoni is the new batsman in.

22:42 IST:Kohli failed to capitalise on the free-hit, gets only a single.

22:34 IST: Four!Virat Kohli slams Malinga straight down the ground just past the umpire as he ducked in time.

22:19 IST: Four!Kohli smashes Prasanna for a boundary straight down the ground.

22:16 IST: Four!Short and wide from Mathews, Manish Pandey puts it away for a boundary.

22:13 IST: Four!Full delivery from Mathews, Kohli flicks it for a boundary.

22:08 IST: Four!Short delivery from Perera, Manish Pandey slams it for a boundary on the leg side.

22:07 IST: Four!Back-to-back boundaries for Kohli. This time punched through the off-side.

22:06 IST: Four!Short delivery from Perera, Kohli welcomes him with a boundary.

22:05 IST:Thisara Perera is introduced into the bowling attack.

22:03 IST: Four! Quicker delivery from Dananjaya outside off, Kohli opens the bat face and gets it wide of short third.

21:58 IST: Six!Kohli dances down the wickets and smokes Prasanna straight down the ground for a maximum.

21:53 IST: Out!Brilliant display of fielding at covers from Dasun Shanaka to dismiss KL Rahul, Prasana gets his first wicket.

21:43 IST: Four!Rahul spots the slower delivery, waits and punches off the back foot.

21:31 IST: Four!Full delivery outside off,Rahul opens the face of the bat and lifts it over backward point.

21:28 IST: Four!Mathews strays on the pads, Rohit glances the ball past Malinga at short-fine leg.

21:25 IST: Four!Short and wide from Mathews, Rahul cuts it handsomely to get off the mark in style.

21:24 IST:First ball, Rohit punches Mathews off the back foot, India get first run on board.

21:23 IST:Angelo Mathew will start the proceedings for Sri Lanka.

21:04 IST: Four!Ashan Priyanjan starts off the the last over with a cheeky boundary past the short third man.

21:02 IST: Four!Jasprit Bumrah gets his yorker wrong, Udana slams the ball for a boundary.

20:51 IST: Four!Seekkuge pulls Kuldeep, Chahal makes a mess of it on the boundary and the ball rolls away for a boundary.

20:39 IST: Out!Chahal gets his second wicket of the over, dismisses Dasun Shanaka for a duck.

20:37 IST: Out!Yuzvendra Chahal gets his second wicket of the night, removes Thisara Perera for 11.

20:36 IST: Six!Perera comes down the track and slams Chahal straight down the ground for a huge maximum.

20:24 IST: Six!Short from Kuldeep, Priyanjan clobbers him for a maximum.

20:20 IST: Six and a four!!Munaweera is dealing in boundaries right now.

20:18 IST: Six!Munaweera comes down the track and slams Chahal for a maximum.

20:12 IST: Out!!A tossed up delivery outside off from Chahal, Mathews fails to make contact, Dhoni gathers and removes the bails in a jiffy. Mathews departs for 7. Sri Lanka 62/3 in 6.3 overs.

20:09 IST: Four!Munaweera comes down the track and lofts Axar over mid-off.

20:08 IST: Four!Munaweera is on fire, heaves Axar over mid-wicket for a boundary.

20:07 IST: Four!Angelo Mathews welcomes Axar with a boundary on the leg side.

20:06 IST:Axar Patel introduced into the attack.

20:03 IST: Out!Jasprit Bumrah gets India back in the game, cleans up Niroshan Dickwella for 17.

19:56 IST: Six!!Back-to-back maximums from Munaweera off Chahal. The crowd is certainly enjoying the fireworks. Munaweera races to 21 runs off seven deliveries.

19:55 IST:Yuzvendra Chahal introduced into the bowling.

19:53 IST: Four!What a way to get off the mark, Dilshan Munaweera cover drives Bhuvneshwar.

19:47 IST: Four!Dickwella flicks Bumrah over square-leg for the first boundary of the innings.

The team talk ahead of the one-off T20I #SLvIND pic.twitter.com/ZIh1BzgYcQ

UPDATE- The toss has been delayed. Inspection at 7 PM #SLvIND

18:15 IST: It has stopped raining.It seems the play will be underplay soon. Stay tuned!

It has stopped raining and the covers are coming off now #SLvIND pic.twitter.com/7vVsmRhK95

17:59 IST: Ahead of the T20 match, Indian opener Shikhar Dhawan extended his support to the team.

17:56 IST: Some bad news for the fans.Rain might interrupt the start of play.

Glum and gloomy scenes here in Colombo ahead of the one-off T20I #SLvIND pic.twitter.com/hjNrcAgw4E

17:55 IST: Hello and welcome to the live blog of the T20 match between India and Sri Lanka.

India are on an experimentation drive ahead of the 2019 50-over World Cup and one name they could have tried here is Rishabh Pant, who was not named in the squad. It is all the more surprising since the selectors had an opportunity to send him for this stand-alone game when Shikhar Dhawan returned home to tend to his ailing mother this past weekend, leaving Ajinkya Rahane to open the innings in the fifth ODI.